The founding father of virtual reality, Jaron Lanier does not consider Facebook and Google as social network platforms. Rather he labels these tech giants as behavior modification empires.

At the TED2018 in Vancouver, Canada, Lanier spoke about the rise of digital culture and how it has gradually turned into a haunted vision. He commenced the session with, “so we talked about extinction as being one and the same as the need to create an alluring, infinitely creative future. And I still believe that that alternative of creativity as an alternative to death is very real and true, maybe the most true thing there is.”

Flashback to the Roots of Digital Era

During his earliest TED Talk in the 1980s, Lanier demonstrated the concept of virtual reality to the world. All through that time, he spoke about virtual reality as a transitioning tool for exploring, building and nurturing a culture around the technology.

While at TED2018, he paraphrased a statement from Norbert Wiener’s book “The Human Use of Human Beings” written in the 1950s. The author wrote, “One could imagine a global computer system where everybody has devices on them all the time, and the devices are giving them feedback based on what they did, and the whole population is subject to a degree of behavior modification. And such a society would be insane, could not survive, could not face its problems.” Weiner summarized this concept as a mere thought concept and such a world is infeasible.

Reflecting on the note now, Lanier said that this is where we have reached. This is what Weiner was afraid of even in writing. It is a time to undo all that has gone wrong, beginning from the roots of digital culture in the 90s.

The foremost mistake, still prevalent, was to establish internet as “pure public commons”. Yet the tech entrepreneurs desired to earn from this free platform, ultimately giving birth to – “advertising” model. And then there was the rise of free Google, free Facebook, all accompanied by ads. 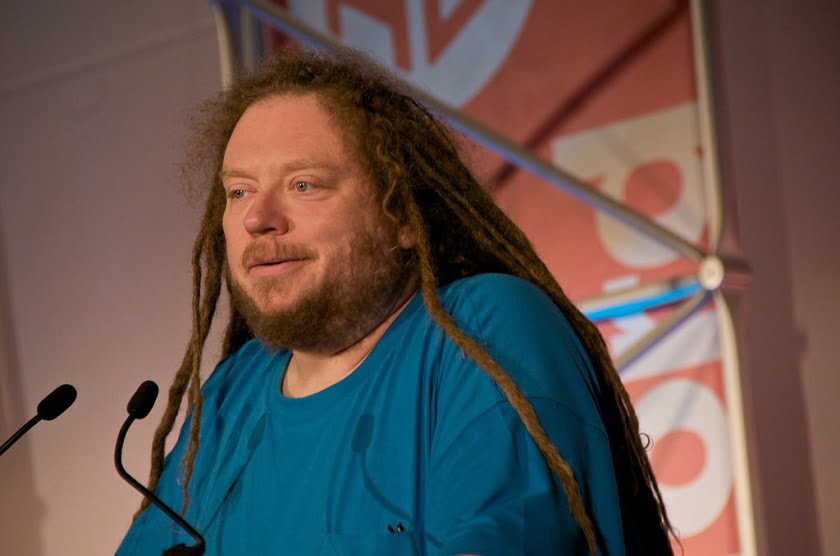 At the TED2018 in Vancouver, Canada, Lanier spoke about the rise of digital culture and how it has gradually turned into a haunted vision. Source: JD Lasica via Flickr

But there was a different model during the earlier phase of social media advertisement. There were local ads, for instance, a dental clinic located nearby, which really made sense to the users. However, a new need of Big Data analyzers emerged later on. And now we have cheaper and efficient computers with even bigger information loaded free internet sites. Now the internet cannot be really identified as a social networking platform. Instead, heavily dependent on advertisement model, Facebook and Google have now turned into behavior modification empires.

The founders of online platforms have known that their entities have the potential of altering human behaviors through a range of stimuli. Lanier commented, “So, on social networks, social punishment and social reward function as the punishment and reward. And we all know the feeling of these things. You get this little thrill — “Somebody liked my stuff and it’s being repeated.” Or the punishment: “Oh my God, they don’t like me, maybe somebody else is more popular, oh my God.”

So here is a grounded truth in the books as well as the reality that the impact of negative stimuli is cheaper and spreads faster than positive stimuli. This has resulted in the global dilemma that we have gotten into ourselves!

Jaron Lanier is highly concerned about the mirage of democracies invented by Facebook and Google. The free model has given rise to the proliferation of fake news, online abuse, unreliable information, conspiracy theories and interference in each other lives.

Lanier emphasizes, “The alternative is to turn back the clock, with great difficulty, and remake that decision.” Going ahead, he mentions about two consequences while renovating the internet basic system.

First, there would not exist a term like ‘free internet’. The loyal followers of internet world would have to pay a minor fee for the search, social networking and others. Yeah, this seems a bit weird to pay for things similar to ubiquitous oxygen and water.

Secondly, sites like Netflix, Amazon, and HBO have successfully transcended this free culture. They are providing quality TV for a subscription fee and people are paying for it. That’s a move towards clean digital culture.

In Lanier’s own words, “We now are in this period called “peak TV,” right? So sometimes when you pay for stuff, things get better. We can imagine a hypothetical world of “peak social media”. ”

Lanier strongly believes that Google and Facebook are also victims of their own free model as are their users. The time has come that these platforms to remake their decisions. There is an immediate urge to distance them from being behavior modification empires.

An advocate of humanism and sustainable economics in a digital context, Lanier is doubtful whether we would be able to survive if we do not mend the internet. He said, “We cannot have a society in which, if two people wish to communicate, the only way that can happen is if it’s financed by a third person who wishes to manipulate them.”

In fact, while concluding the session, he suggested the audience to delete their accounts, if the companies stay stubborn on remaining as behavior modification empires.