How will 5G connectivity boost safety in autonomous vehicles?

The upcoming technological revolution will be based on 5G connectivity. The hype of 5G, short for, the fifth generation of mobile data wireless technology, is riding on the peak at this time.

Though the 5G network is on the horizon of practical application at a global level, its potential is presently experimented in several fields from telecommunication to the Internet of Things devices, smart cities and autonomous vehicles.

The future of mobility is all about electric vehicles, flying cars, ride-hailing services and autonomous means of transport.

However, the giant auto brands Toyota and General Motors are still not a part of this group as they still favor a competing Wi-Fi-based technology.

Nonetheless, the mission of 5GAA is to develop breakthrough innovations for future mobility ecosystem and transportation service. The 5GAA then began working on a technology called C-V2X (cellular-vehicle-to-everything) employing 5G architecture.

In fact, it is actually believed that the autonomous vehicles will become an omnipresent event only when 5G connectivity will become full-fledged operational. 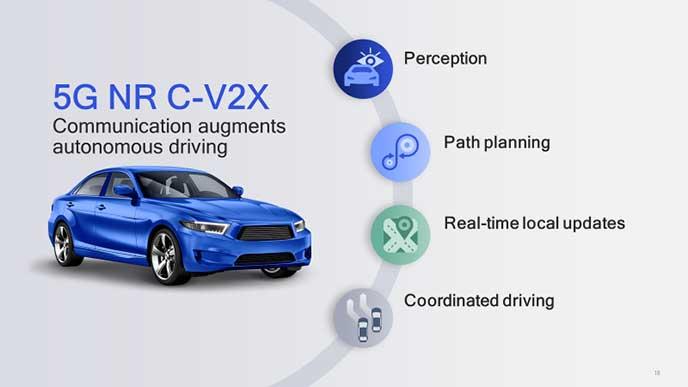 Earlier in May this year, Qualcomm spoke about a possibility of autonomous vehicles communicating to each other on the go on the basis of 5G connectivity. “This mode of operation can operate without dependency or reliance on wide area network coverage,” said Durga Prasad Malladi, Senior Vice President, Engineering, Qualcomm Technologies.

The tested vehicles exchange wireless signals 10 times per second and present specific data like warnings about pedestrians nearing the car, forecast storms news, and any accidents incident happened on the road ahead. All these information is displayed in the form of pop-up alerts on drivers’ dashboards or windshields.

Stretching on the potential of 5G connectivity, the autonomous cars would know in advance when a vehicle driving far ahead them intends to change lanes or start or stop, even if it is beyond their line of visibility.

This incredible system enables autonomous cars to better plan out their routes which include the advanced level of “predictability and determinism” and boost safety factor on roads.

On August 14, 2018, a new experiment in autonomous vehicles was carried out at Colorado. This time, the participating vehicles in the experiment were connected to the traffic light. The feature allowed drivers to know about the change in traffic light colors in advance. So how would this information help the autonomous driving ecosystem?

The advocates of C-V2X mentioned that the generated data would aid autonomous vehicles to avoid accidents. Plus it would also ease out traffic congestion and cut down on greenhouse gas emissions during stops.