Unveiled today, the 1st of September 2016, at IFA in Berlin and due for shipments on September 16 for 530 USD and above, the HP Pavilion Wave PC outstandingly hoots everyday activities. In spite of being boxy and ugly, it is looks like a triangular compact desktop running your music tracks or streaming your Saturday night movie choice. 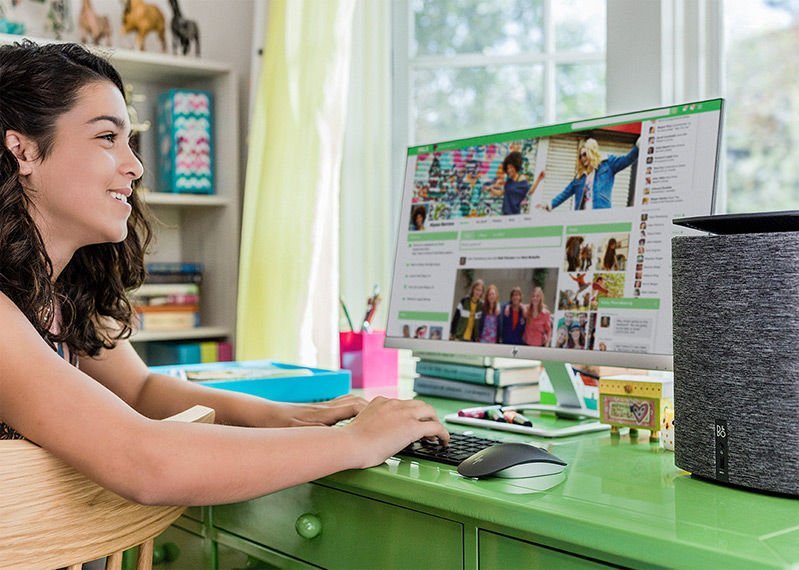 In spite of its little size, the Pavilion Wave can handle all your digital requirements. HP hopes that through this invention they will reach out to consumers who have cut off traditional PC’s by offering them lots of power in this friendly package.

Covered in a gray woven fabric, it looks more like a table speaker than a computer. The look modernly enough conveys its features and the speaker-like compact design makes it fit anywhere. The dimensions roughly boast a 9” height and 6” width.

It resembles merely to the Amazon Echo. The central body is mainly a single top-firing speaker, featured for 360-degree sound. A parabolic reflector on the very top thrusts the sound externally. The sound waves take advantage of the unique parabola that tops the system.

The parabolic speaker redefines the desktop

Whilst will not replace big shelf speakers for your entertainment surround-sound system, it’s a pretty vigorous sounding device for a compact desktop. Especially as we consider the fact that most Pc’s don’t have built-in speakers at all.

The parabola on top is certainly something exclusive. It has been designed with a combination of plastic and metal, connected to it through vacuum metallization. An EVA foam core improves sound quality and dissipates heat. Like the sound, the hot system hair is siphoned up through the middle body of the PC, through the parabolic reflectors and out of the system.

Despite the vent at the top, HP officials claim that the compact desktop functions as swiftly as a notebook PC. The mono 360-degree speaker is mechanized by Bang and Olfsun technology making it a wonderful listening device. As a Windows 10 system, the Pavilion Wave will comprise of Windows Cortana as the digital assistant.

HP Inc. collaborated with Intel to transcend the design for supreme Cortana performance, once testing it with a range of 8 speakers around it. Through this, they determined how the Wave’s far-field listening system would pick up a command while the speakers exhilarated real background sounds.

HP Inc. will offer the Pavilion Wave in an array of Intel Quad-core CPU dimensions, from 6th Generation Core i3 through Core i5. The systems will also support up to a 2 TB hard drive and 128 GB SDD and 16 GB of RAM. It will offer a USB-C port, as well as three USB 3 ports, HDMI-out, display port, Gigabit Ethernet and an SD card reader.

The Hp Pavilion Wave Pc will have a price range of $529.99 up till $699.99 for the three basic configurations. Two basic models will offer Intel integrated graphics. Moreover, the top end configuration will add discrete AMD-powered graphics. Consumers can compose the system as per their requirements on the HP website, including exchanging the Core i5 CPU for a faster Core i7, but that will lead to an increase in price.