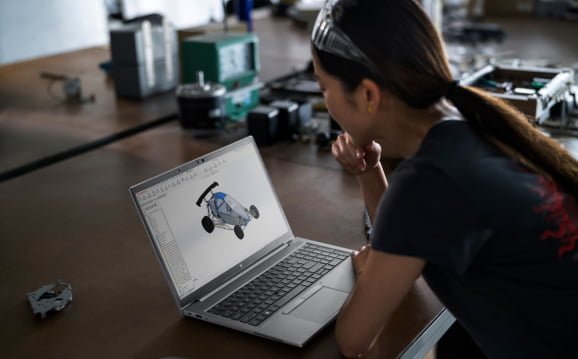 HP recently announced a new WFH lineup of mobile workstations, including its first ZBook Studio x360, which is a convertible 2-in-1. The laptops will include options for Intel’s new Coffee Lake H-series processors.

The ZBook Studio x360 is the most exciting of the bunch. HP claims that the 15-inch screen makes it the brightest 4K laptop, and it works with a stylus that offers over 4,000 levels of pressure sensitivity. It will come with either Core i5 or Core i7 Coffee Lake processors or Xeon processors and Nvidia’s Quadro P1000 GPU. You can get it with up to 32GB of RAM and up to 2TB of SSD storage. It will start at $1,499. A standard clamshell version, the HP ZBook Studio, will begin at $1,299.

The company is also updating the ZBook 15 and ZBook 17, though pricing is not yet available. Both models come with a range of Coffee Lake-H or Xeon processors, Quadro GPU options, or AMD’s Radeon Pro graphics. A user can configure the laptop models to an unfathomable 10TB of storage and 64GB of RAM. The 17-inch version laptop comes with a tool-less design for easy upgrades, by merely slipping off the bottom cover.

HP is also working on the ZBook 15v, an affordable workstation with a starting price of $949. This version includes the Coffee Lake Core Series or Xeon processors, 4TB of storage, and Thunderbolt 3. Many of these notebooks are equipped with advanced security and privacy features, like vPro for remote management and SureView Privacy screens, to keep people from peeping into the display.

The laptops feature up to HDR supported 4K UHD displays. The lineup maxes out at 550 nits on the 14-inch 4K UHD IPS option for the ZBook 14, with enough brightness for indoor and outdoor use. The displays of the laptops can lay almost flat, with the ability to open at 170 degrees. The ZBook 14 and ZBook 15 have dynamic power CPU/GPU switching features and a Z Power Slider for different workflows. Both the ZBook 14 and ZBook 15 are most likely to be available around August 2020.