So, what’s so unique about it design?

The HTC U11 uses a 3D glass finish both at the front as well as at the back. If you squeeze the device with one hand, it allows you to launch certain applications from the home or lock screen. For instance, you can click a picture just by squeezing HTC U11’s frame. You can also customize how hard you need to squeeze in order to make something happen. This so-called “Edge Sense” technology is without a doubt a standout feature.

It’s amusing how you can launch an app, or do tasks such as click a selfie or pick up a call without having to press any visible physical button or sensor. By the looks of it, the Edge Sense technology on HTC U11 will work well with bumper cases or soft cases and gloves, but not with hard cases. It’s not surprising if you think about it! 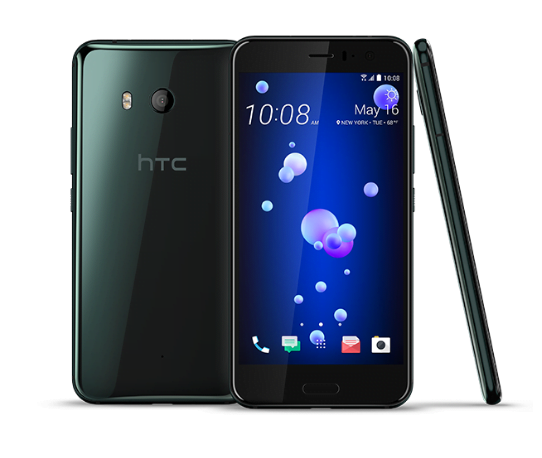 The HTC U11 is also the Taiwan-based company’s first IP67 dust and water resistant phone. (The IP67 certification allows for 1m submersion for 30 minutes. Gold standard smartphones, such as the Apple iPhone 7 and 7 Plus also come with an IP67 rating. All IP tests are conducted under lab conditions when the phone is on standby mode, and so shenanigans such as attempting to take pictures while you’re in the swimming pool are discouraged. This makes the HTC U11 ‘splash, dust and water resistant.’)

HTC also plans to launch a tool through which one can customize the squeeze function. This tool will work for tap and double-tap. A Beta version of the tool will be available from July 2017 and the software will be called Edge Sense Companion.

The HTC U11 comes with four microphones on board. Moreover, it is always on listening mode and will trigger the microphone closest to you to produce a more accurate voice transcription. Theoretically, this makes the HTC U11 a sibling to Amazon Alexa or Google Home.

The HTC U11 features a 12MP UltraPixel 3-branded unit with 1.4 micron pixel size, f/1.7 aperture, optical image stabilization, a dual-LED flash, and 4K video recording. It has 6-lens system on it. The device incorporates the all new Ultra Speed Auto Focus, which worked similar to the dual-Pixel technology. In addition, slow motion video can be captured in 1080p at 120fps. According to camera gurus, the HTC U11 camera scored 90 at DxoMark, making it the highest ever rated on the website.

The HTC U11 comes with U-sonic headphones. You will also need to connect the headphone using USB type-C, as there is no 3.5mm audio jack. It also uses one touch Audio calibration for hearing. In addition, the headphones come with active noise canceling as standard.

Its Liquid Surface design mimics waters reflection. Moreover, the HTC U11 uses Optical spectrum hybrid deposition process for getting the color on the device.

The HTC U11 is a powerful device incorporated with the latest Qualcomm Snapdragon 835 processor, a 6GB RAM and 12GB of storage. Better, it comes with the latest Android 7.1.1 Nougat operating system.

We expect the HTC U11 to be priced nothing below $650 USD. It’s going to be mildly expensive, and you’ll have to squeeze your wallet to have a go at this one. Pre-orders begin today via HTC itself and Amazon.com. HTC will begin shipping for U11 in June, although it is yet to offer a specific date or the exact pricing.