IBM’s conversational AI system, Project Debater made a debut appearance at IBM’s Watson West site in San Francisco, on June 18. In presence of a pack of technology journalists, Project Debater contested against two Israeli debate experts and won the competition straight off.

IBM Research team is continuously working on broadening artificial intelligence (AI) relevance across varied disciplines. It has earlier invented “Deep Blue” that squared off against chess world champion Garry Kasparov in 1997. Following this in 2011, IBM Watson took on the top human champions on the game show, Jeopardy.

And now joining the long list of established IBM’s AI inventions is Project Debater. It has encroached into a new territory of human intelligence that is, mastering a language. The conversational AI system could soak in huge and assorted sets of information and viewpoints. It can then be helpful for human while building persuasive arguments and making well-informed decisions. 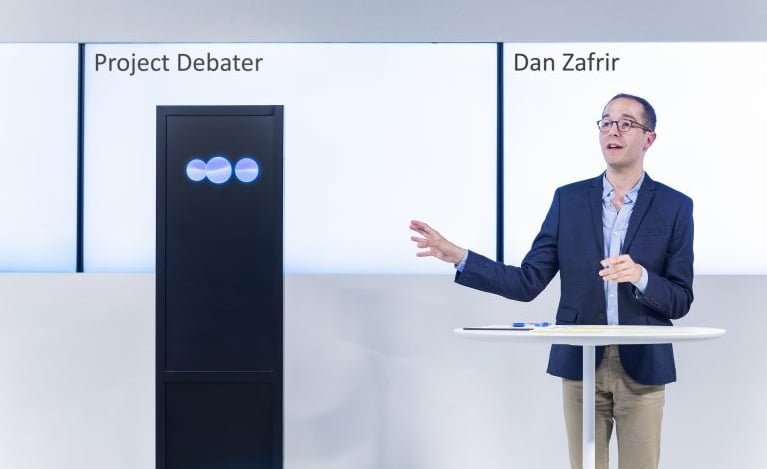 The Project Debater encroached into a new territory of human intelligence that is, mastering language.

Project Debater contested against Noa Ovadia, the 2016 Israeli national debate champion on the topic, “We should subsidize space exploration.” The second competition was held against Dan Zafrir, another Israeli debate expert. They argued for and against on the topic statement: “We should increase the use of telemedicine.”

The structure of both the debates was same. Project Debater took time to gather information on the given topic and then started a four-minute opening speech. It then listened and processed its opponent’s 4-minutes opening remarks. Finally, both the participants closed the debate by summarizing their point of views in two minutes. In between, Project Debater took few minutes to deliver its rebuttal remarks on the opponent’s arguments.

Following this, the attendees voted on their opinions before and after the debate. This was done so that IBM could assess on Project Debater’s performance against its human opponents.

“Debate is more nuanced than other competitions, but voting on debate performance by attendees to the event mirrored results found in the lab, which found that humans are often given a better speech while AI generally outperforms human ability to enrich the audience’s knowledge,” mentioned Project Debater manager Ranit Aharanov.

The Most Complex AI System

In Arvind Krishna’s (IBM Research, Director) own words, Project Debater was the most difficult and complex artificial intelligence innovation from IBM. For six years, IBM Research team at Haifa in Israel studied three competencies to be installed in AI systems. First one is, data-driven speech writing and delivery; secondly, listening comprehension that can recognize major claims buried within long continuous spoken dialogues; and lastly giving a framework to human queries in a unique knowledge graph to enable ethical discussion.

“For example, by helping to identify financial facts that either support or oppose a financial thesis or by presenting pro and con arguments related to public policies. Project Debater could be the ultimate fact-based sounding board without the bias that often comes from humans,” Krishna added in the blog post.

However, IBM Research team knows that Project Debater still has a lot of scope of improvement. During the debate competition, it put some wild arguments and misquoted references at few stances.

“Project Debater must adapt to the human rationale and propose lines of argument that people can follow,” Krishna admitted. “In a debate, AI must learn to navigate our messy, unstructured human world as it is — not by using a pre-defined set of rules, as in a board game.”