Due to hectic lifestyle patterns, various gaming mediums are focusing on developing portals which keep the human body active. Certain video games like Pokémon Go, Dance Dance Revolution, and WiiFit try to cater to such fitness needs. But none of these fulfill the purpose as well as gym equipment might. With this in mind, a German startup dubbed Icaros has come up with a fitness device which makes working out a fun activity. The Icaros fitness device provides a virtual reality experience which allows the user to exercise while enjoying a game. As the user is fully immersed in the game, working out does not seem as tedious as it does in a gym.

The virtual reality gym was displayed at the CES 2017 held in Las Vegas. On seeing it for the first time, it gives the impression of a peculiar piece of technology. But on closer inspection and observing the way it works, this fitness equipment contains a full-body gyroscopic system. For the virtual reality experience, one has to equip the device with a Samsung Gear VR headset, HTC Vive, or Oculus Rift. The user will witness a flying or gliding experience through the strapped VR headset and navigate the environments of the game while working out. 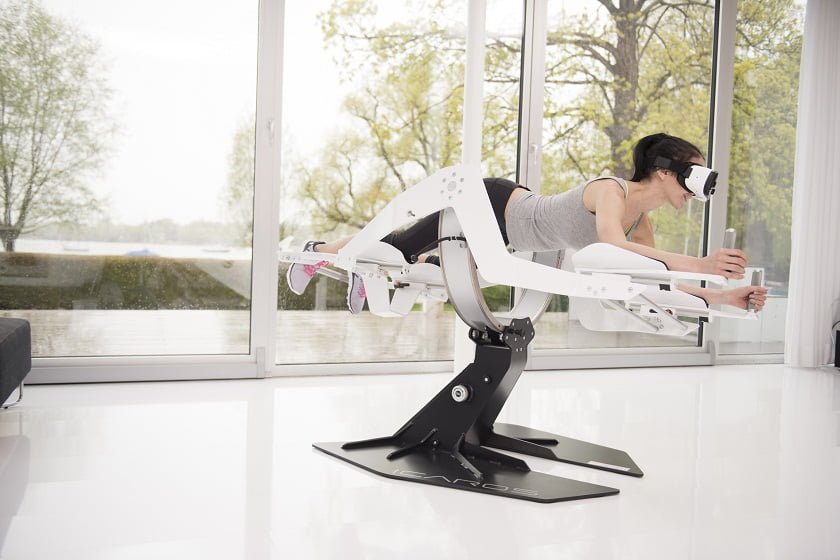 How to enjoy the workout session with the Icaros fitness device

The setup of the Icaros fitness device requires the user to take a plank position on the device. This position helps in activating one’s core while exercising. The individual can select a game on his VR headset in accordance with his physical abilities. As the stamina increases, one can gradually increase the exercise benefits by choosing difficult settings. With the enhancement of virtual reality, the user gets the illusion of flying in the sky or diving underwater. The movements of the virtual reality gym will correspond to the activity going on in the headset.

The CEO and co-founder of Icaros, Johannes Scholl claims that the fitness equipment is a combination of an exercise machine and a virtual reality flight simulator. Due to this, the user feels like Superman while working out. According to the game on the VR headset, the device activates the individual’s core to move about through varying degrees of rotations. This assures a workout regime for the entire body. The cost of the Icaros fitness device is $8,000.