There are so many speculations surrounding WWDC products. The major WWDC announcements revolve around software, especially Siri and Artificial Intelligence. The rumors regarding the debut of iMessage on Android has created quite a stir around the world. Individuals are so excited to receive this feature on their Android device, which iOS users love to flaunt and swag. There’s a possibility that Apple will introduce iMessage on Android at its keynote event today in San Francisco.

Also Read: This Is How Techies Will Stay Entertained Amid WWDC Announcements 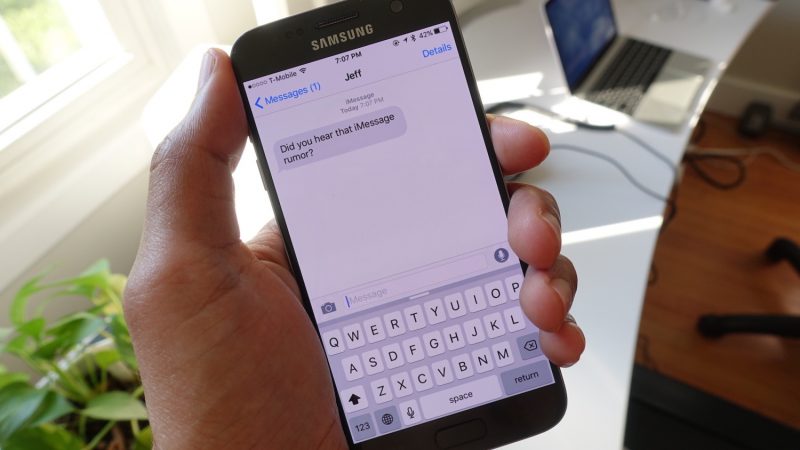 With the introduction of iMessage on Android, more users can experience end-to-end encryption. This is a huge deal because not even the company has the access to read chats on iMessage. WhatsApp already offers this kind of security to Android and iOS-powered devices. But, the migration of Android users from normal texts to Apple’s iMessage would offer a higher resolution in images and greater audio quality compared to normal messaging.

Similar to WhatsApp, iMessage on Android will offer read receipts and also the icon “…”, which will signify that the individual on the other side is typing.

Apple is trying to focus on the service that means it is opening specific avenues that are beyond its OS X and iOS platforms. This makes sense because the company launched Apple Music Beta for Android. According to the sources, Apple has plans to add payments, which are person-to-person, to iMessage App. A similar feature is currently available for messages on Facebook.

If Tim Cook does decide to launch iMessage on Android, the initiation could be a huge deal for Apple considering its not-so-stellar record for supporting other OS. Previously, the company has been subjected to heavy criticisms over the app’s tendency to hold texting powers of the user if they move to Android. Over the same matter, Apple was even dragged to the court. Now establishing the iMessage App on Android platform would certainly ease the transition.

With every passing day, the popularity of Android market is increasing. In fact, Android has surpassed Apple this year to become the leading operating system across the world. The Android market is growing at a super speed. In order to stay in the competition, Apple needs to establish harmony with its rivals. It’s a type of strategy. Microsoft CEO Satya Nadella has understood the importance of tuning with competitors, no wonder why Microsoft released Windows Apps for Android this year. Now, following the footsteps of Microsoft, Apple CEO Tim Cook has offered a friendly hand to Google’s Android with sheer hopes to win back the appreciation and support from Android crowd for Apple. Appealing the massive crowd of Android is going to profit the iOS giant heavily and Tim Cook being a shrewd man he is, knows exactly how to appeal. He plays to win, and the arrival of iMessage on Android is one such step.

More importantly, Mac or Android users could take advantage of the seamless experience of messaging connected between desktop and smartphone. With the introduction of this feature, users all over the world would be able to leverage the absolute comfort of Apple’s ecosystem.