Inside the IBM Watson Cognitive Dress 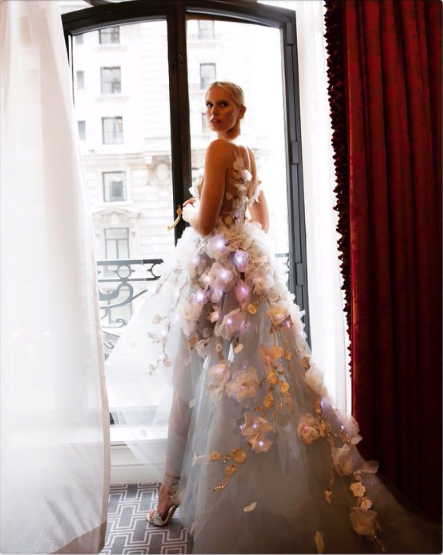 The red carpet at the Met Gala, a black-tie extravaganza that styles itself as “the party of the year” is a war zone where celebrities and bigwigs treat clothing as their primary weapons. At last night’s fund-raising event, supermodel Karolina Kurkova stole the show by wearing an IBM Watson designed interactive dress.

The IBM Watson “Cognitive Dress,” world’s first of its kind, worn by Kurkova at Met Gala 2016 is the product of a collaboration between IBM Watson and high-end fashion house Marchesa. The gown is covered in 150 LED-powered fabric flowers which are connected to Watson’s Tone Analyzer API. The analyzer reads through the tone of social chatter and interprets the emotional content of tweets tagged #MetGala and #CognitiveDress. As users on social media respond to the Met Gala, Marchesa, IBM, and the dress itself, the flowers will glow brightly. It picks a hue that corresponds to one of the five sentiments in real time from Twitter users’ reaction: joy, passion, excitement, encouragement, and curiosity.

THE MAKING OF THE IBM WATSON COGNITIVE DRESS

The process of formulating the design of the interactive dress began seven weeks before the Mat Gala. British design studio, Marchesa came up with a dress silhouette and what the emotions that final product should convey and sent it to IBM’s Watson division. The 150 photographs of Marchesa dresses and more than 100 red carpet photos were uploaded into the Watson Color Theory Tool, which then narrowed down on a color palette for the gown that would best reflect fans’ emotions during the event. Marchesa collaborated with developer partners like Inno360 and IBM Research-Almaden and analyzed thousands of fabric options before narrowing down on the right LED-amenable material – a lightweight tulle – for the gown. Watson lent its cognitive insight to find the best choices through the cognitive process.

Marchesa – IBM Watson Cognitive Dress is an incredible example of how humans and machines can work together to create something that would otherwise be impossible. In the past, illustrious names in the fashion industry like Iris Van Herpen have used technology both as a means of production and inspiration.

“It’s a partnership between man and machine,” said Jeffrey Arn, IBM Watson strategist. “What cognitive means for fashion, unlocking new considerations and sharing expertise, breaks us out of our bias. There are implications all across the industry.”

IBM Watson has worn several hats including and literally a toque when he took up a new hobby in 2015: cooking to suggest new recipes and food pairings.