Pixel Pat is not a prank from 1st of April, it’s Pat Gelsinger’s gift.

Intel appointed Pat Gelsinger as CEO last year, who is known for the Intel 80486 architecture. He was also named the youngest vice president in Intel’s history, back when he was just 32 years of age. He recently completed a successful year with the microchip maker, and Intel did something awesome to show appreciation for him.

On April 1st, Intel released an 8-bit style browser game to mark the first anniversary of Pat Gelsinger’s as the CEO. While it felt like an April Fool’s prank at first, it is so much more than that. The game features Intel CEO Pat Gelsinger as the main character. While playing the game, you can learn some interesting facts about the amazing life of the CEO while enjoying some retro fun. 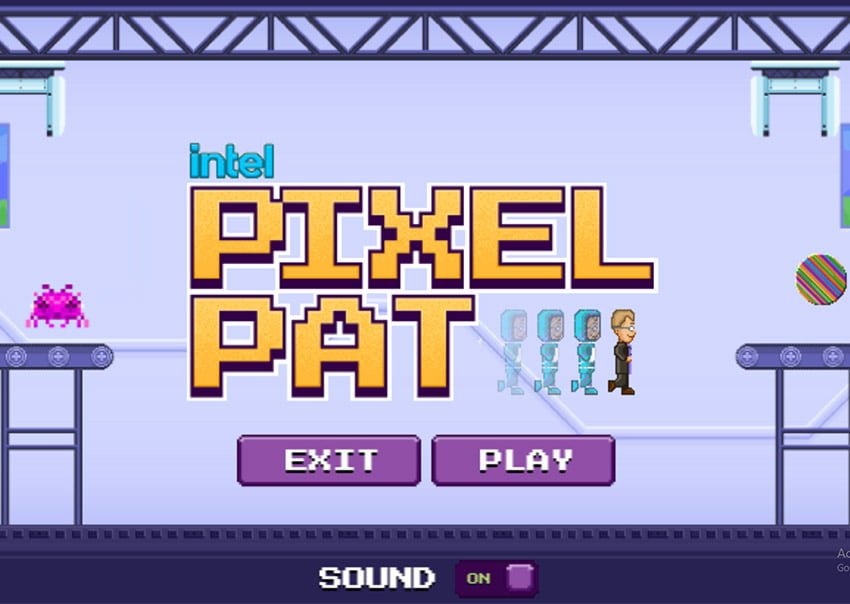 The game’s gameplay is as simple as possible: the user controls the character as he sprints through the level.

The game called Pixel Pat — a great name, by the way — is an endless runner compiled by the engineers at Intel. The game sees the eponymous Pixel Pat running through a new Intel fabrication plant. The goal is to collect as many wafers or coins as possible while running through the virtual facility. When you collect lightbulbs, you will receive a tit-bit about Intel CEO Pat Gelsinger and his history with Intel. Some of the lesser-known milestones he achieved while at the company have also found their way into the game, which is nice. For instance, the fact that he originally joined the team of i386 processors back in 1981 is also there in one of the bulbs!

You can also double jump on Pixel Pat, and once the player dies, all the collected coins, wafers, and bulbs are available to see. As the setting of the retro game is a fabrication plant, you should avoid any dust clouds or bugs, the mortal enemies of any fab-plant! A strategically placed bunny suit can give you invincibility for some time, like the star in classic Nintendo Mario. You can also claim extra lives once you collect, you guessed it, 86 hearts or wafers.

The gameplay is simple yet enjoyable. If you have played many 8-bit style games in the past, you will surely enjoy this cute little offering from Intel. 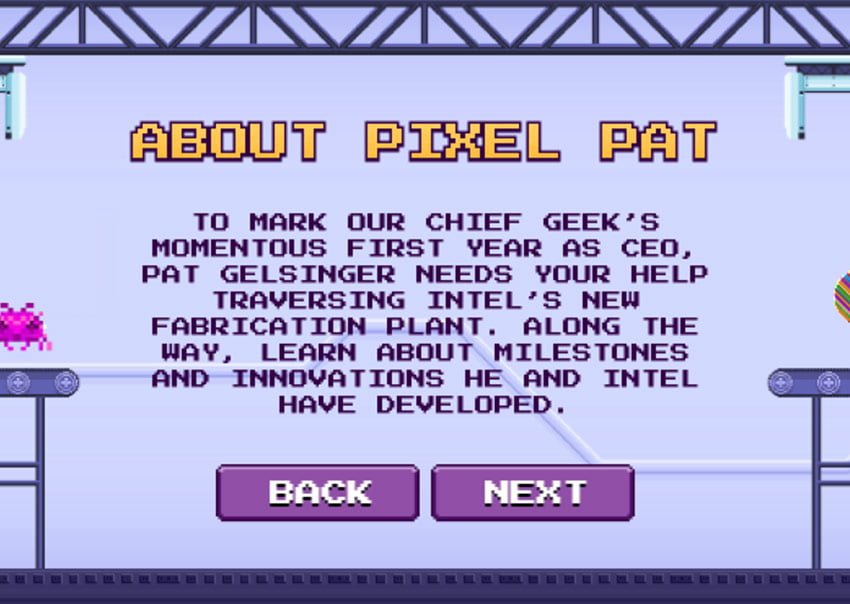 While the obvious purpose of the 8-bit style browser game Pixel Pat is to pay tribute to the exemplary work of Intel CEO Pat Gelsinger, the company might have other motives. In all probability, Intel considers the game a wholesome publicity campaign for its new CEO and Chipzilla. Companies always try to have unique and quirky promotional campaigns to stay relevant or bolster their public image. While many fail miserably, Intel has done a decent job here. While releasing the game on April 1st and the overall cheesiness of the campaign aside, the campaign works as it provides better engagement and insight to the face of the company, Pat Gelsinger.

Like many PR campaigns of the past, the Pixel Pat also couldn’t escape controversy. The campaign was launched just a day after it was revealed that Gelsinger earned $178.6 million as CEO of Intel, roughly 700% more than the previous CEO, Bob Swan. It is also worth noting that Gensinger’s salary is 217 times that of an average Intel employee.

Many analysts believe that making Gelsinger the lead character in a game that lauds the man’s achievements and shows his loyalty to the company over the years might help. The campaign might place the CEO in a positive light and make the boss more likable within and outside the company.

Although the Pixel Pat campaign is not that bad, given the boss’s timing and salary reveal, it might not be a great move by Intel. The campaign might be considered an empty effort by a company that cares more about pleasing the CEO than its average employee.