India is the next major technology market of the world, says a recent Internet trends Report published by the prestigious firm KPCB (Kleiner Perkins Caufield Byers). This latest report by KPCB’s Mary Meeker shows how India is progressing towards becoming the next big tech market of the world. The 355 page report has dedicated 55 pages for showing the state of mobile access and internet in India, reports The Next Web (TNW). 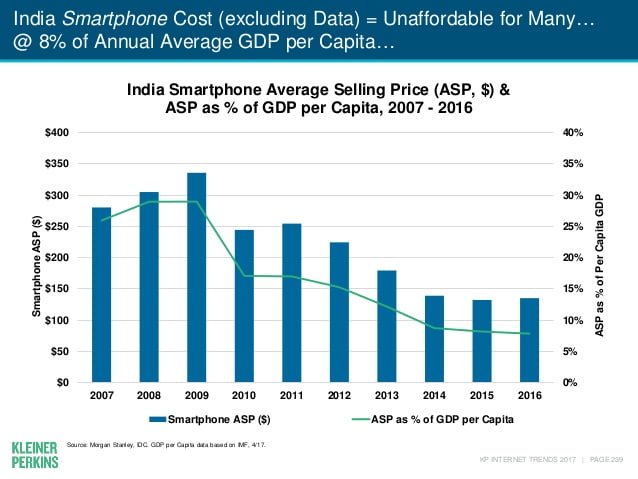 The KP Internet Trends 2017 report shows that India is not a country who will lag behind. The nation now has a whopping number of 355 million users; amounting to around 27 percent of the total population of India which is 1.3 billion. These 355 million users are up from 277 million users in 2015.

A decade ago the cost of a smartphone was not as affordable as it is now. The prices of mobile phones and mobile data have dropped down drastically making it affordable for many users. In 2007, it was around $270 which dropped down to below $150 in 2016.

Reliance’s Jio carrier was launched in September 2016. Giving credits to it, India is seeing major low-cost data plans on the 4G network. TNW mentions that the according to the KPCB Trends report, the usage of mobile internet is skyrocketing since 2014. The mobile data has seen a rise from merely 100GB per month to almost 1,200 million GB per month. Moreover, video and music streaming have also surged at threefold and fourfold levels between June 2016 and March 2017. 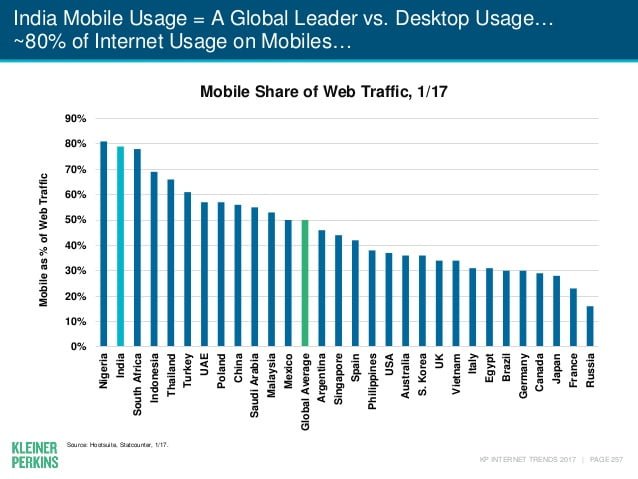 Notably, the Internet Trends Report mentions that almost 82 percent of the Indians have enrolled themselves in the ‘Aadhar Digital ID Program’. This has happened over a time span of the past 6 years.

However, India still has some tough challenges to overcome. The nation has a massive market for tech companies, but infrastructure and education still lack in the nation. Typically, reasons like high costs for registrations, and strict rules for starting a company have given a low global rank to India. Globally, India ranks at 130 out of the 190 countries in the area of the ease of doing business. 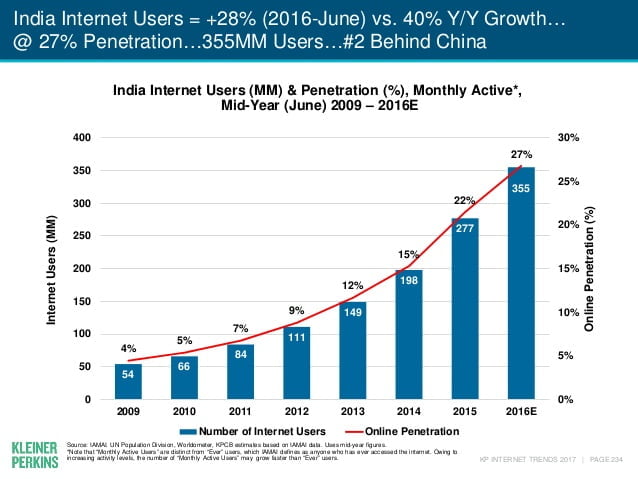 India seconds China for the number of mobile users; this is according to the time spent on the Android devices (around 150 billion hours). Out of the 10 highest popular apps in the nation, Facebook owns four in the list.

With 28 hours per week, the mobile usage exceeded the amount of time spent by people reading print media or watching TV. According to the Internet Trends Report, people spend 45 percent of their times on their smartphones for entertainment. While they spend 34 percent of the time for messaging and social media services.

Having said this, we cannot ignore that India is seeing a tremendous growth of the mobile and internet market. The Internet Trends Report shows that the country has a vast potential. Well, if India keeps progressing with positive developments it can certainly come out as the next major technology market of the world.

55% of internet users are denied access to some contents, says Mary Meeker