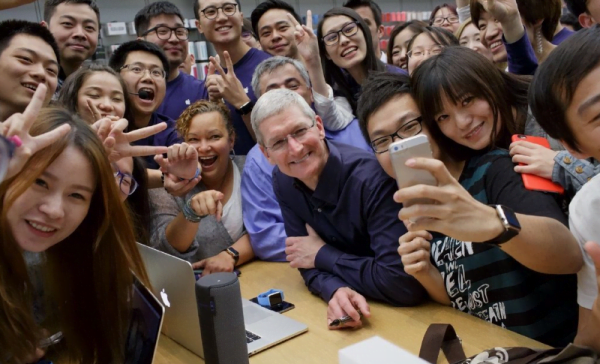 Didi Chuxing Investment and Development Center in India- Too Much Love to Share?

Just when you thought you’re done with reeling from the shock of Apple’s whopping $1 billion Didi Chuxing Investment during Tim Cook’s China visit, here comes more. Tim Cook is now in India and much to everyone’s surprise, he has announced Apple development center in India. The iOS app design and development accelerator in India will not only benefit Apple, but also Indians as it’ll open 4K job opportunities for developers in India.

India: A New Ray of Hope for Apple?

We’re all aware of the decline in iPhone sales economy, Android market share growth, and the downfall of Apple in China. Nonetheless, India presented Apple with an increased iPhone sales report, which is really very good. Also, we cannot dismiss the chaos that occurred due to the plan of selling used iPhones in India. Furthermore, adding much to the misery of Apple, the Indian government banned the idea of used iPhones in India.

Samsung products being the current market leaders have been crushing Apple products in India, as the South Korean giant has 26 percent market share in India’s smartphone economy. In fact, Tim Cook’s company fails to make it even to the top five. The company roughly sold 2M units in 2015, which amounts to merely 1% of total smartphone economy in India. This isn’t the end of misery for Apple as even after offering up to $500 discounts on iPhone 6 series, the giant had to struggle to receive traction against small manufacturers.

Also Read: Who is to be Blamed for Slow iPhone Sales?

In spite of these struggles, only India worked in favor of Apple during its quarter reports. India is one of the fastest growing economies in the world, so it’s obvious that it’ll attract the leading businesses from all over the world to invest. Apple is in a desperate need of growing economy, which is why the company needs flagship in India. It’s all about customer engagement. This is why following Didi Chuxing investment in China, Apple is investing in a local incubator, which is the key to market growth in a burgeoning economy like India.

Market Strategies of Apple in India: Apple’s Alternative to China?

Sure, India has the potentials to become Apple’s next China. But the strategy applied by Apple, which worked quite well in China may give a hard time while re-implementing in India. Apple CEO is trying harder to push Apple’s proposals in India to open its flagship stores and trade used iPhone models. What he really needs is to lure the Indian government, which Facebook somehow failed to do while promoting the ‘Free Basics’ in India. This is why Tim Cook has played the master stroke by setting a center in India’s IT hub – Bangalore to encourage iOS app developments that will power iOS devices like iPad and iPhone. The ambitions of Cook are very grand as he wants to become a bigger force in a country that is about to become the second-largest market for the smartphones in the world. There are possibilities for a major boost in Apple sales in India because similar to China; India is a developing and massive economy where fast growth could churn Apple products into attainable luxury commodities.

Also Read: Tim Cook will Visit India to Drive the ‘iPhone Business’ out of Crisis

Apple needs to focus on the mid-tier smartphone market with a lower price in developing countries like India in order to boost the sales. The iPhone SE is a good beginning, but Apple should come up with more aggressive rates for these fresh economies. It’s not clear if Apple will be willing to take this step as it is known for high-end products with sky-high prices. But without having low-range iPhone models, it will be very tough for the iOS giant to drag the unit sales of iPhones back into the territory.

However, the rate of growth in India will be slow as compared to major iOS economies like China and USA. The smartphone market in India is filled with extremely price conscious individuals. Probably 70 percent of smartphone sales in India are below $150. As a result, the sky-high price of iPhones has limited the iOS giant’s opportunity to maintain a growth in this market on a similar pace as that of the US and China.

The ecosystem of Apple is becoming robust than ever. This is the reason it’s realigning its plans in India. The company wants to target young audience via discounted price of previous flagships or by trading pre-owned, certified iPhone models in India.

So the announcement of Apple Development Center in India is a great move by Tim Cook, which can win favors of Indian Government who’re trying to take their campaign ‘Make in India’ at a global scale.

Market Strategies of Apple in China: Didi Chuxing Investment is a Gateway to Win Chinese Hearts?

Didi Chuxing investment may have arrived in an effort to win the hearts of consumers and government authorities of China. After suffering a major crisis in China, the American tech giant redoubled its efforts to win its prestige back in the Chinese markets. Never before has China mattered this much to Apple, thanks to recent downfall, which shook Apple to the core and made the giant realize how badly it needs innovation and fresh ventures. Now Apple is willing to throw huge bucks to prove its potentials. China, being the world’s largest population holds a major potential for iOS giant. After years of rapid growth, the market of smartphones has started to melt amid a downturn in the economy, but still the Chinese market is vast. The increasing pressure from China has made Apple rethink its market strategies. A nasty drop in the iPhone sales, forced shutdown of iTunes Movie and iBooks stores, and increasing count of security reviews has spelled a doom on Apple in China. Tim Cook can’t afford to have restrictions being laid upon on Apple products in one of the largest economies in the world. And this becomes a high matter of concern for Cook at a time when questions are being thrown about the growth prospects in future of the company.

So coming around with a fair plan, Cook has started throwing money on the issues to please government, investors, and locals of China. Digging down into its vast cash reserves, Apple offered a surprising $1 billion investment to Uber’s biggest rival in China – Didi Chuxing as a peace offering part. Tim Cook is referred as world’s greatest corporate leaders and he’s just proving the reference to be 100 percent true. In order to curry favor from pissed Chinese markets and Chinese authorities, Apple is taking a step in favor of localization instead of globalization in China.

Also Read: Tim Cook Visiting China May Solve Major Apple Crisis That It Has Landed In

Also, the latest strategy by Apple in China is an update for GarageBand, which is a music making application celebrating the essence of Chinese music. It includes language localization, Chinese musical loops, and traditional instruments. So in case, if cash fails to win over the government authorities in China, we’re very sure that Chinese instruments will.

Strategies like Didi investment and development center in India will mark as a huge comeback for Apple for sure. Or let’s hope it does.

What are your views regarding this? Let us know.