iPhone 12 Pro vs. Samsung Galaxy S20 Plus: Which phone should you buy?

The Samsung Galaxy S20 Plus is an upgraded version in the S20 series of 2020. The recently announced Apple iPhone 12 Pro is the second line-up of four iPhone 12 models by Apple.

The Samsung Galaxy S20 Plus is an upgraded version in the S20 series of 2020. The recently announced Apple iPhone 12 Pro is the second line-up of four iPhone 12 models by Apple.

The Galaxy S20 Plus has a glass back finesse with metal sides. It has a big 6.7-inch AMOLED display with a 3,200 x 1,440 resolution and a 120Hz refresh rate. A small punch hole located on the top has the front-facing camera. The phone also has an in-display fingerprint sensor and is available in four colors of Cosmic Black, Cosmic Gray, and Cloud Blue colors.

The iPhone 12 Pro comparatively has a smaller 6.1-inch display with 2,532 x 1,170  resolutions and a massive notch for the front-facing camera on the top. The phone has a new type of glass cover named the Ceramic Shield, made from a manufacturing process that uses nano-ceramic crystals inside the glass. The iPhone 12 Pro phone also has a stainless steel chassis and is available in four colors of Silver, Graphite, Gold, and Pacific Blue colors.

The Galaxy S20 Plus is powered by the Qualcomm Snapdragon 865 processor for the US and Samsung’s in-house Exynos 990 chipset for other parts of the world. However, the iPhone 12 Pro has Apple’s newest in-house processor, named the A14 Bionic chip that has a six-core CPU, a four-core GPU, and a neural engine chip with 16 cores for better machine learning performance.

In terms of connectivity, the iPhone 12 Pro offers low band and the 5G networks only in the US. The Galaxy S20 Plus, on its part, supports both sub-6Ghz and 5G networks across the globe and has the Snapdragon 865 chip. 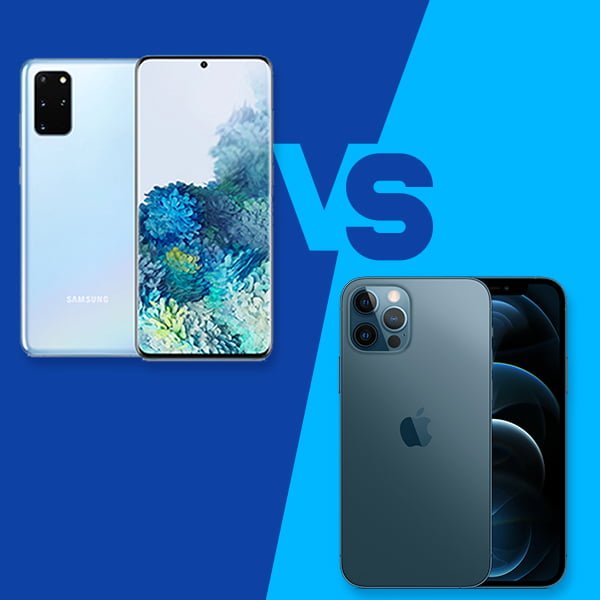 The iPhone 12 Pro has a 12MP wide sensor, a 12MP ultra-wide camera, and a 12MP telephoto rear camera with a LiDAR scanner located on the back. The phone also has a 12MP front-facing camera and supports recording video at 60fps with HDR and Dolby Vision HDR support. The Galaxy S20 Plus, on the other hand, has a primary 12MP camera located on the back, along with an ultra-wide 12MP sensor and a big 64MP sensor for its telephoto lens that supports optical zoom up to 3x.

The iPhone 12 Pro has the latest iOS 14 of Apple. It has new features like home screen widgets and an App Library to organize the apps. There is also picture-in-picture support for watching videos or making FaceTime calls while simultaneously using other applications. The Galaxy S20 Plus comes with Android 10 and Samsung’s in-house One UI skin. Samsung is also offering three years of Android OS updates with this phone.

The Galaxy S20 Plus is an efficient phone and worth the price tag. It seems significantly better than the iPhone 12 Pro because of its massive display with 120Hz support, reverse wireless charging and additional storage facility. The iPhone 12 Pro also lacks points for its colossal notch on top of the screen. However, in terms of pricing, the iPhone 12 Pro is lower than the Galaxy S20 Plus. It also has an OS that can be easily and quickly updated. The A14 Bionic chip on the iPhone is also a superb processor, and iPhone being an Apple variant, its camera hardware, and software are excellent. iPhones undoubtedly have one of the best smartphone cameras in the market.