Kik Opens Its Own Bot Shop for Third-Party Developers 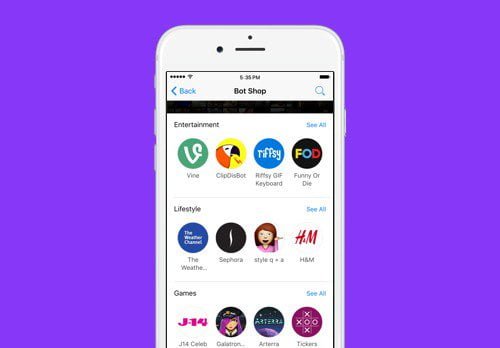 Chat network Kik announced on Tuesday that it has officially opened up a bot shop for third-party developers to be able to make and launch chat bots that can be used in the app.

The Waterloo, Ont.-based start-up with 275m registered users has currently launched16 different bots, including those from humour site Funny or Die, Riffsy, ClipDisBot, Sephora, Vine, Sequel Stories, Candles, J14, GalatronVS, Arterra, TicTacToeBot, MakeoverBot, HM, Secret Admirer, KikPoints and The Weather Channel. It has also teamed up with Imperson, Massively, and Sequel to allure developers to build on its platform.

The chat app users, which include around 40 per cent of all U.S. teens, spend an average of 35 minutes in the app per session, according to a survey conducted by consultants Magid. The companies are relying on bots to retain users in their apps, rather than downloading other apps or search in a browser to perform basic functions.

The multi-functional Bots will now allow users to shop, play games and will also answer questions and retrieve information such as current local weather conditions and forecasts. According to Mike Roberts, head of messaging and bot experience, the technology is in a great position to relay branded content to users. In the mobile realm, he says, messaging is the new browser and bots are the new website.

Bots popularity is on the rise also because they are easy to use. Users are not required to download a new app to use them, and they can work on any device with the app installed, regardless of operating system.

According to eMarketer estimate, nearly 1.4 billion people used the chat app in 2015 and are expected to grow 1.6 billion this year. Kik has entered into an already crowded bot arena, joining the likes of Skype, Facebook, Microsoft, and Slack. Robert believes the company can make a mark by creating a better user experience. He said that the industry at large wants to jump into the bot bandwagon but are not really sure how to build it further.

Bots are quite popular with developers too. Unlike apps they are easier to build. Apps need separate builds for iOS and Android platforms and bots do not require graphics or an interface, it’s just text and responses. And once the bots are developed, they can be easily delivered to any platform such as Facebook Messenger or Telegram within minutes.

Kik’s announcement comes a week before the social network Facebook is expected to launch a bot in its Facebook Messenger app, at its annual F8 developer conference in San Francisco.

Telegram Addresses the Rise of the Bots with Its Bot API 2.0