Since the introduction of phone cameras in the year 2000, the technology has only maintained a growing pace to dispute our need for a dedicated digital camera in keeping those special memories. It was like arriving at the technology’s climax when HTC released the first dual camera smartphone. But until today, we are still counting more and more additional lenses.

A recently leaked image, first released by Chinese outlet IT Home, suggests we would soon get a 5 camera Nokia phone as the first smartphone to feature a Penta-camera system.

From the image, we could see that the 5camera Nokia phone has seven round holes arranged in a circular design which hosts five lenses, an LED flash directly facing an IR focusing gear along the prominent Zeiss branding. But what are we doing with five lenses on a phone? 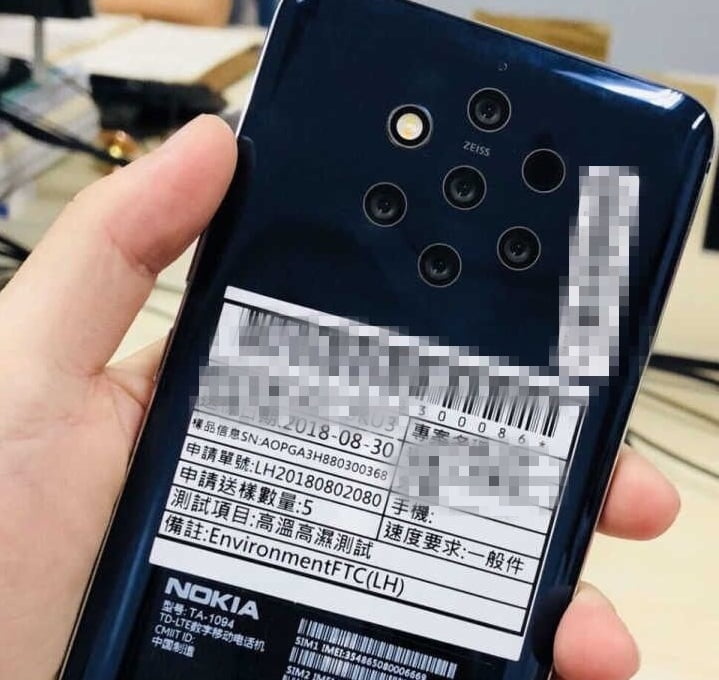 There are rumors that the 5-camera Nokia phone, known internally as TA-1094, could be the Nokia 9 flagship smartphone. Source: IT Home

Until the Nokia 5 camera phone is released, a clear explanation of how the lenses function would remain a mystery. TNW reports that these five lenses would handle varied image processing: black white, telephoto, multi-lens pixel synthesis, and color. Well, that’s not far from the truth if we can’t wait to satisfy our curiosity.

There are rumors that the 5-camera Nokia phone, known internally as TA-1094, could be the Nokia 9 flagship, though some market analysts are speculating that the Nokia 10 is the one coming with 5 cameras. There are chances that HMD would introduce this number of cameras now. The Finish mobile phone manufacturer HMD Global also acquired PureView technology deployed in the production of the Nokia Lumia 1020, 41-megapixel Nokia 808 and other high-end camera phones from Nokia, aside from holding the right to Nokia brand.

In an effort to reunite the Zeiss and Nokia brands for Android, HMD Global teamed up with Zeiss last year and the mobile manufacturer has started using Zeiss lenses for its latest smartphones. Lenses on the leaked image look more like Zeiss’s new miniaturized camera zoom system which the company recently patented. The Verge reports that a design sketch of the phone that matches the leaked photo was leaked earlier this year.

Despite how fast the phone camera technology is improving, it has failed to produce image quality slightly we can compare to digital single-lens reflex(DSLR) cameras. We may want to believe we’re getting closer but the mechanism and image processing algorithm looks like a task difficult to mimic using miniaturized lenses.

Huawei’s P20 Pro smartphone with three rear cameras made a famous headline earlier this year when it was released. The phone supports 5x hybrid zoom or 3x optical zoom. LG is considering delivering something similar in its next flagship, a 5-camera smartphone with different camera arrangement; three rear and two front cameras. In July, camera-maker Light announced its planning to introduce a phone with 9 cameras using the technology in its 16-lens camera.

Five camera looks like flooding our phones with too many sensors. But until a more powerful lens that can handle what many could deliver when configured with the appropriate software, we can only rely on multiple lenses to produce better images on our smartphone. Five camera lenses would certainly deliver additional zoom capability and new functions.

There are no events lined up for HMD to speculate when the Nokia phone with 5 cameras would be unveiled. Hopefully, we’ll have the phone in a few months from now.