Lenovo Z5 is the First ‘All Screen’ Phone

Lenovo VP, Chang Cheng teases a new phone that seems to be the first “all screen phone” on Weibo, China’s social network. The luxury-looking phone’s screen is framed by the ultra-thin bezel and having much comparison with Apple’s iPhone X which has gradually grown infamous. The Lenovo Z5 seems to match the hype looking extremely beautiful on the teaser sketch revealed.

With many smartphone manufacturers working hard to maximize screen size by minimizing top and bottom bezels and including notches, Lenovo is fully ditching bezels and notch to offer the Lenovo Z5 as the first “all screen” smartphone offering full-screen size.

However, it is still unclear if Lenovo Z5 is only a concept or being produced by the company. Cheng’s teaser post announcing the new phone on social media referred the phone as Lenovo’s new flagship but the post is a bit confusing by showing half of the phone with no further details on production. The Lenovo Z5 looks more like a phone from the future on the sketch. 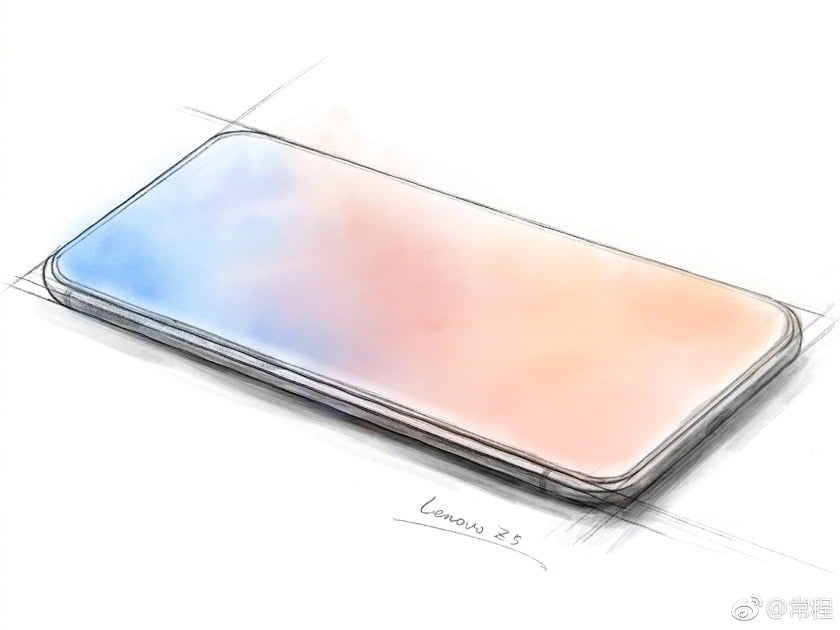 Information that can be deduced from the sketch suggests that the Lenovo Z5 would be feature screen-to-body-radio of 95%, no notch, and no bezel. Additional information says that the flagship will include four technological breakthroughs and packs 18 patented technologies. It is not clear how Lenovo plans to integrate the front-facing camera.

If we choose to ignore the notch on iPhone X, Apple would be the first to develop a smartphone that’s entirely a screen. Apple was able to solve the problem by folding the OLED screen around the phone’s back. This did not get rid of the notch for the front-facing camera. The Viva Apex, which has 91.3% screen-to-body-ratio, a bottom bezel and pop-up front-facing camera and an on-screen fingerprint scanner, is another device with much resemblance with Z5, and as well as the Xiaomi Mi Mix that features a chin at the bottom where the camera is fixed unveiled in 2016.

Lenovo has failed to live up to its expectation after acquiring Motorola Mobility from Google for $2.91 billion. The smartphone market had expected the company to pull a strong share but the company has been beaten by both local and international rivals. Lenovo is desperate to grab a share by stealing the world’s attention. Can the company leave up to that now that smartphone market is shrinking?

Upcoming smartphones from Lenovo this year currently include the Zuk Edge II, K series and two from the S series.

Lenovo Z5 release date was not announced by Cheng, but some market experts believe the flagship would be available for sale in August 2018.