PC’s have more or less become defunct. Last year, it projected a 5 percent drop, which is way worse than the 3.4 percent forecast. It’s not just it. The PC industry is losing a great deal of money. For companies heavily invested in the PC industry, in order to make substantial revenue, they’ll need more than just feeling innovation. Enter, Lenovo’s compact virtual reality gaming PCs.

Lenovo has announced two new Windows 10 gaming PCs at the Gamescon 2016 in Germany. The IdeaCentre Y710 Cube and the all-in-one IdeaCentre AIO Y910, both are aimed at 4K gaming lovers. Both the gaming PCS will follow the already established aesthetic – red and black coloring. The body will also include industrial features such as faux carbon fiber, and an excess of angular lines and grills. Both the models come with swappable parts, due to the detachable back panel. 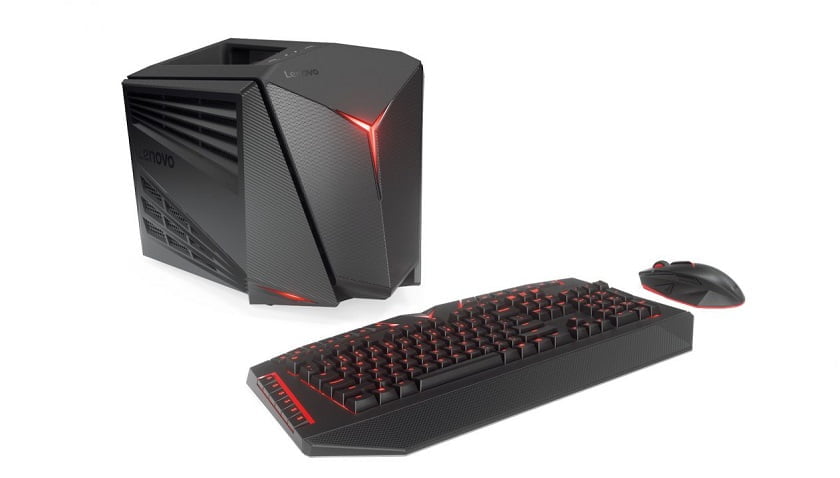 Lenovo says the new VR-ready gaming PC will handle VR and high-quality streaming, and will let players get a taste of 4K gaming. Connections include HDMI and VGA, but there is only one piece. Meanwhile, it has got only four USB ports – one 3.0 and one 2.0 port on the back, and two 3.0 ports on the front. So, it’s not enough ports if you want to connect your mouse along with a headset, and a few gaming keyboards. It comes with a built-in handle, as well as an optional Xbox One wireless controller for better connectivity.

The IdeaCentre AIO910’s top features include NVIDIA GeForce GTX 1080, 32GB of RAM, 2TB/256GB of storage, and Intel Core i7 processor. The features are decked inside a 27-inch display alongside Quad HD 2560 x 1440 resolution. It starts at $1,799 and will be available in October along with the IdeaCentre Y710 Cube.