Let’s end the foolish debate of Laptop vs. Desktop

Let’s settle the long-running, never-ending debate of laptop vs. desktop.

If you are asking the question: should I get a laptop or desktop? This article is for you!. We will go over some of the features of these machines and what to consider when you are on the hunt for a computer.

Now back to the original debate – laptop vs. desktop. If you are a casual user who does not need anything powerful, it probably makes no difference whether you get a laptop or a desktop. A good and cheap option would be to get a Chromebook. On the other hand, you’d definitely choose a desktop over a laptop if you need something for 3D rendering, music production, and video editing.

Another new category was developed by Microsoft, known as Surface Studio PCs (a PC that allows you to adjust its screen to an optimal level for drawing). Designers and creators will undoubtedly find these machines very useful. 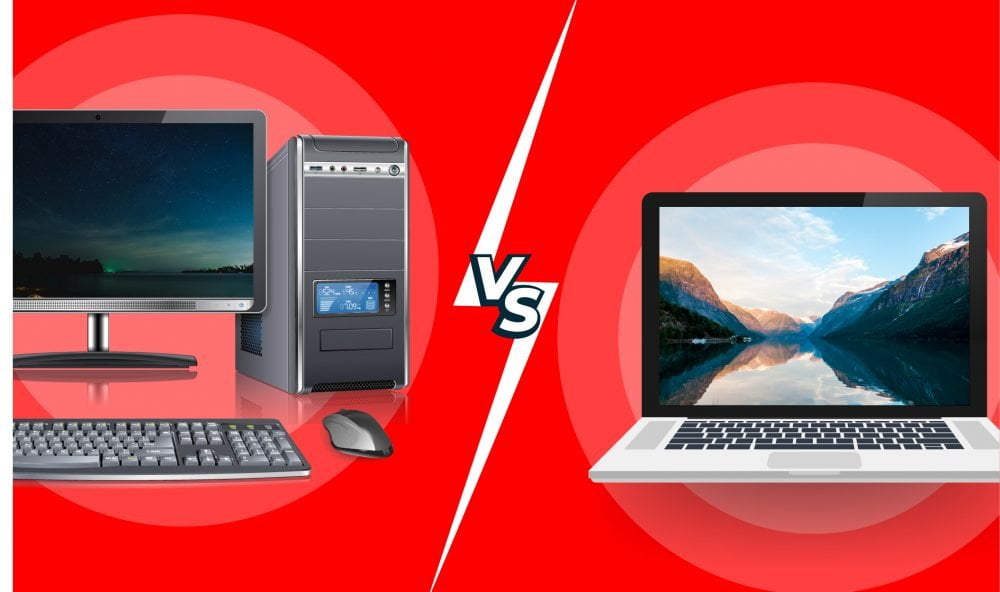 There is no wrong choice as long as a laptop/desktop fits your needs and preferences.

Portability is one crucial advantage of laptops over desktops. However, they have limitations too. For example, they burn out their batteries fast because of the power-hungry components inside them. Their processors are also not as powerful as desktops. However, you can upgrade your laptop’s RAM if it is not enough. On the other hand, desktops are bulkier and bigger than laptops, requiring more space to set up and maintain. In essence, you cannot carry them around easily as you would a laptop.

Those who want portability without sacrificing much performance should go with laptops. But if your work or hobby requires you to have a high-performance PC, then go with desktops.

With this in mind, some offices may find it beneficial to use traditional desktop computers, while others may opt for laptops or hybrids (which act like both). However, these days many workers take their laptops wherever they go, so even if the office uses desktops, employees could still opt to bring their own laptops anyway! Thus, both computers become a matter of personal choice instead of what works best for the business.

Price is one of the benefits of a desktop computer over its portable counterpart. Desktop computers are usually cheaper, especially for those with limited budgets. However, some people prefer having a portable computer as they will be using it in different places.

Additionally, a budget friendly desktop can offer more features for the price you pay, compared to laptops with similar prices. This is especially true for desktop computers meant for gaming/graphics design/video editing. As a result, they usually cost more than entry-level laptops but contain better hardware.

In terms of speed, desktops are generally faster than laptops, even on the same high-end versions. This is because they don’t have to power such a high-res display to dedicate more energy to other functions. On the other hand, laptops are constantly shifting their focus between speed and battery life as these two features tend to be mutually exclusive (you can’t get the top-end speed and long-lasting battery at the same time). Also, you’ll need one or the other depending on the tasks you have at hand.

Instead, most users go for high-end versions, typically speedy but have relatively average battery life. Laptops in general also tend to get hot when used for long periods, so it’s important to let them cool down during breaks; otherwise, you may risk overheating them or even burning your lap!

Laptop vs Desktop: Our Verdict

The debate: which is better, laptop or desktop, will go on for years. However, one should look at their needs before they end up buying a laptop or desktop. The former has limitations but so do desktops. There is no wrong choice as long as it fits your needs and preference.

If you need something powerful, then go with a desktop. For casual users who don’t need anything powerful, get Chromebooks or cheap PCs. And finally, Surface Studio is great for designers who want portability without sacrificing much performance.

Laptop vs Desktop PC: Which Should You Choose?