Multinational electronics company LG recently announced a portable air purifier that one can wear on the face like a mask. The PuriCare Wearable Air Purifier mask, as it is called, uses a pair of replaceable H13 HEPA filters that are similar to the filters one will find in LG’s range of air purifiers for home. The mask and filters are paired with battery-powered fans with three-speed levels that help the wearer to breathe. According to LG, the device has suitable sensors that detect when the person is breathing in or out and adjusts the fans’ speeds according to the wearer’s convenience. The fans hasten the speed automatically to assist the wearer in inhaling air and slow down to reduce the exhale resistance.

To limit any air leakage near the nose and chin, the LG PuriCare Wearable Air Purifier uses its ergonomic design. It is touted to blend into the facial shape of a person. This design is researched internally by the company. The LG PuriCare Wearable Air Purifier comes packed in a case equipped with ultraviolet (UV) LED lights that can charge the mask. The mask can also send a notification to the users through the LG ThinQ mobile app when the filters require an immediate replacement. The face mask also has replaceable ear straps and is a recyclable product. 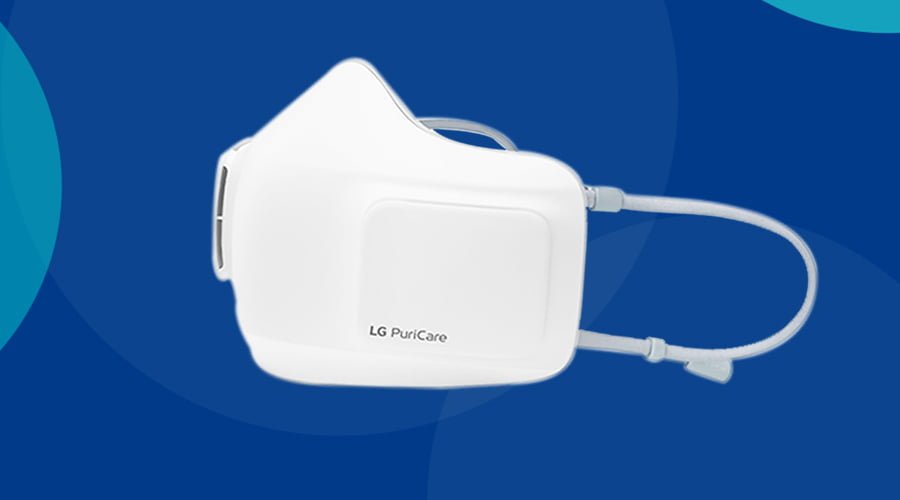 Though the recent announcement ahead of IFA 2020 doesn’t mention anything about the COVID-19 pandemic, it directly implies that the mask was made and developed to respond to the virus situation. According to LG, the wearable air purifier is specifically designed to replace the “inconsistent” homemade masks and the disposable masks that are shortage in supply and are worn by some people.

Earlier in July, when LG initially announced the mask and also stated that the company would donate 2,000 of the devices to a university hospital in Seoul, an executive from LG company stated that they hoped it would help all medical staff “amid the serious COVID-19 pandemic”. They also hoped that it would make it easier for the medical staff to wear a mask for long hours at work.

However, the press release by LG doesn’t make any such claims about the mask slowing or controlling the spread of the deadly coronavirus, or whether it filters air effectively as a person exhales and inhales. LG stated that it was waiting until the certification and testing process is done to give any details about the same. However, it is an important distinction, as masks are a necessity at this time and are effective in preventing the wearer from infecting those around them and helps to stop the wearer from being infected by the virus.

The USA’s Centers for Disease Control and Prevention currently recommends against the use of any masks with exhalation valves or vents to prevent the spread of the COVID-19 virus, as these aren’t effective in filtering “expelled respiratory droplets” that allow wearers to infect the people nearby. As LG’s new mask has motorized fans, it needs to be powered regularly for proper and continuous functioning. According to LG, the PuriCare Wearable Air Purifier comes with an 820mAh battery that provides up to eight hours charge of use in its low-power mode work, dropping to only two hours in the high-power mode.

LG’s announcement doesn’t exactly say when the mask will be launched or the price of it, but it said that the mask would be available for people in the fourth quarter of this year across “selected markets.” The LG PuriCare Wearable Air Purifier will be showcased at the IFA 2020 in September.