LG Electronics just unwrapped its much awaited 5-camera phone, V40 ThinQ. The five camera smartphone is available for pre-order now. Its shipping begins between October 12th and October 18th across the USA.

“The LG V40 ThinQ was designed with the main goal to deliver an uncompromised experience for users to create, consume and share high-quality content,” mentioned Hwang Jeong-hwan, President of LG Electronics Mobile Communications Company in a statement.

“The versatility of the camera and the proven V series platform makes the LG V40 ThinQ a serious option for customers looking for a premium smartphone that does it all.”

LG V40 ThinQ boards new three-lens setup on the rear side and two lenses in the front camera module, each performing a separate task.

All about three rear cameras on LG V40 ThinQ

The three lenses on LG’s latest flagship smartphone attribute a bunch of versatility as follow:

Further, one can choose between the preferred modes of shot using Triple Preview and seize the moment in these three different angles in one click using the function Triple Shot, and then create a short video.

All about front cameras on LG V40 ThinQ

There is one8 MP standard camera with f/1.9 aperture and 1.12-micron pixels which offers premium “Bokeh effect” for portraits. The second 5 MP wide-angle lens on the front side secures an aperture of f/2.2 and pixel size of 1.12 microns.

LG 5-camera phone is integrated with artificial intelligence tech such as AI Cam that recommends appropriate angles and filters to capture a classic shot, and AI Composition automatically fine-tunes the position of subjects in a scene for generating a perfectly balanced picture. There is also AI Shutter, AI Auto White Balance and Google Lens. 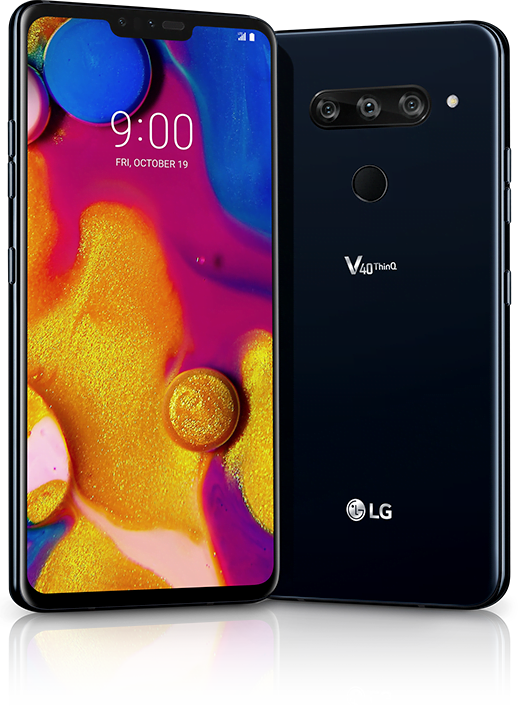 While LG V40 ThinQ definitely wanted to lure the audience with its next-generation camera capacities, it houses more such excellent features.

LG V40 ThinQ is powered by Qualcomm Snapdragon 845 Mobile Platform and runs on Android 8.1 Oreo OS. The company claims that the 3,300 mAh battery on the phone provides a full-day usage, while glass-back supports fast wireless charging via Quick Charge3.0 Technology.

There is a Boombox Speaker configured on the new LG phone for high-end sound quality whereas it is the first LG phone to bear the Audio Tuned by Meridiantag.