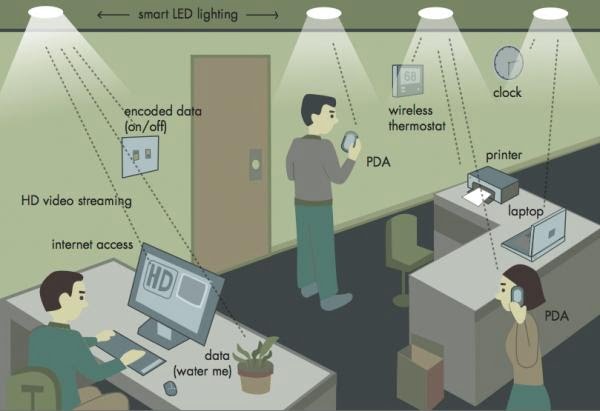 Researchers have been working on different ways to enhance the wireless data transfers. One of the new technologies that have been in the works for years is known as Li-Fi wireless technology, which is faster, low cost, and environment-friendly. It is capable of transferring high-speed data through visible light communication.

The technology has been tested in the real world setting and is actually 100 times faster than Wi-Fi. According to reports, it won’t be very long until the Li-Fi wireless technology is used in place of, or alongside the traditional Wi-Fi.

The Li-Fi wireless technology uses visible light communication (VLC) from 400 to 800 terahertz to transmit data at high speeds. Scientists were able to achieve maximum speeds of 224 gigabits per hour or equivalent to 18 movies downloaded per second during their lab tests. It can potentially change the present internet access we have.

Currently, Wi-Fi is the most commonly used transmission medium of the internet in both public and private homes and institutions. But Li-Fi takes it to another level altogether. The team of scientists conducted a pilot test the Li-Fi wireless technology in offices and industrial environments in Tallinn, Estonia. Their maximum speed transmission was 1GB per second.

Li-Fi was invented in 2011 by Harald Haas from the University of Edinburgh in Scotland. Haas demonstrated, for the first time, that flickering light from a single LED transmits more data than cellular towers.

It works like a very advanced version of Morse Code of flickering light that is received as binary codes, after which the computer converts it into readable data. The flickers are undetectable to the human eye.

The primary benefit is the low cost. All the technology requires to use is a specially designed LED light for data transmission. It can offer both light and data transmission, cutting down wiring costs and other connection equipment.

The second benefit is, of course, the faster data transmission. With that level of speed, we can also turn the tide for data transmission which needs accuracy and real-time speed, like medical applications and healthcare technologies.

It is also more secure since light cannot pass through walls; hence data interception is not possible in closed rooms. Besides, it is also environment-friendly because it only requires minimal hardware, and light transmission is much safer than radio signals.

Replacing Wi-Fi technologies with Li-Fi will not be feasible due to expense. The aim is to combine the existing Wi-Fi with Li-FI technology to maximize potentials in the field of data transmission. It will possibly open doors to a faster, yet cost-effective future of internet access for everyone.