If you don't have these life-changing apps on your phone, you're seriously missing a trick... 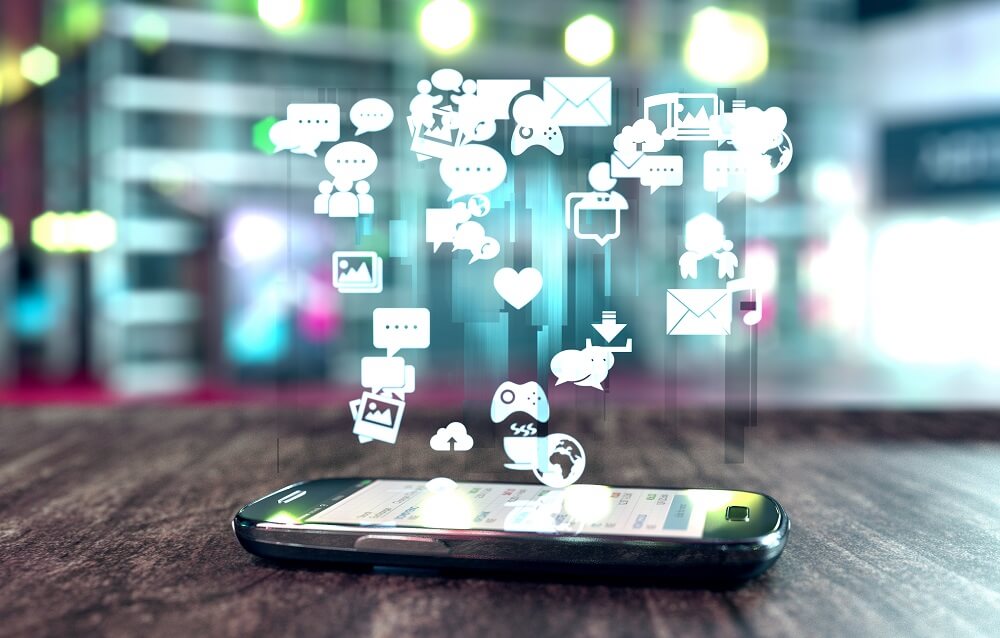 You’re probably wrong if you don’t think there isn’t much your phone can do for you. The handset, sitting there silently in your bag, is your watch, your alarm, your notepad, your TV, and not to mention your phone!

But with the Apple App Store and Google Play Stores brimming with millions of apps each year, it’s no surprise that a couple of installs could make your life easier. We’ve sourced some of the best apps these stores have to offer and come up with a list of the most life-changing apps that no Technowize reader should go without… 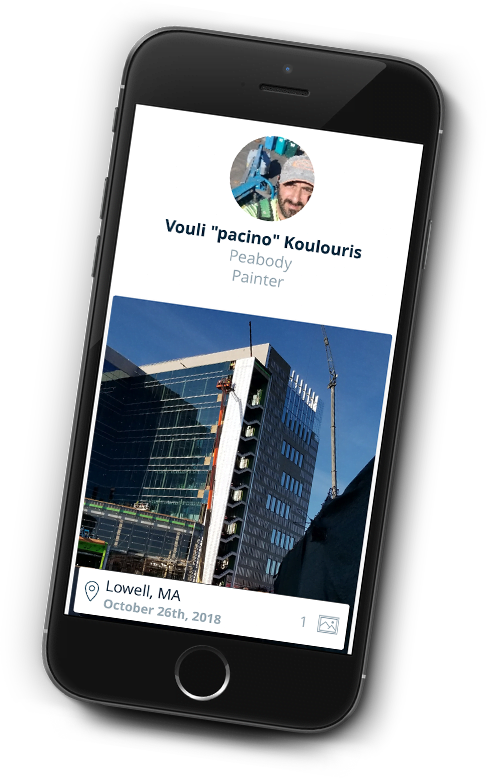 The idea for creating an app that connects blue-collar construction and trade workers occurred to David Broomhead, CEO and Founder of Trade Hounds, while he was earning his MBA at Babson.

Without any notice or media coverage, Trade Hounds mobile app quickly gained over 90,000 workers across the U.S. create their profile on Trade Hounds, which is available in the Apple and Google Play Stores.

Trade Hounds app is a cross between LinkedIn and Instagram. It allows construction workers, electricians, carpenters, plumbers, etc. to connect with each other to share their job experiences, discuss potential job prospects, their work-life, and share on the job photographs.

“The Trade Hounds mission is to improve the lives of the workers who are building the world around us by giving them access to their most valuable resource out there: each other,” says Peter Maglathlin, Co-Founder & CFO at Trade Hounds. 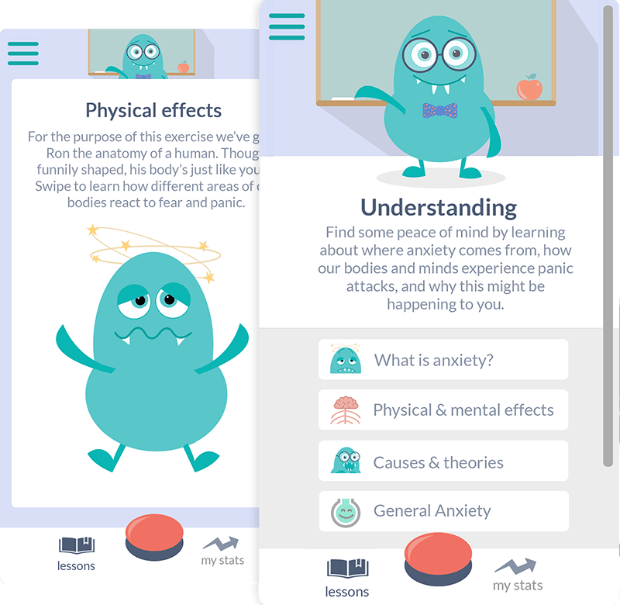 According to the World Health Organization (WHO), 1 in 13 globally suffers from anxiety. The sad part is, only about one-third of those suffering from anxiety disorders receive treatment seek help.

Rootd, a female-founded, self-funded app helps people manage panic attacks and anxiety. Since being created, Rootd has gained over 100,000 users in over 100 countries through the Apple App Store and Google Play.

In addition to mindfulness exercise and step-by-step guides to calming techniques such as deep breathing, the app features a panic button that makes it simple to call a loved one or hotline to guide you through the panic attack.

All of the app’s essential elements, including the Rootr emergency button and the personal stats page, which shows users the number of panic attacks they’ve overcome – are all free. Rootd Founder and CEO Ania Wysocka wants to make sure help is available to anyone who can’t seek assistance due to financial constraints. 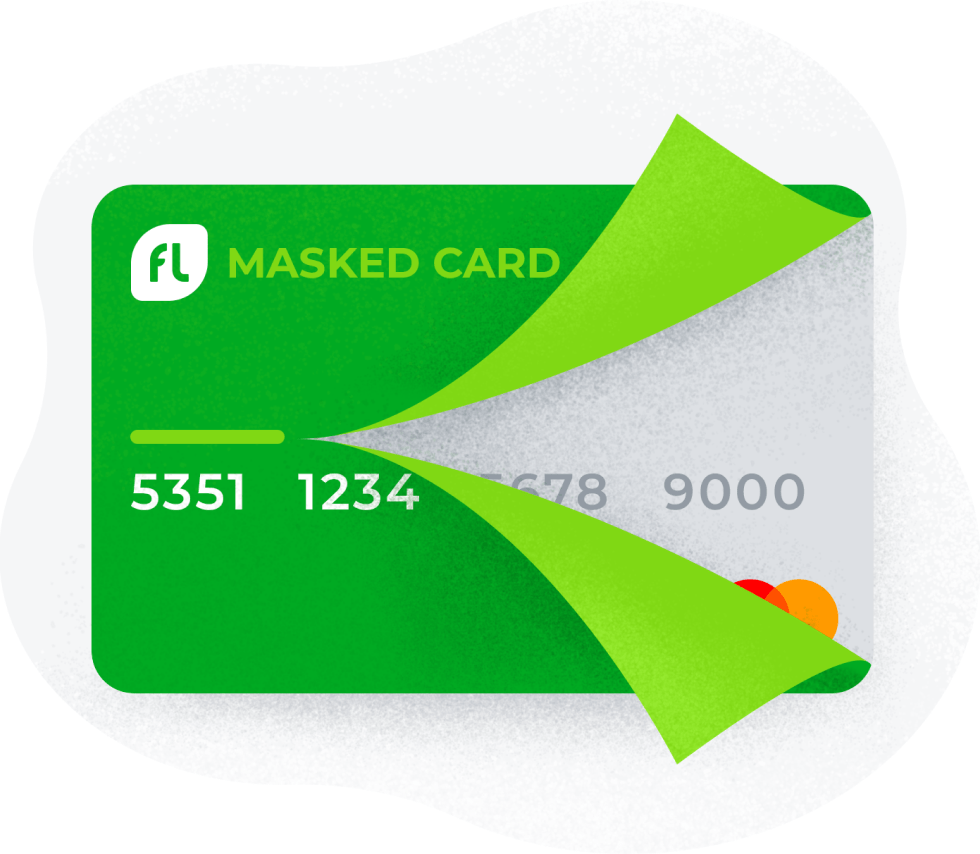 Do we have enough privacy to mask our online persona? Sadly, no. But now you can have it with FigLeaf, a first of its kind, all-in-one privacy app.

FigLeaf scours the internet and lets you know if any of your personal info has been leaked. The app allows you to choose which websites or companies can have access to your privacy info by simply flipping a toggle. It also provides you complete privacy and a regular online presence by removing all the site trackers that follow you when your browser a website. And there’s more.

FigLeaf empowers you with the ability to:

The app is available for free on the Apple and Google Play Store. 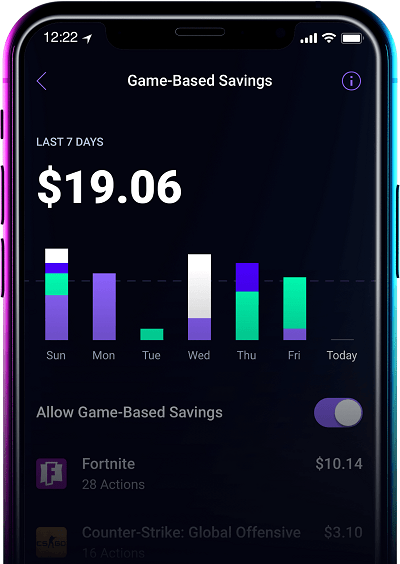 Believe it or not, Blast is a free-to-download gaming-based savings app that allows you to save, earn and win money while playing games online. Gamers can check into their Blast account to set up payments and other options. As of 2019, the savings account on Blast app offers a 2% APY. All of Blast accounts are FDIC-insured so you don’t have to worry about your account getting locked with any money inside.

The company based in California is run by a diverse team of gamers, musicians, designers, financial professionals, and technologies. It was founded in 2018 and has since gained over thousands of downloads.

Blast users can also make money and gain rank on the leaderboard by completing various missions, which is automatically deposited into the Blast high-yield savings account. The app supports nearly every game listed on the Apple App Store and Google Play Store and plans to support other PC and console titles.

According to the Blast website, “for example, earn 25¢ for connecting candy, make 50¢ for collecting coins, or get $1 for conquering that pesky level 7.” 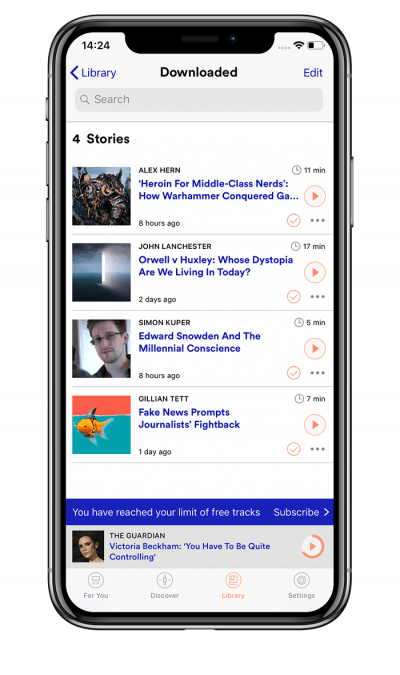 Curio offers intelligent audio that informs, educates and entertains. With the Curio iOS app, you can listen to the world’s most respected and trusted journalism anytime, anywhere.

Headquartered in London, every day the Curio team curates ideas shaping the world from partner publications including The Guardian, Financial Times, Bloomberg, Fast Company, The Business of Fashion, Aeon, The Economist, The Washington Post, and many more. Carefully curated by editors, the stories are narrated by world-class professional voice actors, bringing high-quality content to life.

Cost: Curio offers 10 free tracks, a monthly package of £5.99/month or a yearly one of £44.99/year. Paid subscription packages include:


Tunity allows you to listen in on any nearby TV through your smartphone. It works by streaming TV audio from broadcast into your phone. All you need to do is use the app and point the phone’s camera at the TV you want to hear.

Once Tunity figures what channel the TV is one, it relays the audio and plays that into your smartphone. The process can be delayed by 10 to 20 seconds before you can hear accurately on the app without any lags.

Tunity is an intuitive and easy to use application. It’s an app that allows you to spend time with your friends in a noisy bar and also keep an eye on the latest football updates. 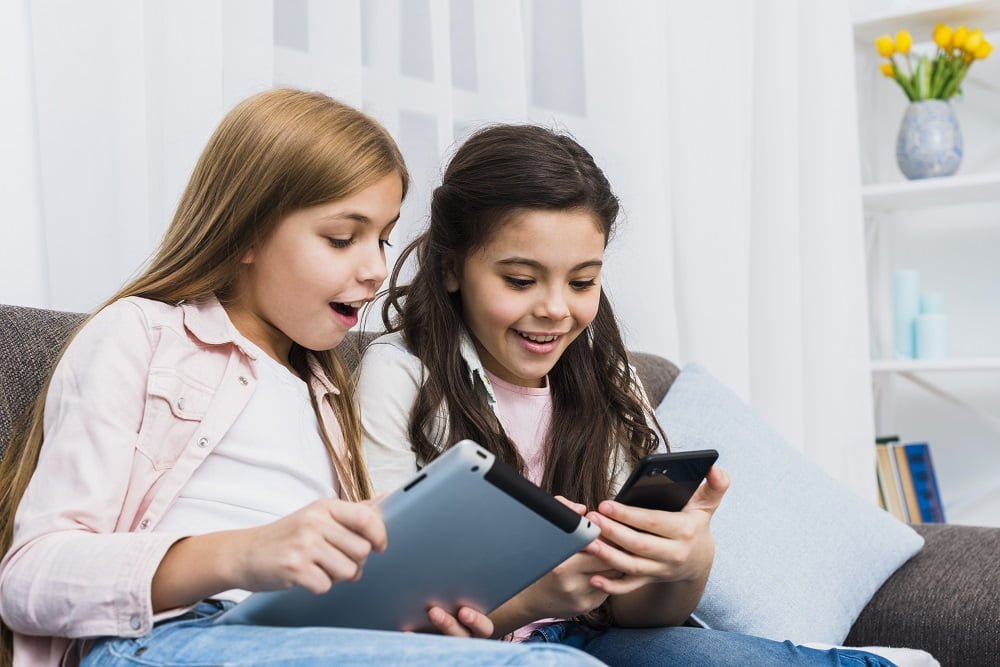 Little Red Coding Club is a free educational app that teaches children how to code whilst immersing them in the AR fantasy world of Little Red Riding Hood. It’s the first multiplayer AR education app in the world whilst also implementing the latest AR technologies including Apple’s People Occlusion feature that was introduced with iOS 13. The result is an incredibly interactive and fluid experience that draws children in and engages them with a crucial 21st Century skill. It has already been hugely popular with teachers and parents around the world who are all very keen to help develop their children’s computing skills ready for today’s digital work environment. 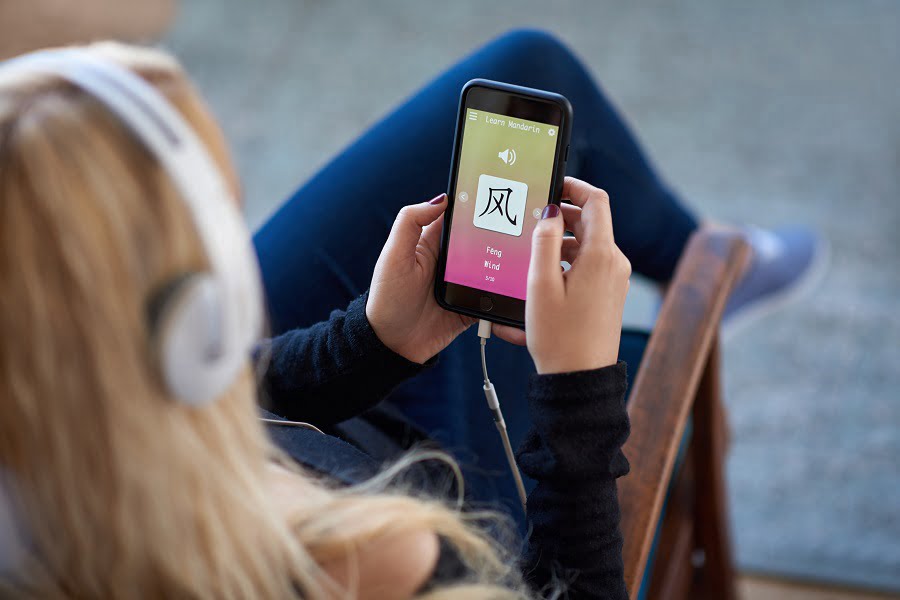 Drops is changing the way people all over the world learn a language. Through quick, effective, and fun word games Drops is teaching the essentials of language – vocabulary – to make language learning a consistent, daily habit. While many other language apps set false expectations of 100%
self-directed fluency, Drops focuses on building a solid foundation for language learning. That foundation is what Drops calls the 3 Cs: the Core vocabulary taught by the Drops app, the Confidence built via increased comprehension resulting from increased vocabulary breadth, and the Consistency built via daily use of the Drops apps.

Founded in 2015 by language and learning enthusiasts Daniel Farkas and Mark Szulyovszky, Drops uses proven learning methodologies including mnemonic association, gamification, and spaced repetition, to make learning accessible and effective to a broad range of language learners with
different goals across the globe. As native Hungarians, Daniel and Mark needed to learn English to participate in the global economy, and strongly believe multilinguality helps bridge cultural, political and philosophical differences.

Drops spans across mobile apps Drops and character-based writing app, Scripts, a web-based visual dictionary, and a soon-to-be available web offering that will allow users to access the functionality of the primary Drops and Scripts apps from the web. They are an early adopter of unified iOS/Android development program, React Native, which allows them to efficiently add new languages at a quick speed of development and scale, averaging 7 new languages per year.

This has led Drops to offer a total of 36 languages, making it the leading app in terms of the number of languages offered. Drops was named Google’s Best App of 2018, and in 2019 has been shortlisted for TIME’s Best Inventions list. 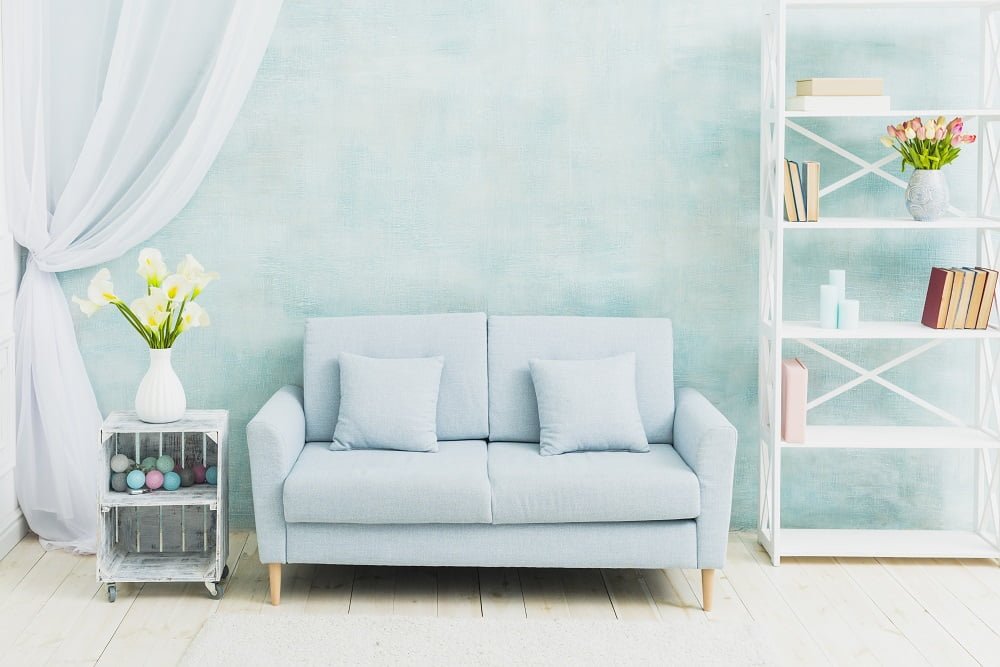 PhotoPerfectApp is the ideal way of taking “blended images” on your iPhone. Indoor light and dark exposures or outside sunlight that is too strong, are very difficult for any camera to compensate for. The app makes the end result look as though you had several “flash stands” syncing with the camera, to give the even lighting effect. Outside exposures with the PhotoPerfectApp are truly remarkable. Your subject can be in dark shadows and have a brightly lit background both will be ideally exposed with the best exposure for each.

Photo Perfect has also integrated its exclusive PhotoShow for two different and distinct purposes. The first is for anyone who is traveling and wants to take a variety of images and have them “placed together” to create a video Photo-Show with music. Each image has a 4 second viewing time. The music is chosen by the user, with 14 different selections.

Each song is 2 minutes in length so you can add up to 18 images into each Photo-Show. The Photo Show Video is created inside the app and the user can review and send to family and friends. There is also a mass texting component. Users can send a text to 5 agents or 500 recipients on a single click. This innovation provides for fast texting of videos and photos. This has never been done before and is hosted on a private server.

3 Apps to Bring an End to Your Smartphone Addiction