In the 1970s, NASA Ames Research Center (ARC) conducted space colony summer studies on Bernal Spheres and Toroidal Colonies which could hold a population of up to 10,000 living in space, and on Cylindrical Colonies which could hold a population of 1,000,000. This, of course, blossomed from the fertile imagination of Apollo-era scientists, who dreamed of propelling humanity spaceward. Between the late 70s and 90s, the romance with a great rotating wheel in space, with skylight windows, vegetation, rivers and dwellings died. And so did those space colony dreams until we had the resources we needed to deploy humans on Mars, which may have once hosted life. With the dangers of overpopulation, resource scarcity and climate change looming, space settlement sounds less like science fiction every day and more like an imminent reality. 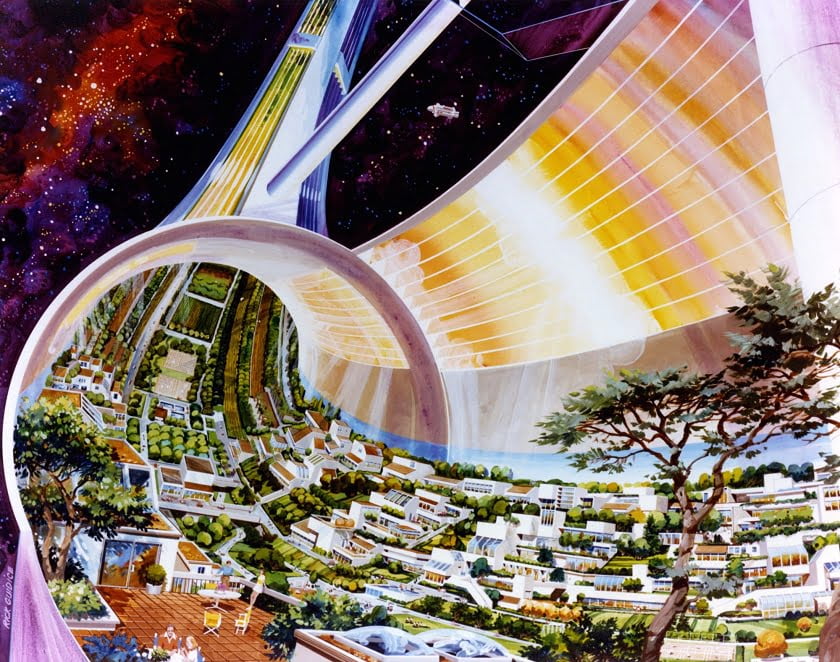 (IMAGE: Artistic renderings of Bernal Spheres and Toroidal Colonies by Rick Guidice, a freelance illustrator, to bring the otherworldly scenes to life.)

Come 2016, and the space is open for businesses. We have very less technical hurdles along the path to reach our dream. With several democratizing and space commercialization talks held over the past years by the Federal Aviation Administration, we know that it’s not just about licensing lunar rights. With the permission of the FAA, space is getting some new real estate. And perhaps lots and lots of exposure.

This spring, NASA tested a new type of space habitat that could one-day house astronauts and space explorers. The Bigelow Expandable Activity Module, or BEAM, is a 10.5-by-13-foot space efficient plug-in play inflatable module. It is specifically designed for future deep-space missions. The space habitat is designed to withstand solar and cosmic radiation. This also includes atomic oxygen, UV radiation, space debris and all other destructive factors that come into play in space. By 2025, Bigelow plans to begin a $12 billion project to set up bases on the lunar surface. 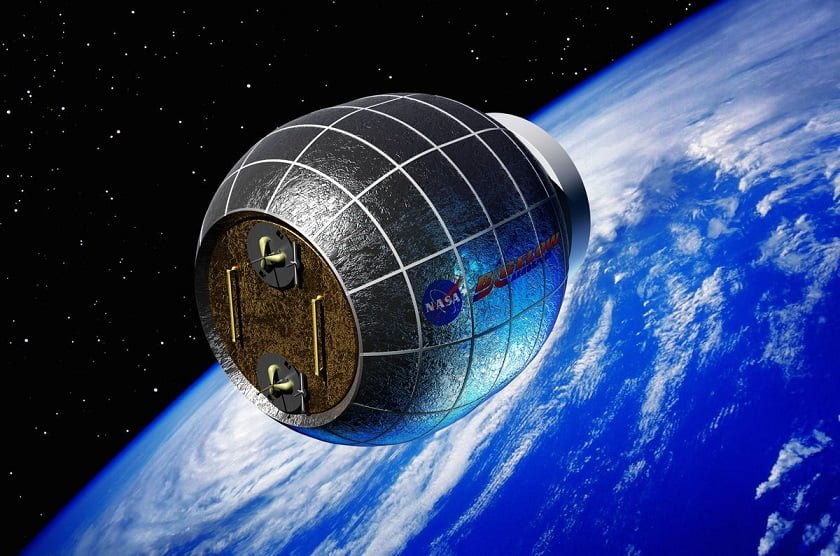 Image: Bigelow Expandable Activity Module (Beam) for space missions, and give NASA astronauts a larger and more comfortable place to live in.

NASA’s Jeffrey Williams, along with Russian cosmonaut Oleg Skripochka became the first astronauts to step inside BEAM. Williams told flight controllers at Mission Control, Houston that BEAM looked pristine and said it was cold inside.

NASA is working with aerospace agencies to create sustainable solutions for effective life support on the Red Planet. In fact, it has signed a deal with Boeing, Bigelow, and Lockheed Martin. With Lockheed Martin, the relationship goes back to building Orion Multipurpose Crew Vehicle (MPCV). Now, it has inked a deal to establish a baseline of habitat designs and mission requirements. NASA is looking to deploy functional habitats in the 2020s.

Jason Crusan, NASA’s director of Advanced Explorations Systems Division says the agency is partnering with corporate resources to pursue the development of space habitats. NASA has big ideas for a habitable space station. This time, it wants its way into any kind of floating human space colonies. This is so humans can work, raise families, and live normal lives in space.

In September 2015, NASA awarded three teams a total of $40,000 in the first stage of the 3-D Printed Habitat Challenge Design Competition at the New York Maker Faire. Entrants to the competition were asked to design a base for four astronauts by using 3D printing techniques and materials indigenous to Mars. All 30 entries were judged on factors, including design approach, architectural concept, habitability, innovation, functionality, 3-D print constructability and Mars site selection. The design competition helped bring out advancement of new technologies necessary to manufacture a space habitat using local indigenous materials, without having to bring materials from Earth.

New York studios SEArch (Space Exploration Architecture) and Clouds AO (Clouds Architecture Office) collaborated on the winning concept for a regolith. SEArch studio also worked together with the Human Factors division at NASA’s Johnson Space Center, to carry out teaching as well as research projects on space exploration. Clouds AO has previously worked on concepts for a space elevator and a proposal to harness the power of comets for interplanetary transportation, including terrestrial projects such as a yoga studio with curved walls to confuse the perception of space.

Recent discoveries of water deposits on Mars, has led Mars to adopt the “follow the water” approach towards exploration. The Mars House project by Team Mars Ice House takes full advantage of the abundance of water-ice on Mars as an indigenous material that acts both as a life-force to sustain a human and plant ecosystem, and when 3D printed, as a primary fabrication material.

Water ice counteracts the traditional dangers of living above ground on the Red Planet. It serves as a barrier to radiation, solar exposure, and the critical chemical hazards on the planetary surface. The semi-translucent exterior shell of the Mars Ice House, will bring the terrestrial concept of interior-to-exterior gradients, and challenges common assumptions that extraterrestrial habitats require impenetrable barriers. The heart shape of the structure, i.e. living quarters benefits from the protection of redundant pressure envelopes. As one moves outwards towards the radiation-barrier ice perimeters, there is a transition towards integrated hydroponic gardens and vistas onto the Martian landscape. 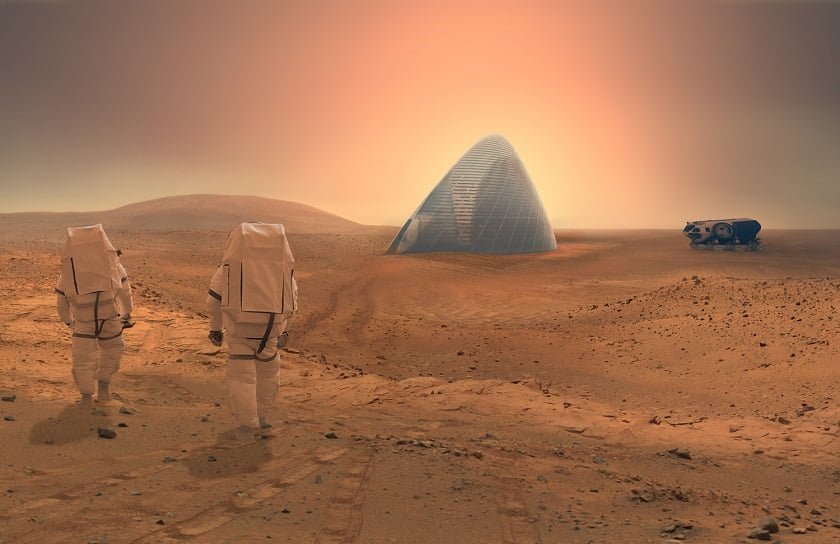 Image: Mars Ice House is 3D printed from water-ice on Mars which shields the crew from radiation, solar exposure, and the critical chemical hazards on Mars.

The vertical oriented heart shaped lander consists of the NASA crew’s Transit Habitat to ease the crew’s adjustment to life on the new surface. The space habitat is stacked with levels organize core programs by activity within the lander. Each new level reveals a private communal interior space. Interior efficiency creates storage pockets at the base of the lander to house bots and the four NASA explorers. Once the lander has been deployed the inflatable ETFE member, pre-fabricated bridges unfold within the lander, thus creating pockets for program. A spiral stair at the core of the lander provides circulation to the upper levels of the habitat. The spiral stair will also offer the crew a means for exercise when ascending levels.

With on-site materials on Mars, 3D printing will allow space explorers to build structures without bringing heavy equipment, supplies, materials, and structures from the home planet. Advanced digital manufacturing techniques will also allow construction semi-autonomously before the arrival of the astronauts. The Mars Ice House has created an action plan for the deployment and construction sequence involving a Mars descent vehicle, a deployable membrane, and semi-autonomous robotic printers to gather and deposit subsurface water ice for the 3D printing of the house.

Second place and $15,000 was awarded to Team Gamma. New York-based Foster + Partners designed a modular habitat for explorers on Mars. The design shows plans for early human settlement on Mars construed by pre-programmed, semi-autonomous robots before the eventual arrival of explorers on the red soil. The design, envisions a strong 3D printed dwelling for up to four astronauts using loose soil and rocks found on the surface of Mars.

The proposal also includes the various aspects of delivery and deployment to construction and operations. Three different kinds of robots will be parachuted to Mars’ surface, each performing a specialized task within the large-scale Regolith. 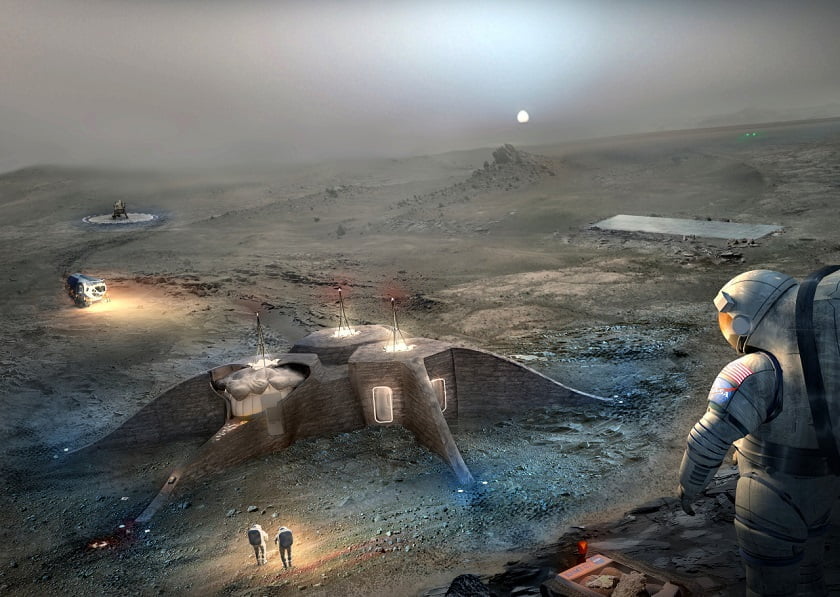 Image: A NASA Mars settlement by Team Gamma that could be 3D printed from regolith by pre-programmed, semi-autonomous robots.

Additive Construction (RAC) process. Large ‘Diggers’ will create the crater by excavating the regolith, medium-sized ‘Transporters’ will move into the position over the inflatable habitat modules layer by layer. Small ‘Melters’ will fuse loose Martian soil using microwaves around the inflatable habitat modules using 3D printing techniques. The fused regolith creates a permanent shield that protects the explorers from the extreme conditions on Mars.

The 93 square meter habitat module combines spatial efficiency along with human psychology and physiology, intersecting with private and communal spaces. It continues the earlier design explorations such as the Lunar Habitation in consortium with the European Space Agency for creating a positive living environment for astronauts.

Similar to Gamma, LavaHive is a modular additive-manufactured space habitat design which is made using a novel ‘lava-casting’ construction technique. The design incorporates discarded components as key elements of the habitat concept. The black shell of EDL (entry, descent, and landing) system will deliver the construction rovers. This will be used for the primary habitat roof, along with an inflatable module underneath as the primary living habitat. Using Martian regolith, two rovers will use sintering and lava-casting to build connecting corridors and sub-habitats around the inflatable section. 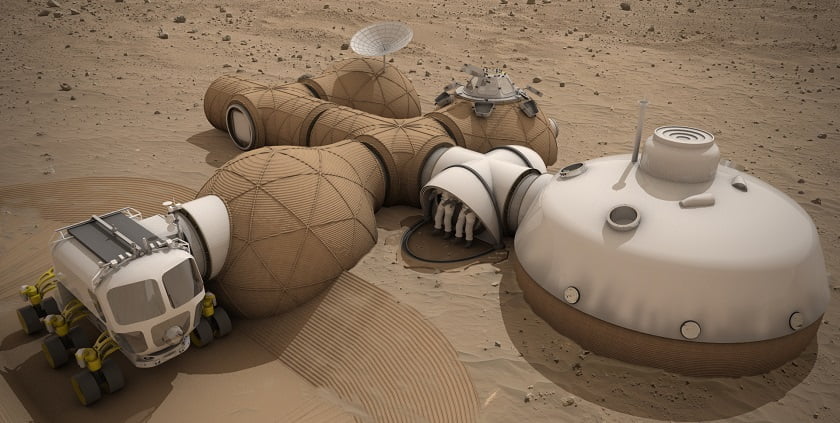 These sub habitats will be fitted and sealed internally with epoxy and furnished as a research area or greenhouse. The approach represents a unique application of the additive manufacturing technology using readily available resources and spacecraft components.

Despite NASA’s proposed mission to Mars in the 2030s, it’s still a long way to go when we finally share the planet with probes and robotic rovers. The idea of an idyllic suburban life in space has been revived post the 70s stagflation. It evokes the unabashedly utopian fantasy that people had seen before. It’s still a long way to go, nonetheless, the aspirations they project are timeless.