Enjoy the edge over others by unlocking the eFootball 23 Messi Cards as the immensely popular game decides to celebrate the GOAT’s maiden FIFA World Cup glory with the launch of a special card.

They call for special attention. Hence, we will go ahead with our quick tour that covers up almost everything – speciality about each card, how to unlock them and how to make the most of them by coming up with the right strategies. 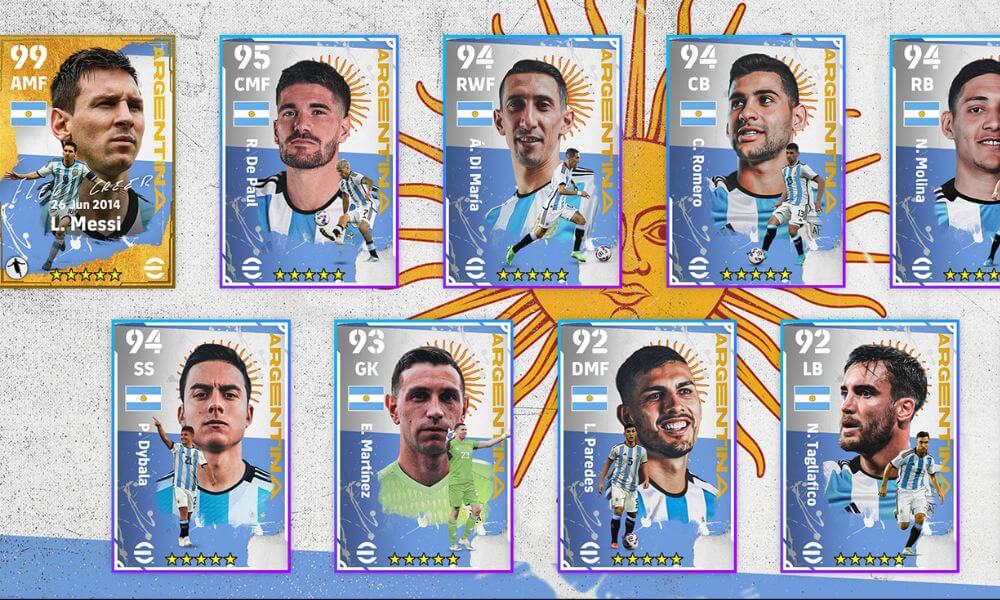 This specially designed card of Lionel Messi in eFootball 23 is extremely powerful as it comes with special attributes. [Image Credit: eFootball 23]

Messi Cards in eFootball 23: Have the Magician in Your Team

It has been almost two weeks since arguably the greatest player ever to grace the football fields lifted the most coveted silverware in the world of football – the FIFA World Cup. He missed it by a whisker in 2014, when a Mario Gotze-winner in the extra time triggered a heartbreaking story for millions of football fans across the world.

This time, it was a dream come true. He managed to sing the redemption song in an unreal manner! After a shocking 1-2 defeat against minnows Saudi Arabia, Argentina was on the verge of extinction. From leaning dangerously, they managed to pull a fairytale World Cup triumph off, after a wait of 36 years, since Diego Maradona guided the Albicelestes to their second World Cup victory.

Lionel Messi in eFootball 23 is something that dreams are made of, so far as gamers are concerned. Even if you are not a Messi fanatic (it’s extremely difficult to hold yourself from falling in love with the Argentine magician), he can help you out time out time and again, when the in-game situation tends to go messy.

Even though it’s a Base Card, it becomes quite handy if you train it to the fullest of its capacities. From impeccable set-piece taking qualities to out-of-the-world finishing skills – it has it all. You can get hold of it by spending a huge stack of GPs from the Standard Players List.

If you are having this, then it must have been carried forward from eFootball 22 as an in-game item. However, in order to play with it in normal matches (in Friend Matches it won’t need a contract renewal) you have to do a Contract Renewal.

Either you have to use a Contract Ticket, if you have any at your disposal, otherwise, you need to buy one from the eFootball Points Store, using 25,000 eFootball Points. This is a gem of a card and plays at its very best as a classic no. 10 or as a RWF.

You can have it with the National Pack: Argentina 22 [Premium]. It would cost you 1500 eFootball Coins to unlock it. Apart from a “Big Time” Lionel Messi card with Exclusive designs alongside player motto, you will also get 10 other Argentina National Team players of Highlight nature.

This specially designed card of Lionel Messi in eFootball 23 is extremely powerful as it comes with special attributes. This LM10 card too, would be most effective in a playmaker role as it’s originally AMF in nature.

This is a limited time card, which was designed to celebrate the World Cup triumph of the GOAT. It was rolled out for free. It’s still up for grabs. The card is of OP level and delivers inch-perfect set-pieces and god level final passes.

To get this, you don’t need to spend any in-game assets. Just login within the given time and collect it from your inbox.

This is another Special Card, which came out after the FIFA World Cup final. Along with Mbappe and Gvardiol, Konami came up with the Epic Card of Lionel Messi, which can simply run riot through the opposition defence even at the age of 35, much like the master himself, who showcased some unreal moments of brilliance during the recently-concluded FIFA World Cup in Qatar.

This is a surreal card, with surreal stats. You have to continue spending 100 eFootball Coins to draw each time, until the god becomes kind enough to send the god of football to you.

All the eFootball 23 Messi Cards are top-notch in their own rights. Get hold of as many of them as possible and surprise your opponents with an act of god, each time the situation seems to be the end of the road for you. Kudos to the GOAT! Happy Gaming!

How to do a Contract Renewal in eFootball 23?

How much does the National Pack: Argentina 22 [Premium] cost?

The National Pack: Argentina 22 [Premium] would cost you 1500 eFootball Coins.