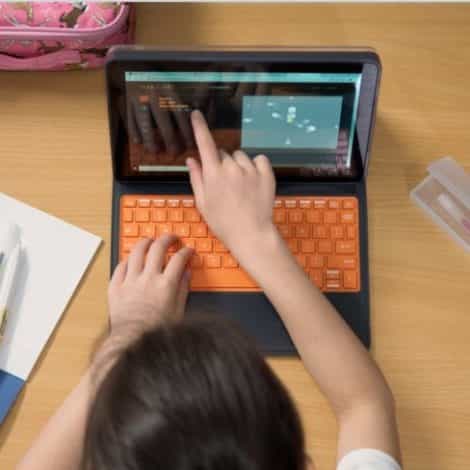 Educational start-up Kano, famous for creating build-your-own computer kits for kids, has collaborated with Microsoft to make a DIY touch-screen laptop. This system is called the Kano PC, equipped with Windows 10 S and it is strikingly similar to the design of a Surface PC, with an 11.6” display that is attached to the keyboard case.

According to Kano, everything about the PC from the transparent backside that reveals the modular pieces of the computer, to the advanced preloaded applications that encourage fiddling with sound and touch, the PC is specially designed “for the 21st-century classroom”.

The earlier DIY computer kits released by Kano before were powered by Raspberry Pi 3s and own OS. This PC is powered by the Windows 10. The touch-screen PC is powered by a 1.44 GHz Intel Atom x5-Z8350 quad-core processor, 4GB of RAM, and 64GB of storage that’s upgradeable with a microSD card. There is also an HDMI port, a headphone jack, microphone, 2 USB ports, plus WiFi and Bluetooth in the PC.

Alex Klein, Kano’s founder and CEO, stated that while Kano technology company will continue to support its Raspberry Pi-powered devices, it has yet to determine what its roadmap will be in terms of launching new hardware on this processor. “The Raspberry Pi devices remain in the portfolio at good price points, but this machine is designed for a much broader age set. It’s a proper Windows PC” — Klein said, pointing to the Intel Atom x5-Z8350 Quad-core 1.44 GHz processor, the 4GB of memory, and 64GB of storage — “and a powerful machine for the price point’, Klein said.

With the Kano PC, kids can easily learn to assemble their computer through step-by-step instruction given as a storybook. They can also know more from the app called “How Computers Work”, which teaches them coding techniques and how to create emoji with binary code. An education edition of Minecraft is also included in the PC, along with Microsoft apps like Paint 3D and Microsoft Teams. The Kano PC is available for pre-order on the official site and Microsoft store for $299.99. The PC will be launched in the US, Canada, and the UK on October 21.

The Kano PC is also equipped with the following features:

Preloaded with Windows 10, its compatibility with Office Suite, and backed with optimized software and parent/teacher dashboards, the Kano PC is a safe, creative playground for children. The PC also connects children to the free online community of Kano World, where they can create, share, and play in a safe space with thousands of fellow creators across 150 countries.

The Microsoft collaboration with Kano will bring the company a higher profile among a broader set of consumers. It is also likely a new entry point into selling across educational environments, where Microsoft has been already making a big push. Microsoft itself has a long found history of dealing with software and hardware into educational environments and this collaboration with a different brand will bring move diversity into the mix, as it is a brand designed specifically for younger people, rather than adult-focused brands. “We’re very excited to partner with Kano for the launch of the Kano PC. We align with Kano’s goal of making classroom experiences more inclusive for teachers and students, empowering them to build the future, not just imagine it,” said Anthony Salcito, VP of Education at Microsoft.