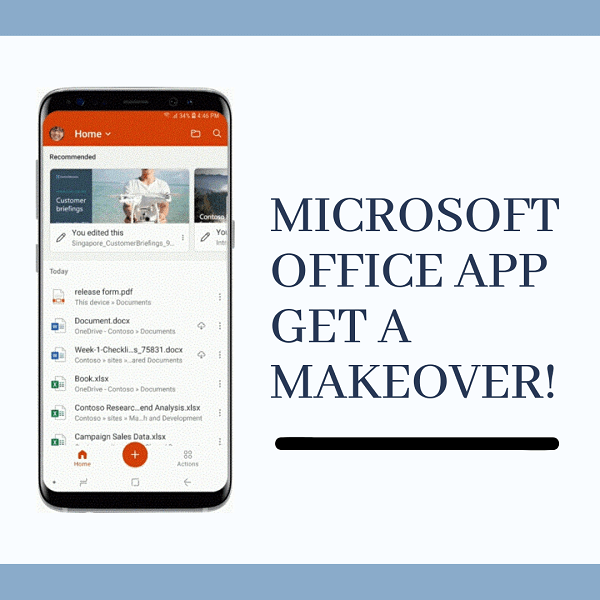 Technology giant Microsoft has launched an innovative and fresh all-in-one app called the ‘Microsoft Office’ app. This app is meant for the users of Microsoft services like Word, Excel, and PowerPoint. The app is available for Android users on Google’s Play Store. Microsoft will be planing to introduce Azure Communication Services. Azure Communication Services is built natively on top a global, reliable cloud — Azure.

The Microsoft Office app was screened under testing in early 2019 and reached for proper public review in November. With this Office app, Microsoft is taking an ethical approach, which is precisely the opposite of Google’s company. Google earlier launched a similar app, called the ‘Google Drive’ for viewing as well as editing docs. Still, Google later launched multiple apps of each of its services, giving the users to install the apps and services they only require in daily use.

However, Microsoft newly launched ‘Office’ app, at present, doesn’t support tablets or any other Chrome books. It is a combination of the three services of Microsoft, namely Word, Excel, and PowerPoint into one app. The users who download will be able to work on documents, files, spreadsheets as well as presentations using this single Microsoft Office app. The app comes with proper templates for documents like CV, resume, budget, and even presentations. The created files and materials will be effectively stored in the personal cloud storage of the user, on the device, or the organization (if the person is using a work account).

Additional characteristics of the Microsoft Office app include the ability to take a screenshot or click a picture of a document and convert it into an editable Word format file. This is similar to a table by clicking an image of it and transforming it into a proper Excel spreadsheet. The app also offers the users the option to share multiple files to all nearby devices as well as effectively scan QR codes to open files and links.

The Microsoft Office app will require the users to login with an active Microsoft Account (for the OneDrive or SharePoint connect) or by connecting it to a third-party cloud storage provider. The users who log in with any personal, work, or education Microsoft Account, connected to any Office 365 subscription, will be able to unlock the premium features within the app itself.

Microsoft broadcasted today, 23rd September, 2020 that it’s equipped to compete with Twilio by launching a set of features that permits developers to enhance voice and video calling, chat, text messages and old-school telephony to their apps.

This is just one of a numeral of announcements that Microsoft made at its Ignite conference this morning. Other additions include a platform for perceiving biological threats and the Azure Orbital service for satellite operators.

Amazon adds support for Kannada, Malayalam, Tamil and Telugu in local Indian languages push ahead of Diwali — The company said this transfer should help it reach an additional 200-300 million users in India.

Pinterest breaks everyday download record owing to user interest in iOS 14 design ideas — Following the release of iOS 14, the enthusiasm around the aptitude to customize your iPhone home screen has been paying off for Pinterest.

Mirakl raises $300 million for its marketplace platform — Mirakl supports companies launch and manage a marketplace on their e-commerce websites.

Big tech has 2 elephants in the room: Privacy and competition — There’s obviously a nervousness among even well-established tech firms to debate this topic.