At its annual hardware event held in New York City, Microsoft Corp. introduced refreshed versions of Surface Pro, Surface Laptop, Surface Studio and an all-new pair of Surface headphones to compliment the ensemble. It also rolled out major upgrades in Windows and Office 365.

The next-generation Surface products announced at the event – Surface Pro 6, Surface Laptop 2, and Surface Studio 2 – now available to pre-order. All of these devices are coming up with faster processors and a new design alternative, which is Matte Black finish.

With the installation of the new engine, the battery life of the 6th-Gen Surface Pro turns out to be 13.5 hours, unlike 8 hours of what is available in its predecessor.

Other than bringing an all-new Matte Black color option, no significant change is visible outside the new 2-in-1 detachable Surface Pro device.

Even the connectivity ports are similar on both generations of Surface Pro, namely, one USB 3.0 port, Mini DisplayPort, 3.5 mm headphone jack, one Surface Connect port, microSD card reader slot. Yes, Microsoft still did not board a USB Type-C/Thunderbolt 3 port on Surface Pro 6.

Microsoft also launched Surface Type Cover in Black tone, but if you want to add a tint of color to your device, these keyboards are available in Burgandy, Cobalt Blue, and Platinum.

The company will begin shipping Microsoft Surface Pro 6 from October 16th. The starting price of 8GB Surface Pro 6 with Intel Core i5 is $899, a $100 more than the existing model. This price doesn’t include Surface Type Cover and Surface Pen. For the accessories, one needs to shell out an additional $160 and $100, respectively. 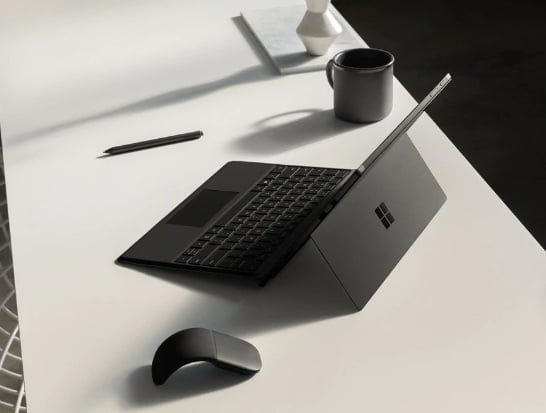 The starting price of 8GB Surface Pro 6 with Intel Core i5 is $899. Source: Microsoft

Apart from the Surface computers, Microsoft surprised everyone in the audience by unveiling all-new vertical in the Surface hardware category- Surface Headphones. These are wireless, over-the-ears pair of headphones worth $349 designed to complete Surface experience.

Each ear cup is configured with 2 beam-forming microphones and overall there are 8 microphones on the headphones. The company will begin shipping the new hardware from this holiday season.