Back in June 2015, Microsoft purchased the popular to-do list application Wunderlist. The Redmond tech giant is now planning to enhance its to-do product and so has launched a new to-do list app Microsoft To-Do that is likely to replace the old Wunderlist. For long, the company has been testing the app under the codename ‘Project Cheshire’.

The new To-Do app is built by the Wunderlist team and so will infuse all the best elements of the popular old app in the coming months, says Microsoft. The Windows giant also added that it will not shut down the Wunderlist app until it will incorporate the best of Wunderlist into To-Do. But this is not an indication for the Wunderlist app to last parallel with To-Do. The company in its blog post has clearly mentioned that it will retire Wunderlist. By the same token, the company is currently offering a switch over by letting the Wunderlist users import the stored lists and to-do’s into To-do app. The items in the new To-Do app will also be available in other Microsoft products like Exchange and Outlook.

The new Microsoft To-Do app allows the users to create lists, add items, set reminders, and sync list. The highlight of the app is the My-Day feature that allows you to focus on the lists of items scheduled for the day. There is an intelligent Suggestions feature that provides you automated suggestions based on the upcoming items or your old lists. You need to tap the light bulb icon on the side to activate the suggestions features. 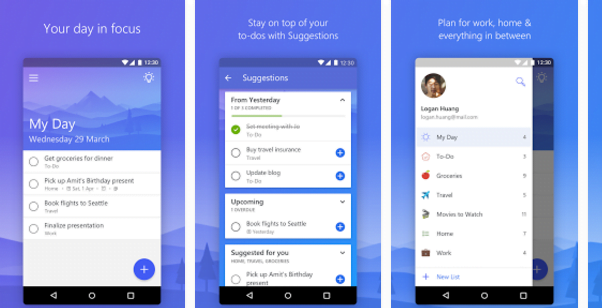 Microsoft has built the To-Do app to integrate with Microsoft Office. The app is built on Office 365 and you can integrate with Outlook and other platforms. Hence, you can synchronize with To-Do and access and manage it from different devices.

The To-Do app does not include all the features of the Wunderlist yet. But Microsoft promises to soon add all the features of Wunderlist into the To-Do and provide us an enhanced version. The preview version of the To-Do is available for the admins of the Office 365 admin center. The app is robustly built, compatible with all the platforms – iPhone, Android, Windows, and web.

Microsoft told ZDNet that the app is not just for Office 365 users. Anyone having a Microsoft account can use the To-do app even if they do not have the Office 365 plan, clarifies the company.

Currently, there are certain fallbacks in the To-do app and is not a perfect replacement yet for the Wunderlist users. There are certain complaints about the preview version that the app does not fully support Mac, iPad and Android tablet. Also, list sharing is not possible in the To-Do. But Microsoft ensures that all these will roll out with the integrations with Microsoft services.

Certain sources from the Microsoft give an indication that the app might also support integrations with the Amazon Alexa. The Wunderlist is already a fabulous app with amazing features. Since To-Do is likely a replacement for the old app, we would expect its final version to offer more.