Say hello to Microsoft’s newest Surface product, the Surface Laptop, a stunning piece of hardware meant to compete with the MacBook Air. There are two things you’ll immediately dig about the new Surface Laptop: it’s lighter and faster, and it borrows a lot of its design and feel from Microsoft’s Surface Pro 4. The device is billed as the perfect tool for higher education, yet the economical price, portability and the features could appeal to a much broader audience, including Apple fanboys. For a closer look, here it’s the Surface Laptop review. 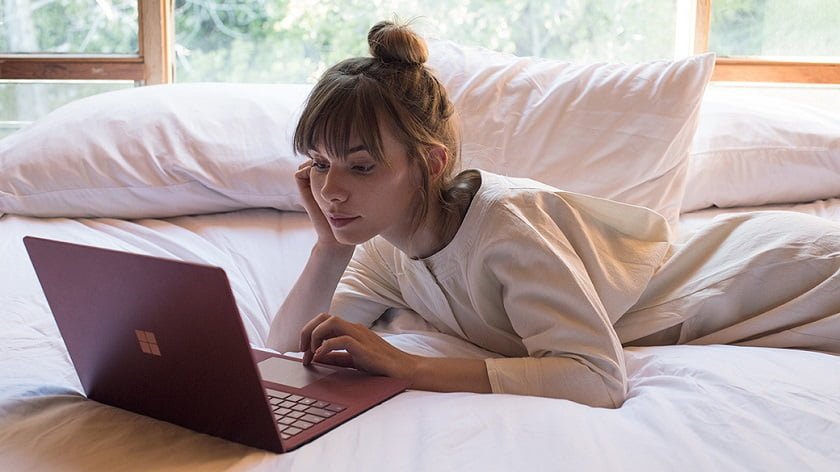 The processor will be Intel Core i5 or optional Core i7 running on up to 16GB RAM with up to 512GB of SSD storage. The laptop runs on Windows 10 S, and has pretty serious limitations. For instance, it can only run on apps from the Windows Store – or the Universal Windows Apps platforms. (Unrelated: On its official website, Microsoft announced that Win 10 S would be available for its partner devices including Acer, ASUS, Dell, Fujitsu, HP, Samsung, and Toshiba.) With its 13.5-inch display in 3:2 aspect ratio, it’s larger than the 13-inch MacBook Pro with 16:10 display.

The Surface Laptop borrows a lot of its design and feel from Microsoft’s Surface Pro 4. It features a classic clamshell design and a keyboard that is covered with a cloth-like material called Alcantara. Unlike its older siblings, the Surface Laptop doesn’t offer the flipping or the detaching screen functionality.

There are no visible speaker holes or grills on the Surface Laptop, says Panos Panay, Microsoft’s corporate vice president. The laptop’s speakers are fitted underneath the skin of the device. It sports a single USB 3 port, mini DisplayPort, an SD card slot, a headphone jack and the conventional Surface power connector. Surprisingly, Microsoft chose to take the primitive route by not adapting to the USB Type C-port and Thunderbolt.

Thanks to the aluminum finish and design, the 13.5-inch device weighs 2.76 lbs. making it lighter than the 13-inch MacBook Pro. Basically, it’s rugged enough to withstand the wear and tear for classroom use.

The laptop offers14.5 hours battery life of video playback from a single charge due to Windows 10 S’ battery savings and its impeccably efficient hardware. Put it on standby time and go on a Christmas holiday in the French Alps, and you still have the same battery when you return. You compare it to the current Core i7-based MacBook Pro, and it’s a given that the Surface Laptop battery life is far better.

The base model is reasonably priced at $999 and is available for pre-order now for the June 15th release. But, for a device specifically designed for college students, the price point is north of what one would call “economical.”

Although, these prices don’t include a Surface Pen, or the Surface Dial.

Besides, no matter how thin or elegant or economical the Surface Laptop is, Apple fanboys will still obviously have irrepressible hatred for anything from Redmond. This brings us to the terrifying aspect…

Which one is better: Surface Laptop or MacBook?

After careful consideration, we decided that the longer battery life and the potential for Universal apps make it worth the $999 price. It’s definitely not a Chromebook pixel competitor. Think of it as Microsoft’s MacBook Air, but a much better version.