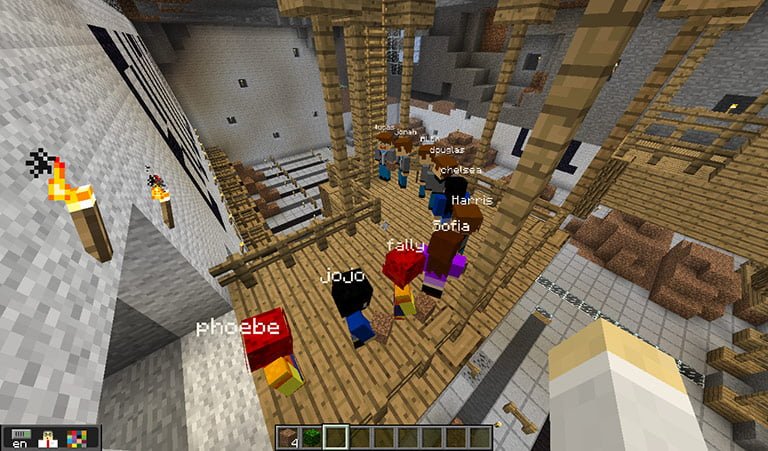 MinecraftEdu is a creative outlet for kids who can’t otherwise express themselves. For example, if you want to explore Ancient Egyptian or Mesopotamian culture, you can easily explore by experimenting with the design or layouts of the agrarian society that gifted the world its first irrigation system of dug canals. If you want to explore the basics of electronics, it lays out the foundation of a virtual world of logic gates to learn about the implementation of elemental structures such as a chip, micro-controllers made up of AND, OR, NAND, NOR, XOR, and NOT digital logical gates.

MinecraftEdu is modified version of the popular game ‘Minecraft’ where teachers and students explore every academic discipline in pixel art. Microsoft, which had previously acquired Majong, Minecraft’s Swedish creator in a massive $2.5 million deal, plans to announce it has acquired MinecraftEdu.

The modified version of the game, created by New York City school teacher Joel Levin, has gained a strong follower base in last four years and is used in over 7,000 classrooms around the world.

Subsequent the acquisition, the software giant hopes to get a mighty grip in areas such as education which has been shaken up by companies like Apple and Google who have made strong inroads in the education arena. According to Microsoft, Minecraft was the top paid app on Apple App Store and Google Play and is the best-selling PC game of all time. It has amassed over 5 billion hours of viewing time by more than 160 million people on YouTube. It continues to be a huge success with over 100 million players.

But, Microsoft executives hope to bank in on more than just the entertainment factor. Perhaps, the performance of the stand-alone entity shall now be tested on the educational platform.

Schools throughout the U.S. run Microsoft’s OS, however, with the rise of mobile computing devices including Google Chromebooks and Apple iPads, there’s evidence that the business is dwindling. Offering free productivity tools such as Office 365 Educations, and Skype as a video conferencing platform for teachers and students in schools is not enough.

Moreover, in the competitive landscape, it is losing out on a large user base since Google launched the free software program called Google Apps for Education, which has been downloaded by more than 50 million teachers, students, and administrators worldwide.

By positioning the education edition of the game as a compelling tool for learning in the classroom, Microsoft will be able to blanket a large chunk of the educational milieu.

For access to the education edition of Minecraft, Microsoft plans to charge schools $5 per student annuals. For wide adoption, it may perhaps offer volume discounts for district schools to make it available to all students. The previous set-up of the game required schools to run a separate server for multiplayer use. The new set-up will let students log in using their school IDs from any device.

Well, there is very little evidence to demonstrate whether the game has improved academic results, researchers and teachers believe it can prove to be a learning tool for students helping them with design thinking, collaboration, and creative problem-solving.

Microsoft is yet to reveal the financial specifics of the deal.