Microsoft’s 343 Industries has teamed up with Limbitless Solutions to create Halo-themed, 3D-printed prosthetic arms for kids. Interesting, the prosthetic arms, which have fully functional hands that can grip objects through EMG sensors, are donated free of charge to recipients – obviously the best part of it.

Limbitless’ design lineup, which already features adorable Iron Man arm, will include two Halo-themed options beginning from next year, reports TheVerge. Kids can recreate Master Chief’s Mark VI gauntlet in his iconic green, and there’s an option for a “multiplayer” version that kids can modify using their favorite color. This is to enable the kids to play with a certain color Spartan in the game and simultaneously wear the same color in the real world.

Microsoft has recently worked on bringing accessibility to gamers and this looks remarkably true and accurate to the aesthetic of the game. The company recently launched an Adaptive controller for its Xbox. The controller, which is released for players with disabilities, has two large buttons that can be programmed and 19 connectivity enabled jacks for joysticks and other accessories that gamers using Xbox One consoles and Windows 10 PCs can use. 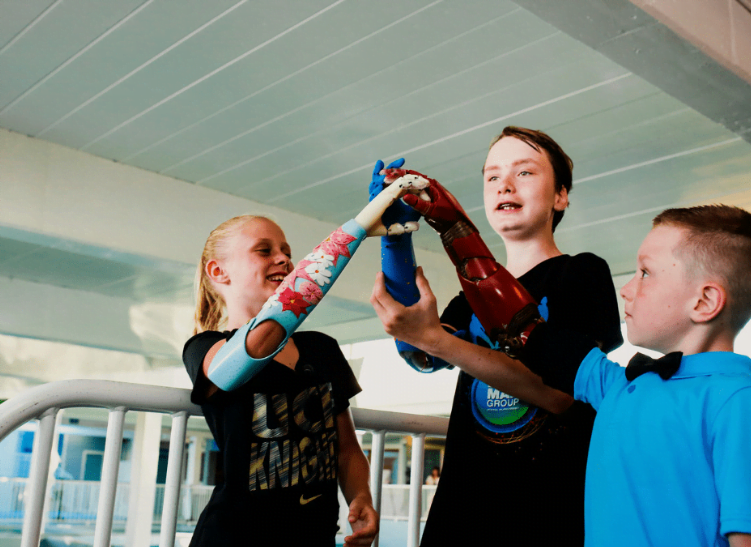 Limbitless has collaborated with many other companies aside from Microsoft. Video game developer Riot Games recently teamed up with the non-profit organization during its Thunderdome hackathon to create five legend-themed prosthetic arms; Maokai designs, Illaoi, Shurima, Star Guardian, and landing on Odyssey Jinx. Kids will be able to acquire any of the five designs in 2019.

Kids tend to feel more comfortable with their new prosthetic arms because of the games, says Limbitless. Hence, the organization, which began in 2014 as a group of University of Central Florida students, creates its own video games to help the kids with getting used to their 3D printed arms. They are able to control the fingers using built-in EMG sensors that can pick up different patterns on the arms. Video game-inspired prosthetic arms can empower many kids to feel like heroes while they are trying to adapt with the arms.

The Halo-themed prosthetic arms will be available early 2019 and should be distributed by Limbitless Solutions.