This Mini Robot moves by Magnetism and Light

The tiny wireless aquatic robot, inspired by a coral polyp, is reported to hold the potential to clean water and transport cells.

Scientists at Eindhoven University of Technology, Netherlands, have reportedly developed a tiny plastic robot that moves under the influence of magnetism and light. This new robotic machine can grab and release objects underwater, and the team envisages a wide range of applications for it, including collecting contaminants or as a tool in biomedicine. Subsequently, the wireless robot is supposed to be able to attract and capture contaminant particles from the surrounding liquid or pick up and transport cells for analysis in diagnostic devices. The results of the researchers were published in the journal PNAS. 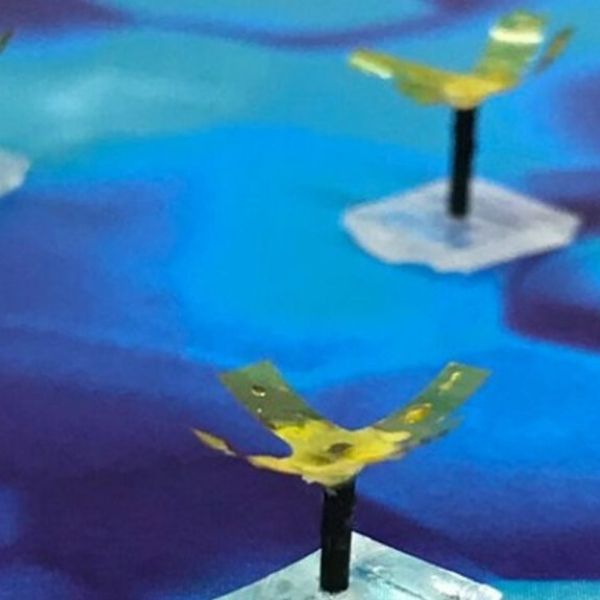 What inspired the experiment of Mini Robot ?

The inspiration for the creation of this mini robot, made of responsive polymers, was drawn from a tiny tentacle marine creature, a coral polyp. Coral polyps are tiny and soft organisms that eventually band together in huge numbers to form coral reefs in the ocean. These little creatures have a central stem that makes specific movements to generate small currents that in turn attract food particles. Consequently, the floating food particles are grabbed by the tentacles. This is where the researchers saw some remarkable possibilities. “I was inspired by the motion of these coral polyps, especially their ability to interact with the environment through self-made currents”, said Marina Pilz Da Cunha, a doctoral candidate.

Development of the Wireless Polyp

The crafted wireless artificial polyp is one by one cm and has a stem that reacts to magnetism and light steered tentacles. “Combining two different stimuli is rare since it requires careful material preparation and assembly, but it is interesting for creating untethered robots because it allows for complex shape changes and tasks to be performed,” enlightens Pilz Da Cunha. The tentacles which move by shining light on them respond variably to different wavelengths. When exposed to UV light, the tentacles react with a “grabbing” motion, while blue light makes them to “release.”

More advantageous from the light-guided version presented earlier this year, this improved device comes with a photomechanical polymer material that moves under the influence of light only, making it capable of grabbing and releasing things underwater. The land-based robot couldn’t work underwater, because that robot was made of photo-thermal polymers. The heat generated by the light fueled the robot, instead of the light itself. According to Pilz Da Cunha, “Heat dissipates in water, which makes it impossible to steer the robot underwater.”

Apart from the benefit of operating underwater, the new robot can hold its deformation after being activated by light. In one trial, the team demonstrated the efficiencies of its polyp-inspired robot by having it snare droplets of oil from within a sample of water. While the photo-thermal material immediately goes back to its original shape after the stimuli have been detached, the molecules in the photomechanical material undertake a new state.

This allows diverse stable shapes, which could be maintained for a more extended period. “That helps to control the gripper arm; once something has been captured, the robot can keep holding it until it is addressed by light once again to release it,” clarifies Pilz Da Cunha.

There is a rotating magnet placed underneath the wireless aquatic robot which makes the stem circle around its axis. This also further explains that the position of the tentacles turns out to influence the flow of the fluid.

“It was, therefore, possible to move floating objects in the water towards the polyp, in our case oil droplets. Computer simulations, with different tentacle positions, eventually helped us to understand and get the movement of the stem exactly right. And to ‘attract’ the oil droplets towards the tentacles,” says Pilz Da Cunha.

Additionally, the robot works independently from the composition of the surrounding liquid, which is a unique feature. This is because the dominant stimuli-responsive material used for underwater applications, currently hydrogels, is sensitive for their environment. Hydrogels, as a result, behave differently in contaminated water.

As the next steps, the team plans to create a collection of polyps that could work together. They hope that this fleet of mini robots could potentially work together to transport particles, with one passing them onto the next. They eventually envision biomedical applications such as capturing specific cells with a possible future device of a swimming robot.