Major League Baseball Players Association is launching their own app called Infield Chatter, a custom social network just for players and fans. Back in 2015, MLB players announced plans to start an online community with the same name. While it got a lot of hype from players, it never gained enough traction to be launched to the public.

Just like any other social networks, it may take some getting used to if you’re a new kid on the block. Each person has their own profile and can post pictures, videos, comments, status, etc. You can follow your favorite players and comment on their posts. Verified players can engage back with the fans.

Infield Chatter brings some more unique features, with one quite similar AMA on Reddit and contests to win memorabilia and exclusive experiences with MLB players. The best part is that it’s quite baseball themed, so instead of “likes” you can give a “fist bump” to each post. 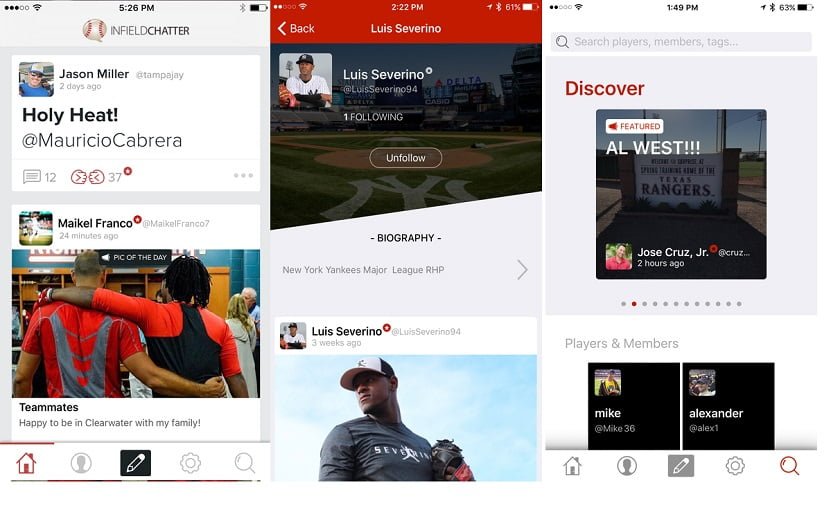 Although it’s a hive app, it doesn’t come with the inherent fallacies. For instance, no matter how many people download the social network for baseball fans, they’ll just leave until there are a bunch of players to engage with. With over 1,000 MLB players already onboard as registered users, the network is just enough sustainable to have newcomers trickling in, to get a large number of users at once. Infield Chatter has every player in the league signed up, with an interest in seeing that it gets more mileage to rise to prominence.

A Social Network for Baseball Fans

The social network for baseball fans was built at the request of MLB players who wanted a more personal way to engage with fans. Flagship platforms like Facebook, Twitter and Instagram have a wide reach, they’re not exclusive enough and so fans easily miss the content the players want them to see. More or less, the app would help players develop their personal branding.

Quite a lot of baseball league players have over a million followers, and it’s likely that those fans will follow suit and sign up to the app. Players would be able to comment and engage with fans, something that doesn’t happen as much on other platforms unless there’s some trolling involved.

Infield Chatter was built with the help of a startup called Honeycomb, which helps build social networks for fans. Not so long ago, they built a custom app for Lady Gaga to interact with her fans on a more personal level than that allowed on social networks like Facebook and Twitter.

Currently, the social network has no plans to generate revenue. But it’s likely that the association won’t rule out the possibility of banking on it either.

The social network for baseball fans is available to download on the iOS App Store and Google Play.