Apple executives recently announced that the company is working on an updated Mac Pro that would feature a modular design. The new Apple Mac Pro will infuse the advanced version of its regular components.

The modular Apple Mac Pro would be a perfect fit for the pro users. But the launch of the new, high-end Mac Pro is at least a year away as Apple has just put their hands on the development. So, we don’t have any specific idea about the ‘modular’ device. But the designers at Curved made a conceptual design portraying the look and specs of the high-tech Mac Pro.

The concept by Curved takes a form factor somewhat between the Apple’s Mac mini and the smaller version of the Apple’s old Mac Pro design. The Mac Pro upgrade known to be expandable than any of the Mac ever, Curved has developed a concept that hinges on both the sides to fit in the format. The console design sports two slots for full-sized graphic cards, rotating sides and easily accessible sections for the processor, RAM and storage. 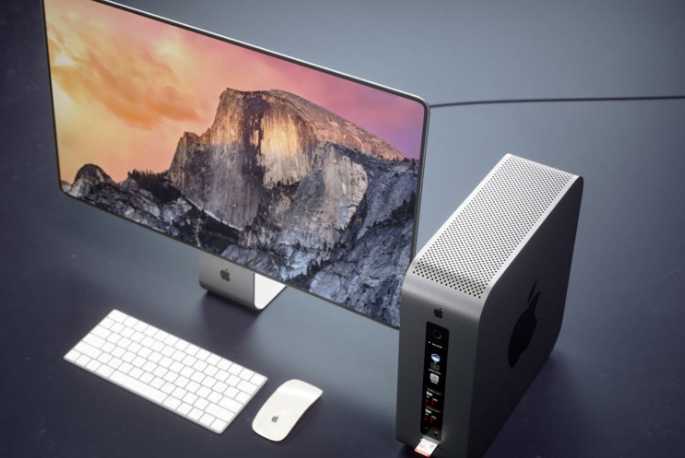 There are holes on the top in the design to allow the hot air to escape. Additionally, there is a Touch ID button which does not make total sense, for most of the users prefer to place the console below the desk. Also, there is a Touch Bar for operating the core components. The console accommodates a USB-C, USB-A and HDMI ports along with the microphone and headphone jack.

Alongside the Mac Pro, the Curved also revamped the design of a 27-inch Apple Cinema Display with ultra-thin bezels, an iMac style stand and USB-C ports at the back. Apple also confirmed that they will return to making the external displays. The news broke out after the reports that Apple was exiting its display standalone business and would be keeping LG-made displays as the official options for its MacBook Pro.

Apple hasn’t yet given us any hints officially about the Mac Pro. So there is no official representative of what the modular Mac Pro would be like. But it will be a high-end console that will provide higher throughput. The machine will facilitate regular upgrades to satisfy the company’s pro users.

We just really don’t know the sole motive behind the release of revamped design by the Curved. Is it purely on the basis of estimation or do they have any hints? We hope that at least certain specs of this highly roared design make out to the Apple Mac Pro release.