By early morning today, the National Aeronautics and Space Administration (NASA) will document the biggest milestone in the history of humanity. The space exploration organization is all set to launch its newest spacecraft, Parker Solar Probe into space at 3:30 am EDT (0733 GMT).

The moment is historic as Parker Solar Probe is underpinning a decades-old mission of “touch the sky”. In detail, the NASA newest spacecraft is constructed to reach closer to the sun than any other spacecraft lifted to date. The main purpose of the Probe is to fly into the sun’s million-degree outer atmosphere, known as corona and crackdown new mysteries about it.

At the time of writing this article, the NASA spacecraft is nearly ready to take-off on a massive United Launch Alliance Delta IV Heavy rocket at Cape Canaveral Air Force Station in Florida ahead of today’s (August 11, 2018) scheduled landmark launch mission. The launching rocket measures 72m tall and 15m broad, and loads over 600 tons of fuel.

“We’ve looked at it [corona] in every single different way you can imagine, every wavelength; we’ve traveled beyond the orbit of Mercury even. But we need to get into this action region and into the region where all of these mysteries are really occurring,” said project scientist Nicola Fox, a solar scientist at Johns Hopkins University during a press conference held last month.

The launch of our Parker #SolarProbe spacecraft marks the beginning of a historic journey to fly closer to Sun than any other human-made object. Here’s what we hope to learn from the mission that launches at 3:33 am ET on Saturday, Aug. 11: https://t.co/N5Psu9bQjs pic.twitter.com/PH0tncY5Ay

NASA’s Parker Solar Probe is a $1.5 billion mission encroaching into an entirely unexplored territory of the Universe – Sun.

To reach near the sun, the NASA spacecraft includes a technology comprising an element known as a heat shield. It is a block of cautiously engineered carbon particles to keep the spaceship and its internal components cool when subjected to an atmospheric temperature of 2,500 degrees Fahrenheit (1,370 degrees Celsius) atmosphere. Moreover, the spacecraft is installed with solar panels to control the input heat while traveling so close to the sun.

Parker Solar Probe is additionally covered by Kevlar blanket to protect itself from “hypervelocity dust environment” – a cluster of tiny, fast-moving particles.

The spacecraft’s expedition itinerary includes a stopover at Venus immediately after breaking off from the Earth. Here, it will revolve around the planet seven times in about six weeks. This mid-break during the voyage to the Sun is indeed required to slow down the powerful momentum propelled into Parker Solar Probe to escape the Blue planet’s pull.

The NASA spacecraft will then take a flight to its ultimate destination –Sun. It will swing around the brightest star 24 times over the next seven years. Parker Solar Probe will eventually settle within only 3.83 million miles (6.16 million kilometers) of the sun’s surface at the closest distance. Thereby, it will start collecting key insights about the target celestial body and activity. 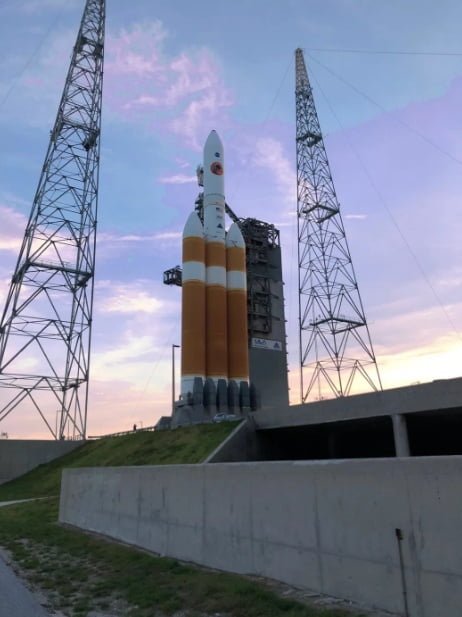 At this point, NASA’s newest spacecraft will again accelerate at about 430,000 mph (692,000 km/h) influenced by the Sun’s gravitational force, informed NASA officials. Visualize this speed on the Earth as traveling from Washington DC to Tokyo within less than a minute. And this new speed will ultimately make Solar Parker Probe the fastest spacecraft by December 2024.

“Designing something to go fast in space is pretty much the same as you would design it to go slow in space; space has nothing to really impede its progress,” Parker Solar Probe project manager Andrew Driesman, of the Johns Hopkins University Applied Physics Laboratory, stated during a NASA press conference on August 9.

NASA TV will broadcast the live launch of Parker Solar Probe from 3:00 am EDT onwards.