This will be the first-ever controlled flight over another planet and will help NASA collect invaluable data about conditions on Mars. If the experimental flight test program succeeds, the data returned could benefit future explorations of the Red Planet by adding the aerial dimension, “Data will return to Earth a few hours following the autonomous flight,” NASA said.

Ingenuity was scheduled to fly over the Planet last Sunday but got delayed due to technical issues. The unprecedented helicopter operation is termed as highly risky by NASA as the air on Mars is thin; less than one percent of the pressure of Earth’s atmosphere. 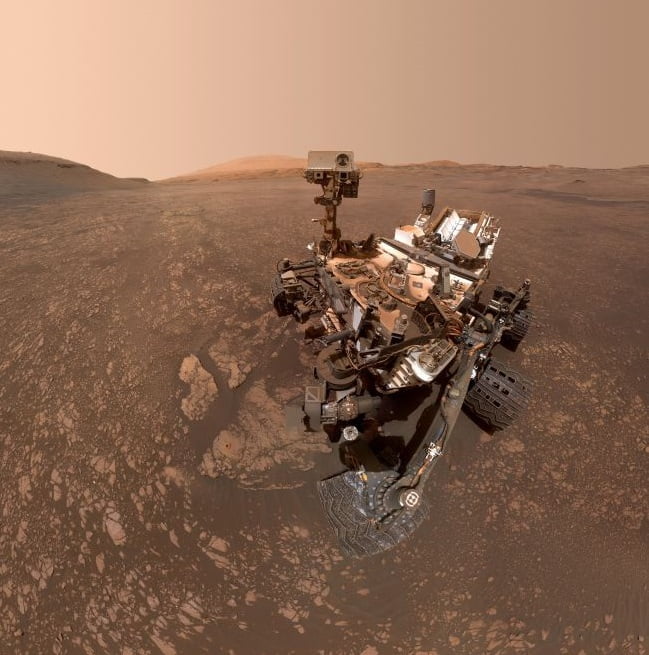 NASA’s Curiosity Mars rover took this selfie on May 12, 2019 (the 2,405th Martian day, or sol, of the mission). To the lower-left of the rover are its two recent drill holes, at targets called “Aberlady” and “Kilmarie.”Credit: NASA/JPL-Caltech/MSSS

Ingenuity was carried to Mars attached to the underside of the Perseverance rover, which touched down on February 18. Perseverance is on its own mission to finds any signs of life on the planet near a dried-up delta.

After the helicopter’s flight, Ingenuity will send Perseverance technical data on what it records, and that information will be transmitted back to Earth.

The helicopter’s maiden flight over the red Planet is being compared to the Wright brothers’ first airplane flight in 1903 in Kitty Hawk, North Carolina. And as an acknowledgment of its contribution to the advancement of aerospace and to honor that feat, a piece of fabric from that plane has been tucked inside Ingenuity.

Ingenuity is a 4-pound (1.8 Kg) machine, and its mission is an engineering one—to demonstrate rotorcraft flight in the extremely thin atmosphere of Mars. Ingenuity is designed to be light, with rotor blades that spin much faster to take advantage of the lighter gravity there, enabling more mass to be lifted at a given spin rate.

Ingenuity will attempt up to five test flights within a 30-Martian-day (31-Earth-day) demonstration window.

The first flight is to be a modest up-and-down trip, rising up to an altitude of just 10 feet. There, it will hover for up to 30 seconds and then descend. Its onboard camera will record images and the Perseverance’s cameras will also record the flight. The other four flights will last longer and reach a higher altitude.

Perseverance is scheduled to then head towards the river delta to look for hints of ancient life in the sentiments there.

Ingenuity is a smart robot and will make some of its own decisions based on parameters set by its engineers on Earth. It has a programmable thermostat that will keep it warm on Mars. It will analyze sensor data and images of the terrain to maintain its set flight path. It can autonomously self-charge with its solar panel.

It can communicate data through the Mars Helicopter Base Station on the rover.

If the flight is successful, then other advanced robotic flying vehicles will be launched as part of future robotic and human missions to Mars. These future missions could provide high-definition images and reconnaissance for robots or humans; and access to terrain that is difficult for rovers to reach. A future helicopter could even help carry light but vital payloads from one site to another.