Samsung seems to be getting geared up for Christmas and luring their audience by giving them something that they might really need. The holiday season is approaching soon, and people have already started making tight budgets in order to buy gifts for not only their families but for themselves as well. Samsung Notebook 9 seemed quite simple in the previous year. The design was standard thin-and-light, and also managed to get the main things right. Even then, the device did seem to miss showy features like a hybrid design or a high-resolution display. In early 2017, the company added a folding hinge for 2-in-1 tablet use and pen-shaped instrument, stylus. By 2018, Samsung will be giving a new face-life by introducing 4 new models.

Basics of the new Samsung Notebook 9

The laptop models are based on premium magnesium-aluminum alloy, Metal 12. This means that the devices won’t weigh more than 2.84 pounds at the most. The Notebook will be providing 16GB of system memory and 512GB of SSD storage. Apart from that, the laptops will also sport HDMI port, USB-C port, fingerprint scanner and PCI Express-based NVMe SSDs. The screen will be able to support 1920 x 1080 resolution. This can be one disappointing factor when things can get a 4k resolution. The bezel that surrounds the screens of all the models, measures about 0.244 inches thin, thus increasing the viewing area. Samsung Notebook 9 will also allow you to flip around so that you could use them in various modes. This can be said to be on the similar lines of the Lenovo’s Yoga tablets. 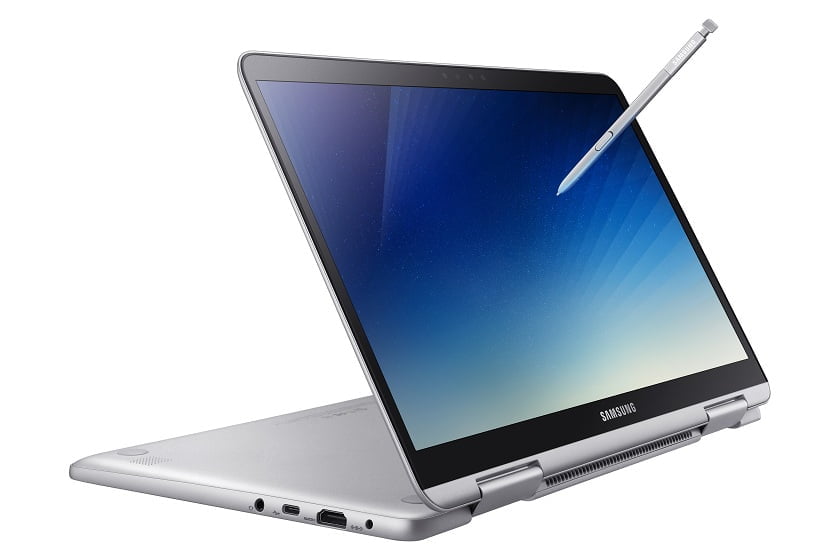 Samsung Notebook 9 will also allow you to flip around, to use them in various modes.

The new versions will be available in either size of 13.3-inches or 15-inches. All their laptops will feature fingerprint scanners and Windows Hello support, but only the 15-inch laptop will support a Thunderbolt port. The devices are said to be relying upon Intel’s eight-generation Core i7 processors along with integrated graphics. In order to provide better performance, the 15-inch models will come along GeForce MX150 graphics chip built specifically for laptops.

It seems as though Christmas came early for the gadget-geeks with this announcement from Samsung. Usually, such announcements take place at Consumer Electronics Show (CES) during January in Las Vegas. But Samsung played it safe by making it public, knowing that people might want to buy something new for the festival season.  Samsung usually promotes more of their laptops during CES, which is nothing new. As of now, it will be interesting to see how the Samsung Notebook 9 fairs in the market and whether it is able to beat the Surface and the likes of them. The prices of the same have not been announced yet.