New SpaceX Launch: Opening up a Galaxy of Possibilities

SpaceX launches the much awaited OneWeb Launch 16 Mission as the Elon Musk-owned venture extensively expands its out of the world program.

This happened to be the second launch and landing of this Falcon 9 first stage booster, which earlier launched CRS-26. It goes without saying that this latest SpaceX launch serves a massive boost to the company, which remains the largest provider of satellite-based high-speed, low-latency broadband internet around the world.

On the other hand, if we delve deeper, we would realize that this new SpaceX launch has far greater implications that go beyond the peripheries of space research and allied ventures. At a time, when Musk himself is marred by the Twitter saga, which turned worse after the Twitter mass exodus, the OneWeb Launch 16 Mission gives him a new ray of hope and SpaceX might well give him the much needed life jacket.

Let’s go ahead with our detailed discussion to figure out what’s in store and how it affects our relationship with the space and things beyond this equation. Here we go! 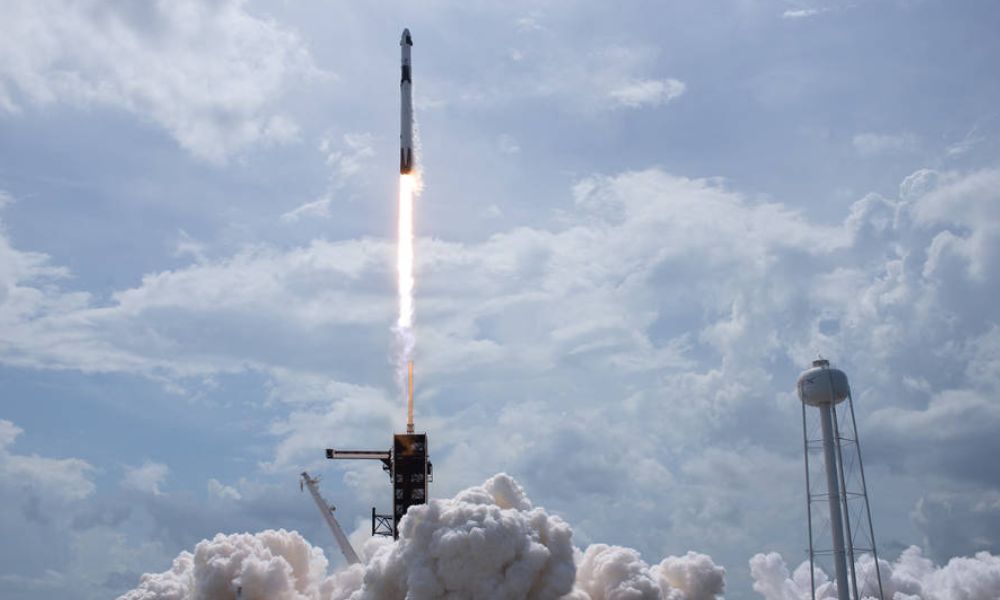 In a nutshell, it’s history in the making and the new SpaceX launch appears a major clutter-breaker in the complicated process. [Image Credit: NASA]

Though the historic OneWeb Launch 16 Mission was halted by bad weather and the new SpaceX launch got deferred by almost 24 hours, it didn’t stop it from ticking another milestone. This massive event comes after a month of the SpaceX Dragon Launch, which also helped the venture significantly.

Its unique Starlink Satellite Internet service currently enjoys more than 450,000 users, spread across the globe. For the uninitiated, the rare service can be now availed on all seven continents including Antarctica. To the utter surprise of even the staunch enthusiasts, last year, the Starlink Satellite Internet service was made available to some royal cruises, making it truly one of its kind.

Elon Musk’s SpaceX has an $2.89 billion agreement with NASA, which binds SpaceX to successfully demonstrate that Starship can actually land humans on the Moon by late 2025 as a key part of the space agency’s Artemis 3 mission. Though the company is yet to fulfill the list of regulatory requirements to bag the all-important license from the FAA, the latest SpaceX launch, OneWeb Launch 16 Mission gives it a much needed solace.

In a nutshell, it’s history in the making and the new SpaceX launch appears a major clutter-breaker in the complicated process.

OneWeb went unlucky to face a host of sanctions from Russia, as the country decided to invade Ukraine, which triggered significant changes in the world dynamics. Until a while ago, the cloud of continuous deferment and uncertainty was looming large over it. But thanks to SpaceX’s active cooperation, it has now become a reality.

SpaceX has more than 3,300 operational satellites at the moment. And the number is surging by leaps and bounds, with the latest SpaceX launch making it quite evident that soon it will have a huge fleet.

For your information, the company already has the approval to launch 12,000 Starlink spacecraft in its kitty and has sought permission to add around 30,000 more on top of them. If this bull run continues, soon SpaceX will be nowhere near anyone’s grasp.

Too Much at Stake for Musk

Firstly, Musk has to tick the boxes designed by his multi-billion contract with NASA, in two years. Secondly, his move to buy Twitter has backfired in the worst possible manner. Hence, SpaceX has to deliver. For, SpaceX and only SpaceX can save him from a possible catastrophe. It’s indeed clear that for the time being, the new SpaceX launch has managed to restore some parity for him.

How much does the Starlink Satellite Internet service cost?

In order to avail of the high-speed Starlink Satelite Internet Service, which assures strong, stable internet connectivity even if you are in a remote or rural location – literally, anywhere around the world, you have to pay $110 on a monthly basis.

However, there’s an added pocket pinch of $599 for the necessary equipment to initiate the whole Starlink Satelite Internet Service setup. Though it might sound a bit steep, it’s a one-time cost.

How many users does the Starlink Satellite Internet service enjoy at the moment?

The unique Starlink Satellite Internet service currently enjoys more than 450,000 users, spread across the globe. For the uninitiated, the rare service can be now availed on all seven continents including Antarctica.

To the utter surprise of even the staunch enthusiasts, last year, the Starlink Satellite Internet service was made available to some royal cruises, making it truly one of its kind.