Scientists from Cornell and the University of Pennsylvania have developed a robotic fish powered by ‘robot blood’ – a battery fluid. There are no solid batteries attached to the roughly 40-centimeter soft robot fish. A Dual function fluid that stores energy, helps the robotic fish manoeuvre. This new approach to powering a robot gives the artificial fish the ability to store extra energy within a short period and to operate for a longer duration without the conventional heavy and cumbersome battery packs.

Robert Shepherd, a roboticist at Cornell University in Ithaca New York said there have been attempts to create autonomous robots. Shepherd who was part of the team revealed they are seeking robots that can carry out specific tasks on their own without human interventions or guidance. The robot blood innovation is a giant step towards this goal.

Making robots autonomous for a long time is a serious challenge in robotics at the moment. Cecilia Laschi, a roboticist at Sant’Anna School of Advanced Studies–Pisa in Italy said: “Autonomous robots could have myriad applications, for example in performing search and rescue missions and in deep-sea exploration.” 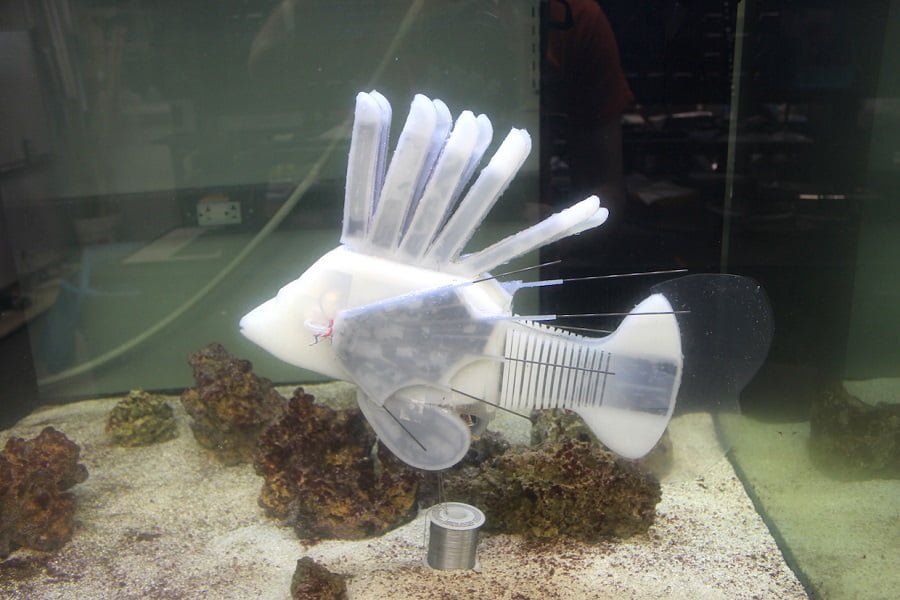 Photo: James Pikul
The robotic fish uses synthetic blood pumped through an artificial circulatory system to provide both hydraulic power for muscles and a distributed source of electrical power.

One of the greatest challenges is energy storage. A robotic fish requires enough power to perform tasks for a long time without observing a charging break. By adding batteries, the weight of the robot increases, meaning extra power is required for the robot to move.

In resolving this challenge, the engineers came up with a fine idea after some research. The idea was to modify fluid (in the form of hydraulics) which already powers some robots to carry energy, just as the human blood powers the muscles.

The idea resulted in the creation of a robot fish that makes use of a rudimentary vasculature and “blood” to energize itself and also hydraulically power its fins. The slow movement noticed in the fish is because the technology is still at its development stage. The robotic fish could only cover one and a half body lengths per minute and the fish could get eaten if it were in the ocean, said Shepherd.

Considering that Shepherd and his research team can increase the surface area of the anodes and cathodes to improve power density. The speed of the robot is expected to increase with time. However, the technology will lead the revolution from the use of clunky batteries and wires.

Compared to machines that have a separate battery and hydraulic-fluid system, this technology will increase the amount of energy stored in robots by 325%, says Shepherd. And the robot would function for 37 hours on a single charge.

The advanced state of lithium-ion technology reveals some significant limitations that come with this system.  “The power density is about 30 to 150 times less in what they’re showing compared to what a lithium-ion battery can do,” says MIT CSAIL roboticist Robert Katzschmann, whose own robot fish uses a traditional lithium ion. When compared to this new fish robot, Katzschmann’s robot can move 20 times faster.

BIKI the Robotic Fish: The Wireless Photography Drone takes you to the Deep Sea