The Nikon Z5 is the junior version of the Nikon Z6. The new model is a 24.3MP full-frame mirrorless camera that supports Nikon’s Z series lenses. It also has the image stabilization system, the 273-point hybrid AF system, and 3.69-million dot electronic view-finders similar to the Nikon Z model.

The Nikon Z5 is a perfect camera for beginners and still photographers. It has the Nikkor Z 24-50mm f/4-6.3 kit lens – the ‘shortest and lightest full-frame mirrorless zoom lens.’ Nikon stated that it would sell the Nikon Z5 only with this kit lens, rather than selling it in a body-only option; though the full-body option is open for a future possibility. The Nikon Z5 is perfect for photographers and people who love traveling light. 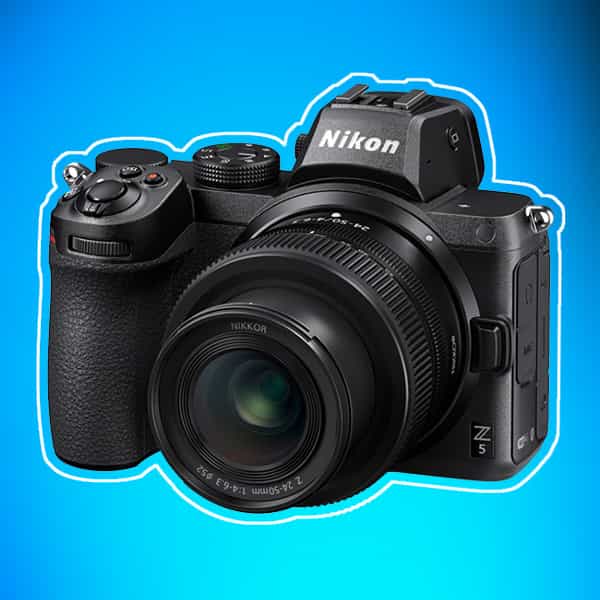 Unlike the Nikon Z6 and Z7 models, the Z5 consists of two card slots (with both supporting UHS-II SD format), rather than a single XQD slot. The camera can be powered by USB, which comes handy if a photographer likes shooting long time-lapse photos. However, in comparison to its senior siblings, the Z5 lacks in two prime areas- one is the video with the Z5’s 4K video comes in only a 1.7x crop, and secondly, the camera lacks a 120p slow-mo mode. The new camera is also inferior to both the models in terms of burst shooting. While the Nikon Z6 can capture extreme action or wildlife scenes at up to 12fps, the Z5 can capture a maximum of only 4.5fps.

The Nikon Z5 is a good beginner camera for people with a passion for photography. The camera has a magnesium alloy body equipped with weather-sealing, an autofocus system with both Eye-Detection and Animal-Detection AF, and a tilting touch-screen. The Z5 also looks promisingly compact for a full-frame zoom, due to its retractable design. This means the user will have to rotate the zoom ring to extend it out and start capturing. However, Nikon states that the ‘smallest’ lens has a decent close-focusing distance of 35cm and also offers near-silent focusing for capturing video footage. The camera giant also stated that it would be promoting the Nikon Z system lens collection by the end of 2020 with the Nikkor Z 14-24 f/2.8S, which will complete the’ trinity’ of zoom lenses along with the 70-200mm f/2.8 and 24-70mm f/2.8 lens.