Giant sandworms and new planets are the latest additions to the No Man’s Sky in the Origins update. These enhancements will surely make the game bigger and better than it already is. Developer Hello Games stated that the Origin is looking forward to “effectively doubling the variety in the game”. The No Man’s Sky launch date hasn’t been revealed yet.

The No Man’s Sky game features a procedurally-generated universe. This means that a random number algorithm creates everything that the player finds in the game instead of manually. This also means that no planet the player is similar to the other. Sean Murray, the founder of Hello Games, told players that there are around “18 quintillion planets,” and it would take the players 585 billion years to witness them all. The new No Man’s Sky ps4 update also brings in new planets, diverse weather conditions, different planet types, new creatures, and flora and fauna.

The trailer of the game features new creatures and insects that land and take flight. All the recent changes are entirely different and weird when compared to the ones in the earlier rounds. Players would also see the glorious Dune-Esque sandworm wriggling out of the ground at the end of the trailer video. 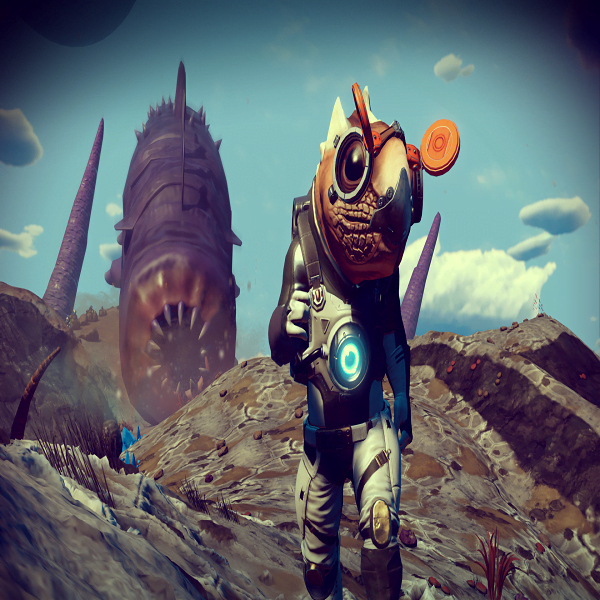 No Man’s Sky is sure to fancy the gamers with its fascinating Origins update including sandworms and more.

The weather scenario of the game is also upgraded. Earlier, planets that experience bad weather like acid rain witness the situation planet-wide. The only way to avoid that situation was to hide in the ship or leave the atmosphere.

The original update was to add more realistic localized weather to specific areas that won’t cover the entire planet. However, in the new update, the weather will now move across the planet, and there would be more new weather variants like the occurrence of tornadoes and meteor showers. The meteor showers will see a flurry of valuable minerals to the planet, which the players will have to collect, though they might die on the way.

The trailer also features new structures that would pop up on the planet, luring the players to explore them. The alien buildings will have hidden interesting lore and treasure artifacts that might lead the players to even more bizarre formations. That would be quite a gaming scenario!

Several other quality of life changes in the new game and bug fixes are introduced in Origins. The spectacular update is, however, the giant sandworms. These giant worms were earlier features in one of the origins No Man’s Sky most initial trailers highlighted around seven years back. No Man’s Sky game earlier faced severe backlash when it was No Man’s Sky beyond release date in 2016 as the people felt like much of the promotional content around the game was misleading.

The early trailers showcased giant, monstrous, weird, and captivating creatures, like giant sandworms, which were supposed to feature in the No Man’s Sky launch game. However, on its launch, people complained that the game felt empty, and the finished product was nothing like advertised in the trailer. On this note, Murray stated: “We have earlier definitely messed up a huge bunch of communication. I am not much of a communicator. Initially, I was not too fond of it when I had to say it. I was just naive and overly excited about my game then”.

Another most significant controversy around the game was the multiplayer feature. When enquired about this, Murray stated that even if the players were trying to find their friends, there’s no way they can co-ordinate and meet up because of how vast the universe is. Also, every time the player starts a new game, they would be placed on a new random planet in a random galaxy wherefrom it would be hard to find friends you don’t know are located where. However, the multiplayer option was introduced where players can join the same game world as their friends to explore together.

The new No Man’s Sky update would surely win the hearts of the gamers and a good addition in a long line of free patches coming to No Man’s Sky game.