NVIDIA today, finally, took the curtains off from Volta – its next generation GPU technology. Volta GPU is created to bring on high-performance computing and next era of AI technology.

At GPU Technology Conference, the company also made an announcement about the NVIDIA Tesla V100 data center GPU – its first Volta-based processor. The processor is likely to bring high-end scalability and speed for AI advancement as well as for increasing the growth of HPC and graphics loads.

The CEO and founder of NVIDIA, Jensen Huang said that artificial intelligence is a wave that is driving the greatest technology advances in the human history. It will automate the intelligence and would spur a wave of the unmatched social progress from the time of industrial revolution, added Huang.

The NVIDIA’s seventh generation GPU technology, Volta, is built with 21 billion transistors and delivers performance equivalent to 100 CPUs for deep learning. The new GPU architecture provides 5x improvements over the current generation GPU architecture, Pascal. It provides teraflops at par with Pascal and 15x over Maxwell. This performance of the seventh generation Volta GPU surpasses four times the improvements that we would get from Moore’s law. 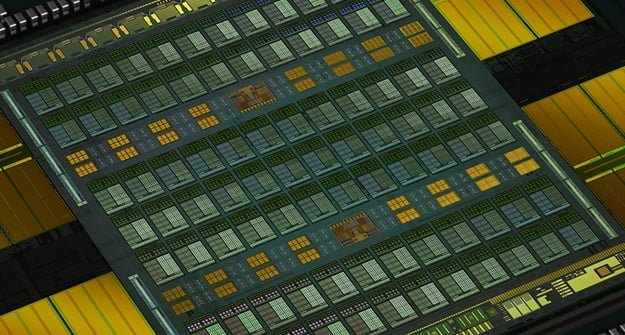 The Volta-based deep learning machine is very much similar to its predecessor – powerful, compact and specifically built to train AI. However, it is just that the new DGX-1V is a lot more powerful. It has the power to replace 400 servers and capability to complete a week’s work of computation in one shift. It is because it has 8 new Tesla V100 chips which lend 960 teraflops of power over 40,960 CUDA cores.

Data scientists, developers, and researchers mostly rely on neural networks to power their next advances. So, the demand for the acceleration in AI is not at scale here. Battling cancers, self-driving vehicles and more gets sufficient power from neural networks. But as the network becomes complex, data centers need to exponentially deliver high processing power. So, they need to efficiently scale and support rapid adoption of high-power AI services such virtual assistants and recommendation systems.

Volta GPU will bring more power to high-performance computing. The new standard offers a platform to advance in both computational and data science. The pairing of CUDA cores and the Volta Tensor Core can replace hundreds of processors for traditional HPC. Volta will enable the industry to realize the life-changing potential of Artificial Intelligence. The powerhouse is available now at $149,000.

Best Laptops for Gaming and Schoolwork: Top Options in the Market Today