NVIDIA unveiled the first of its next-gen GPUs based on Ampere architecture namely, the GeForce Nvidia RTX 3070, GeForce RTX 3080, and GeForce RTX 3090.

Nvidia recently unveiled the first of its next-generation GPUs titled the ‘GeForce RTX 30 series‘. The company promises these to be the greatest ever generational performance leap in gaming GPUs in the company’s history. The new GPUs- the GeForce Nvidia RTX 3070, GeForce RTX 3080, and GeForce RTX 3090 are based on the new Ampere architecture and introduce Nvidia’s second-gen RTX ray-tracing cores, GDDR6X memory, and a faster AI processing. The company will sell its Founders Edition graphics cards. At the same time, its partners, including Asus, Gigabyte, Zotac, MSI, Galax, Palit, PNY, EVGA, Gainward, and Innovision 3D, will bring out offer custom-designed cards having its customized coolers and software enhancements. The new flagship product is the GeForce RTX 3090, or the “ferocious GPU,” as it is termed. This product has a triple-slot cooler in a new dual-axial airflow design with one fan fitted at the front and another on the rear. According to Nvidia, this design makes the product 10x quieter and up to 30 degrees C cooler. It will consist of 24GB of GDDR6X RAM and 50 % faster than the current Titan RTX. Gamers will experience 8K game visuals at 60fps speeds, though this GPU is targeted more for AI developers and massive-scale content creators. The cards will go on sale in October. 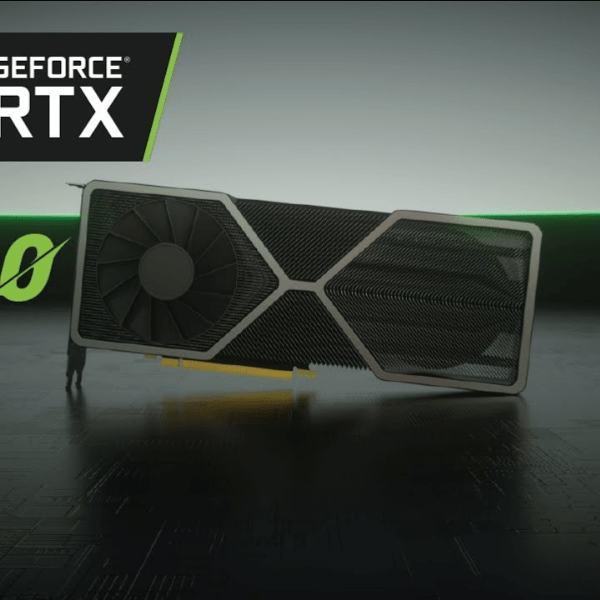 Nvidia also disclosed details of a new 12-pin PCIe power connector recently that would be in use for new GeForce RTX 3070 series graphics cards. There will be an adapter with each card. These GPUs are also the first of its kind to support hardware AV1 decode that would help in conserving bandwidth for streamers, and an HDMI 2.1 that would support 8K displays. There is a new RTX IO framework that works with PCIe 4.0 and fast SSDs to load games and assets directly from the storage load. The GPUs are fabricated on a custom 8nm process.

When it comes to software, Nvidia introduces the Reflex, which will allow game enthusiasts to integrate a “Reflex Mode” into the games they are playing. This will optimize and measure PC latency to help gamers lock their target and track opponents. The games that would support this feature are Apex Legends, CoD: Warzone, Fortnite, and Valorant. Hardware OEMs, including Asus, Acer, Alienware, and MSI, will also launch the 360Hz G-Sync eSports monitors soon, with built-in latency analyzers. The Nvidia Broadcast is directed for streamers and includes AI-powered noise reduction feature, background blurring or removal, and auto framing.

The Nvidia RTX 3080 graphics card was released at 9AM ET, on 17th Sept, and displeasure began only seconds later. All chief online stores in the US are sold out, and there have been reports of brick-and-mortar stores each having as few as 10 units for sale. The end result: eBay scalpers are now demanding to cash in, and precise few people who hunger to enjoy the graphics card seem to have truly gotten their hands on a confirmed order.

The card is being listed on eBay for several hundreds of dollars — in roughly cases, even thousands of dollars — over its $699 sticker price. And PC gaming enthusiasts are mad, claiming that Nvidia held a messy launch just a day after US retailers likewise botched early preorders for Sony’s upcoming PlayStation 5.

A list here of filtered eBay listings displays various RTX 3080 cards selling for between $1,000 and as much as $2,500. Many of these are “buy-it-now” listings, and it’s not clear if the accounts are essentially in possession of a card from a physical retailer or the authorization of an online order shipping soon, so it’s tough to express which listings are legitimate. But it’s clear there’s an unequal gold rush forming around the RTX 3080 just hours after it went on sale.

Last month, Nvidia’s RTX 3080 steered in the next generation of 4K gaming with an inspiring leap in performance over the 2080 model it replaced. While Nvidia’s flagship card was designed to push 4K, the $499 RTX 3070 is $200 less costly and still aptitudes big performance gains over the previous-generation RTX 2080 and even the RTX 2080 Ti. Like all of Nvidia’s RTX cards before it, the RTX 3070 can also take benefit of ray tracing and Nvidia’s AI-powered DLSS technology to increase frame rates and still uphold prodigious image quality.

This blend of performance and price puts the RTX 3070 in the idyllic sweet spot for 1440p gaming. The vast mainstream of PC gamers are still using 1080p displays, and the RTX 3070 offers up an upgrade path to 1440p without the precipitous cost of an RTX 3080 and the extra power draw.

I’ve expended the past week testing out the RTX 3070 at both 1440p and 4K ahead of its October 29th debut, and it’s impartial to say this card will spring you a lot of headroom for games coming in 2021 and beyond so long as you’re playing at 1440p or below. If you’re seeing the move to 1440p, the RTX 3070 is the further budget-friendly option if you hunger to futureproof along the way.

Nvidia made some big changes to the cooling on the Founder’s Edition RTX 3080, but it’s preserved a traditional dual-fan setup with the RTX 3070. The dual-axial fans work in pushbike to retain the card cool, with the right fan pushing air all the way through the card’s cloak to the reverse side, while the left straight cools the GPU cores with air that can drain out the rear of your chassis.

During our testing, we hardly heard the fans spin up, even with the card hitting temperatures of 75 degrees Celsius. While the RTX 3070 doesn’t value from the same push-pull system found on the RTX 3080, it does pick up some of the other hardware advances found on the flagship.

The hardware design on the RTX 3070 is actual alike, allowing Nvidia to use a dense PCB that’s a lot smaller to progress airflow throughout the card. And just like the RTX 3080, Nvidia is using its new 12-pin single power connector, as opposite to the separate 6- and 8-pin or twin 8-pin connectors on prior cards.

Nvidia has included its own adapter inside the box. Since the RTX 3070 only needs a single 8-pin power connector, it brands the adapter a slight less wieldy than the one found on the RTX 3080. Still, I would greatly recommend picking up a direct 12-pin connector from your PSU manufacturer rather of using the dreadful adapter.

The RTX 3070 also includes a single HDMI 2.1 port and three DisplayPort 1.4a ports. Much like the RTX 3080, Nvidia has fallen the USB-C VirtualLink port found on the RTX 2080, which never saw any actual adoption for VR. While the RTX 3080 has pure white LEDs around the fan and to light up the GeForce RTX branding, the RTX 3070 ditches this for a humble look without any lighting.

For great refresh rate monitors, in specific, Nvidia’s DLSS technology truly feels like a fairylike switch to show off just how far you can push this card. Nvidia’s DLSS technology uses neural networks and AI supercomputers to examine games and sharpen or clean up images at lower resolutions. DLSS permits a game to render at a lower resolution and use Nvidia’s image reconstruction technique to chic the image and style it look as decent as native 4K or better.

Most games that gadget DLSS permit you to pick between performance and superiority modes, and in Fortnite, We tested both. We were capable to get a 215fps average with the performance DLSS mode enabled, and a 172fps average when we favored excellence. It’s tough to warning the influence on image quality in the performance mode, and the quality mode aspects the same if not better. We are still astonished at how well DLSS works.

Even without DLSS, challenging titles like Control still hit 95fps with maxed-out settings, and Metro Exodus managed to hit 30fps with the highest-level settings enabled. The RTX 3080 felt like an actual contented option for 1440p and may have more staying power, but the RTX 3070 is so close behind that you could bounce it and save $200 at this resolution.

Best RTX 3080 Laptops To Get Your Money’s Worth