Occipital’s Bridge Headset: The Most Powerful VR Headset for iPhone

There are a dime a dozen VR headsets in the market which are compatible with the iPhone. But you’re out of luck if you’re looking for a powerful, high-end VR headset for iPhone. Because Apple doesn’t have its very own AR/VR headset, Gear VR and Google Cardboard has been the make-do headset since its launch. With Occipital’s Bridge headset, it looks like the long-awaited VR headset for iPhone has finally arrived!

The Occipital Bridge headset is the most powerful phone-driven VR headset in the market. What makes it different from other VR headsets in the market is that it’s made exclusively for the iPhone. The Bridge headset comes from the same company that created the Occipital Structure Sensor, an iPhone and iPad add-on which uses infrared to scan objects and gauge distances automatically.

Positional tracking in VR is what actually makes higher-end devices like the HTC Vive, Oculus Rift, and PlayStation VR fundamentally different devices compared to phone-based headsets like Daydream View and Gear VR. With inside-out positional tracking, one can roam around inside a virtual world, vertically and laterally.

Thanks to the built-in sensors, the Bridge headset for iPhone is powerful and accurate enough to create detailed 3D maps of your surroundings. In fact, the Occipital Structure Sensor, is one of the main components of the Bridge headset. It’s embedded onto the front of it, mapping all your surroundings and making it possible to create an ‘inside-out positional tracking’. The sensor can also sense and create depth maps of objects. Because the sensor has its own rechargeable battery that runs three to four hours per charge, it won’t drain your battery quickly. 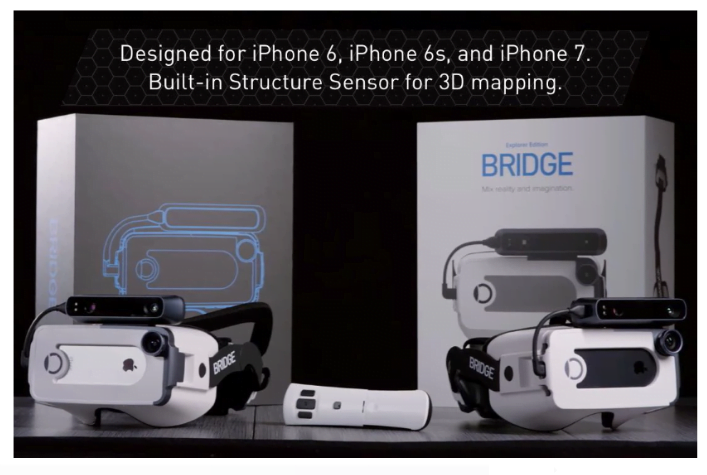 While a lot of AR/VR headset makers focus on creating headsets which are lighter and softer, the Bridge seems to be on the unconventional side. The Bridge headset for iPhone looks bulky and intimidating, even though it’s made of plastic.

This VR headset for iPhone is embedded with 120-degree wide-angle lens attachment and has a top-mounted structure unit. The headset can map your virtual surroundings within a minute of you putting them on.

Now, here comes the most interesting part: Occipital has created a little robot pal called Bridget (It’s kind of like Microsoft’s Clippy). Bridget can play fetch with your surroundings. It can also create ‘portals’, to let you visit computer-generated worlds. 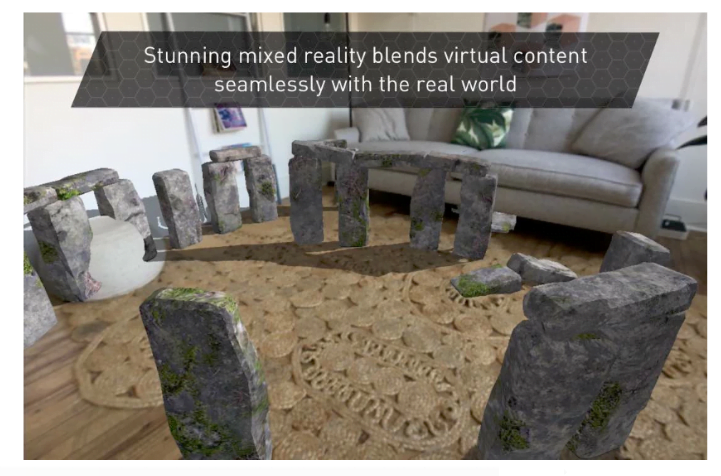 As WIRED put it, perhaps, Bridget’s long-term success depends on the world of third-party developers. According to Occipital, Bridget works with existing iOS VR apps and videos. Additionally, developers can use a Unity plugin and the existing Bridge SDK to create new surroundings and experiences.

The Occipital Bridge headset works only with the iPhone 6, 6S, and 7. It does not support Plus-sized models. Moreover, this VR headset for iPhone yields a low-resolution experience of 640×480 per eye.

The Bridge headset for iPhone is quite inexpensive, compared to other high-end phone-driven VR headsets in the market. A developer-centric Explorer Edition is priced at $500, while the consumer-oriented model retails at $400.

Shipping for the developer-centric Explorer Edition begins this month, while the consumer-oriented model will come out in March 2017.