Facebook will reportedly launch the standalone VR (virtual reality) headset, Oculus Go during its annual developer conference, f8 scheduled on May 1st in San Jose, CA. Oculus Go has a single setup hardware and is worth $199. It is intentionally positioned to fill the void between Oculus Rift & Samsung Gear VR and to attract people towards artistic virtual reality.

The VR technology pioneer, Oculus announced its first standalone headset during Oculus Connect 4, held in October 2017. Subsequently, at the CES this year, Hugo Barra, Oculus Head (and an ex-employee of Xiaomi) mentioned about its partnership with Xiaomi and Qualcomm Technologies. The first affiliation is for hardware development and the later one for building power efficiency. The move is targeted to design the advanced generation of VR products at easy to buy prices and reach people worldwide.

Ahead of the rumored release date, Facebook presented the Go VR headset demo at Game Developers’ Room (GDR), the largest professional game industry event on March 19th. The gamers had an on-hand experience and here are all the details about Oculus Go. 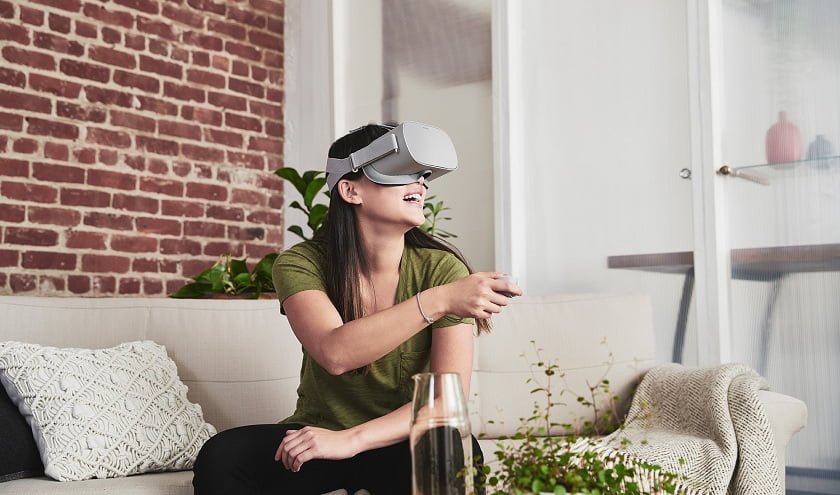 Oculus Go comprises of a headgear and a controller which makes up the complete VR setup.

Oculus Go has an easy setup combined with an effortless bootup. The standalone VR headset means it won’t require a smartphone or an expensive gaming PC with tangled wires for the setup. Another joyful feature of the gadget is that there is no need to download compulsory apps. Just push the power button and we are ready to play over 1000 VR games or watch movies/TV shows or hang-out with friends on the social apps in the imagination world.

Oculus Go comprises of a headgear along with a controller which makes up the complete VR setup. The headset is comfortable on the head as it is designed with a breathable fabric and three adjustable straps. And it can be worn on the glasses too!

The controller circumference is small enough to fit in the palm, with a trigger placed at the back, and a touch-sensitive thumb pad and two buttons on the top.

The vision is sharp with crystal-clear optics and the integrated spatial audio amplifies surround 360 VR experience. The optimized 3D graphics binds together to bring your virtual world to life.

Oculus Go is powered by Qualcomm’s Snapdragon 821. The headset runs at either 60 frames/second (fps) or 72 fps, generating greater smoothness to developers that want to take advantage of the feature.

In a nutshell, the headset is portable and the experience is personal.

Adding to Instagram and WhatsApp, Facebook acquired Oculus in $2 billion in 2014 keeping its individual identity intact. Mark Zuckerberg believes virtual reality is an incredible platform for communication that adds a personal touch to one’s virtual interaction with everyday objects around them. This platform has potential beyond mere gaming. Zuckerberg desires to make virtual reality as ubiquitous as smartphones and laptops.

Oculus will design a product similar to Oculus Go exclusively for the Chinese market. There is also a standalone gadget prototype in the line-up temporary titled as Santa Cruz. The other players in the standalone VR headsets are Google and HTC who also enjoy a significant market presence.