Oculus Quest is equipped with greater features than Oculus Rift and standalone property of Oculus Go. The comprehensive headset is slated to release in spring 2019 and will be available for $399.

“This is the VR experience everyone’s been waiting for,” said Mark Zuckerberg, Facebook CEO, at the Oculus event started on September 26, 2018, in California. “With the introduction of Oculus Quest, we’ve completed our first generation of best-in-class VR headsets.”

The Facebook CEO reiterated that he wants to reimagine further possibilities in the virtual space and get at least one billion people on VR.

When Zuckerberg says Oculus Quest is the “first all-in-one VR gaming system”, he means the device doesn’t need the support of PC, wires, external sensors or other tethers to get into action mode. Oculus Quest can play both mobile games and desktop VR games.

In comparison, Oculus Go, the $200 VR headset that released earlier this year, is also a standalone gadget but it supports only mobile gaming.

Zuckerberg, however, explicitly mentioned that Rift still sits on the top of its VR headsets series, cited PC World. The gadget delivers “cutting-edge experience” because of GeForce RTX 2080 Ti configured inside but boots up with PC connection.

The credit for portability factor in Oculus Quest goes to Oculus Insight technology. Oculus Insight system utilizes four wide-angle inbuilt sensors and cameras located on the edges of the visor. With the help of these virtual eyes, the wearable device powers inside-out tracking, Touch controller tracking, and Guardian. 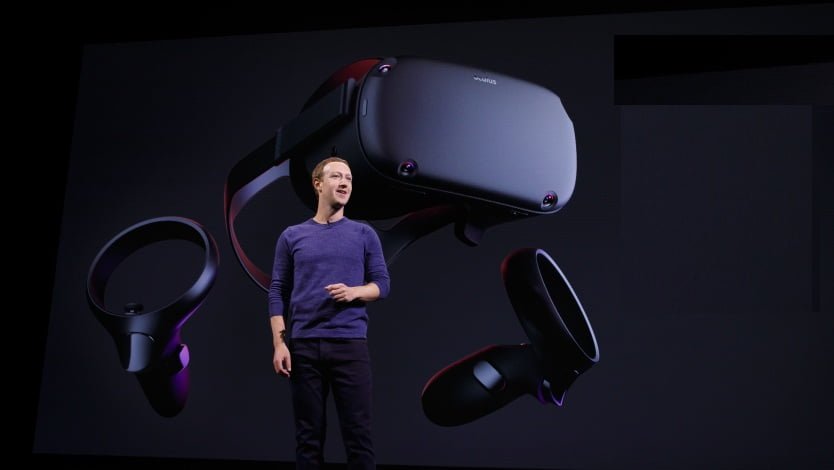 The comprehensive headset is slated to release in spring 2019 and will be available for $399. Source: Facebook

The technology enables to track the real-time position of the wearers and hence allows them to walk in the most natural manner. In fact, the VR Company claimed that Oculus Quest has “the ability to go beyond room-scale” with Guardian support. The headset can even store the maps of the rooms after the player leaves.

The latest VR headset from Oculus can store up to 64GB of games. At the time of launch, Quest will pack up 50 titles including popular Rift games like Robo Recall, The Climb, and Moss.

Further, ILMxLAB, Lucasfilm’s entertainment division, has partnered with Oculus and will release an untold story from the Star Wars series with the debut of Quest next spring. The team will preview the first of three episodes of Vader Immortal: A Star Wars VR Series.

“Our friends at Oculus share ILMxLAB’s ambition to bring compelling immersive narratives to life, and using Oculus’ hardware, we will invite fans to experience Darth Vader as never before,” said Vicki Dobbs Beck, Executive-in-Charge at ILMxLAB.

Michael Abrash, Oculus CEO, meanwhile predicted deeper technologies on VR headsets. He visualizes these gadgets with lenses fractionally thicker than glasses and displaying pictures as wide as one needs.