Unleash the power in style as OnePlus brings out the ace from its sleeve with the new OnePlus 10 Pro.

OnePlus 10 Pro review, right? Yes, here it is. Of late, there has been a massive surge around the new OnePlus 10 Pro. People are searching in numbers about the latest Android flagship from OnePlus. If we have a look at the virtual world, we will be shocked to find that it’s almost everywhere.

Right from the popular social media channels to the leading tech community forums, people simply can’t hide their excitement. The ecstasy of having this high-end smartphone from the Shenzhen-headquartered company, is quite evident from their overwhelming posts.

The year is about to end and if we shift our focus to the gross sales report of Android smartphones this year, we would be amazed to find the OnePlus 10 Pro 5G among the toppers. It’s all the more surprising because of the fact that the year was marked by the arrival of a host of top-notch smartphones.

On one hand, we saw Apple coming up with its new iPhone 14 lineup during the Apple Event 2022. On the other hand, Samsung came out with its Galaxy S22 Ultra, dipped in elegance and gorgeous beauty along with the next-gen smart tools. We also witnessed the stylish entry of the Vivo V25 Pro with a gem of a camera setup.

Therefore, it speaks volumes about the sheer quality of the OnePlus 10 Pro 5G, which managed to strike a chord with the smartphone freaks across the world, despite such stiff competition. Setting the global smartphone market on fire while fighting it out with the mavericks of the game, is indeed a praiseworthy feat.

The year has been too kind to OnePlus, which stormed the market lately with its Nord Watch. Now, let’s delve deeper with the new OnePlus 10 Pro. 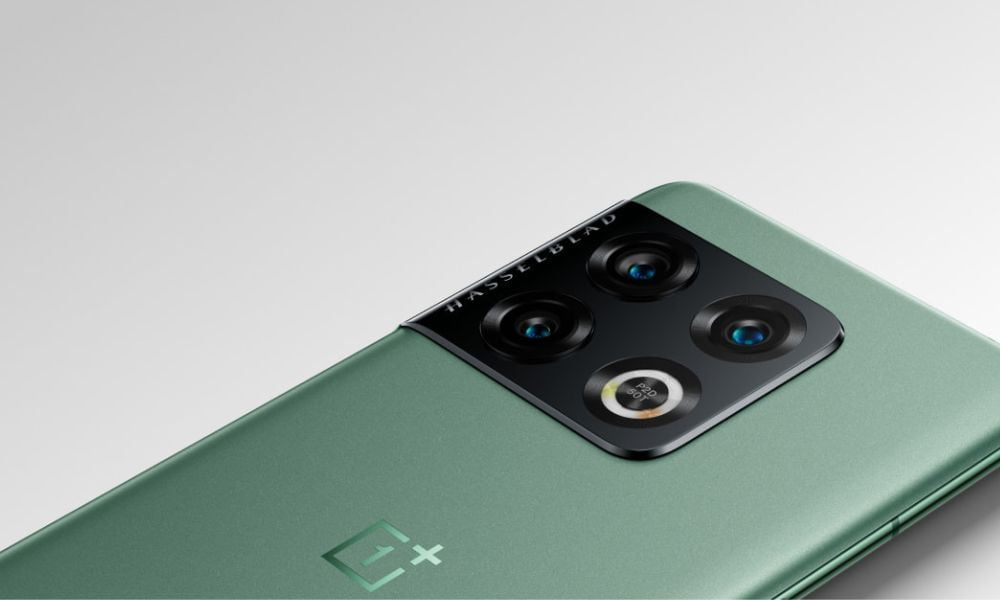 OnePlus claims that with the new OnePlus 10 Pro, you can have ‘A day’s power in 15 minutes’. [Image Credit: OnePlus]

The clearly standout OnePlus 10 Pro features are allowing the high-end Android smartphone from OnePlus, to enjoy a bull run for so long. There’s clearly no sign of the OnePlus 10 Pro 5G juggernaut coming to an end anytime soon. Here’s an overview of its important features.

Display: The new OnePlus 10 Pro comprises a 1440p LTPO OLED panel which has gentle curves on the long edges. Along with it, there’s a 20:9 aspect ratio that is marginally taller in comparison with the S22 Plus and Pixel 6 Pro’s displays. You will be getting the double protection of a Gorilla Glass Victus on the front and a Gorilla Glass 5 on the back panel.

Performance: You don’t need to worry a bit about the performance as it is 1400°C Heat-tested, goes on for 60+ hours, comes with 8.5 Mohs hardness and 30% higher wear-resistance than the previous model.

Battery & Charging: This gem of a device is packed with 80W SUPERVOOC, 50W AIRVOOC and the Shenzhen-headquartered company’s largest ever battery (5,000 mAh), fair enough to empower your digital life. OnePlus claims that with the new OnePlus 10 Pro, you can have ‘A day’s power in 15 minutes’.

Do you want to look for some even cheaper substitutes? Don’t worry, we have got you covered, as always. Here are some quality options that won’t burn your pocket.

Firstly, you can go for Asus, if you are fond of playing games. There are some really good alternatives in the form of the top mid-range ASUS mobiles. You can choose between the ASUS Rog Phone 2, the ASUS Zenfone 5Z and the ASUS Rog Phone 3.

Then, there are another two great value for money options – Samsung Galaxy A53 and Google Pixel 6a. Undoubtedly, these are probably the best budget Android phones at the moment. Interestingly, both of them come with a great camera setup and if you are into photography, then don’t look anywhere else.

There’s also a hidden gem – Sony Xperia 5 IV. The company which mesmerizes us with its Sony Bravia, has brought out a fascinating camera phone. For the uninitiated, the ones who pre-ordered the all-new best camera phone from Sony, became eligible to bag home a WF-1000XM4 wireless earbuds, worth $280.

You can also go for the Nothing Smartphones. Though it’s a relatively new company in the domain of smartphones, it has won millions of hearts across the world with its first ever Android device. The brand has also garnered widespread popularity among the tech savvy people courtesy of its freshly minted Nothing Ear Stick. Incidentally, the pair of wireless earbuds seems to surpass its predecessor Nothing Ear 1 in many ways, including overall design and polish.

Battle for the Bragging Rights

When it comes to claiming the pole position in the global high-end smartphone market, the stakes are way too high. In general, Apple is still far ahead than others, as the Cupertino-based tech-giant continues to add more value to the lives of its users than only highlighting the device’s features.

Pretty recently, the much awaited Emergency SOS via Satelite became live. It’s much more than an advanced feature as it’s turning out to be capable of saving lives. Hence, there’s still no match for Apple which is only widening the gap with its rivals as iPhone continues to grow manifold with the passage of time.

The only chink in the armour for Apple was the iPhone Battery Health issue, which has been found to be eligible of being addressed properly through some small change in habits regarding usage, primarily related to charging. Meanwhile, you can check our guide to take care of your iPhone Battery Health, if you possess one. Moreover, Apple enjoys a huge edge over its competitors thanks to the fact that ‘iPhone has gone to film schools’.

However, Samsung is constantly pushing its boundaries and its Galaxy S22 Ultra has been selling like hot cakes across the globe. The new flagship from the Suwon-headquartered company doesn’t only come with a striking in-built S Pen (might remind one of the Apple Pencil which blends perfectly with the iPads) but also has a unique Nightography tool. Its supreme camera setup makes it stand on a different pedestal altogether.

This year, we had a new entrant in the club as the Nothing smartphones announced their debut in a thumping manner. The OnePlus 10 Pro vies for the top spot with all of them and it would be extremely significant when the OnePlus 11 arrives next year.

Shall I Buy the New OnePlus 10 Pro?

For the uninitiated, the next Android flagship from OnePlus, the much-awaited OnePlus 11, which would be a giant leap over its predecessors, might well be unveiled in December itself. In all likelihood, it would be up for grabs in China by as early as January and in the US by March.

Therefore, if you wish you can wait for the OnePlus 11 to arrive instead of rushing for the OnePlus 10 Pro 5G. But it’s at least three months away and the wait could be even longer. Also, be rest assured that it will come with a price-tag way higher than the OnePlus 10 Pro price, which is $899. Interestingly, it costs quite less than the 9 Pro, which had a pocket-pinch of $1,069.

One thing we must highlight in this OnePlus 10 Pro review, that there are certain pain points, which must be noted before jumping the gun. Firstly, the camera setup on offer fails to catch up with the leaders of the Android flagship domain. Secondly, apart from the T-Mobile carrier phone, the unlocked versions don’t contain an IP Rating, which is big no-no. For the newbies, it means that the company doesn’t guarantee any assured protection against splashes of water or a brush of dust. Lastly, it is going to provide you only four years of security updates, which is indeed an Achilles’ heel for a flagship Android smartphone, for which you have to shell out so much money.

Hence, kindly consider all aspects and tally them with your own set of priorities before locking on this high-end Android device. Having said that, we must admit in this OnePlus 10 Pro review that it’s one of the best flagship Android smartphones available at the moment and can surely give others a serious run for money.

You can order the OnePlus 10 Pro 5G from the official website of OnePlus itself or you can buy it from the leading ecommerce sites like Amazon or Best Buy.