The Orah 4i is a small and easy to use 4K camera rig developed by a company called VideoStitch, which makes 360-degree video stitching software for those aforementioned rigs. Priced at $3,595, it’s a camera for professional streamers.

The streaming kit consists of two parts: a little camera about the size of a tiny DSLR, and a base unit that does all the stitching and the processing for live VR streaming. 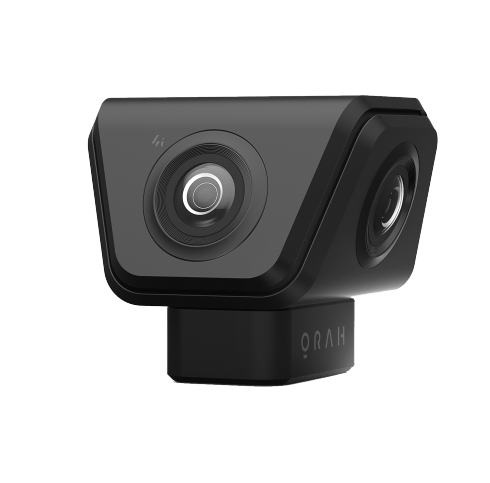 The little camera measures around 3.1 by 2.7 by 2.5 inches and weighs 17 ounces. It features four f2.0 fish-eye lenses capable of taking high-quality footage, and Sony EXMORE image sensors tightly condensed in a small anodized “precipitation-hardened” aluminum gray metal body, with a tripod mount at the bottom. Each lens is stabilized, while the four microphones help capture ambisonic 3D sound for recording 360-degree audio, which makes it easy to map sound to whatever direction the user is viewing the video.

In addition, the camera is also designed to be thermally efficient to combat overheating issues that some of the multi-camera rigs show in the market. It also needs a single unit of cable to connect to the live streaming rig. All processing components (Nvidia GPU, an Intel CPU, and a 120 GB SSD, four USB 3.0 and two USB 2.o ports, dual Gigabit LAN, WiFi 802.11 ac/b/g/n and Bluetooth 4.0) has been placed in a “stitching box,” which the Orah 4i connects to through an Ethernet cable. The cable then transmits data and provides power to the camera. The stitching box needs to be plugged in for the rig to work. Users can even plug the stitching box to a small battery if they want the whole unit to be completely mobile.

VideoStitch says it has made a camera rig that is simple to use and easy to operate compared to any of the rigs available in the VR market.

The Orag 4i’s camera quality is impressive, especially when you compare it to the average consumer camera. While it’s nearly not as unreasonably expensive as the GoPRo rig (which comes with multiple cables) or the JauntVR Camera, it at least, brings a ray of hope professionals vying to bring VR live streaming to the general masses.

Gadgets for the globetrotter

LookSee, a Smart Bracelet that Lets You Customize Imagery