Remember those craft classes in school where our teacher taught us to make birds and boats out of paper? This form of Japanese art had an interesting name, Origami. As we grew older, the scope of making things from paper through this technique kept increasing. More complicated forms of this art were introduced to us which were used to flaunt our skills. Little trinkets made from origami would be hanging on the balcony as a result of our mothers’ admiration. Who would have thought that this colorful childhood memory would turn into a technological breakthrough? Recently, a research institute excelling in robotics came up with a modular origami robot.

The concept of origami is being inculcated by scientists into robotics in order to create a piece of technology which is compact yet efficient. Scientists have borrowed this Japanese skill to send robots into our stomachs and even on Mars. This time the scientists have come up with a robot in triangular bots which can be snapped together. This allows the folding of the modular robot into different shapes and sizes. Switzerland’s National Centers of Competence in Research (NCCR) team has developed the origami robot. Dubbed the Mori robot by the research team, this robot can be increased or decreased in size according to the scientific requirements. 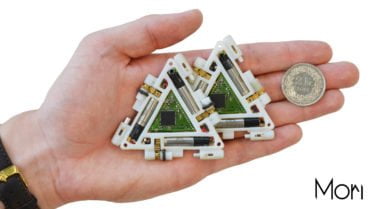 The individual modules of this robot are triangular in structure, with 6mm thickness, 70mm width, and are 26g in weight.

Structure of the origami robot

This isn’t the first time when the technique of origami was useful for the creation a robot. But no scientist has ever created a combination of an origami robot with a modular one. The plus point of origami robots is that their shape is adjustable by folding these thin structures. One can fold such structures and produce a single robot. On the other hand, a modular robot assures better efficiency. It uses various individual entities which enable reconfiguring the overall shape and become capable of carrying out diverse tasks.

Both these types of robots have their own advantages. The origami ones are light-weight and compact but they lack in functionality. This depends on shape and size of the robotic sheet and the number of folds created. Modular robots are contradictory to this. In terms of configuration and shape, they are extremely flexible. But they aren’t as sleek and light as the origami robot. Putting together the best of the technologies of both these robots, the researchers have come up with the Mori robot. The individual modules of this robot are triangular in structure, with 6mm thickness, 70mm width, and are 26g in weight. The connection is with the help of sensors, actuators, and an onboard controller. 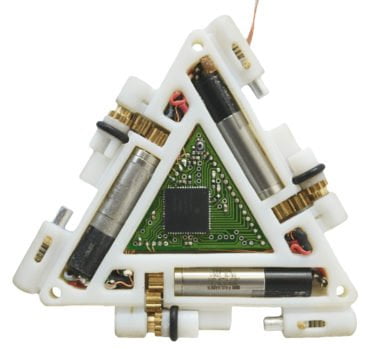 Putting together the best of the technologies of both these robots, the researchers have come up with the Mori robot.