Pen down your Imagination on the Microsoft Surface Studio

Initially known as the manufacturer of computer software, Microsoft has decided to expand its horizon. Soon after Satya Nadella took over this Cupertino giant, he stated that the company needs to produce products wanted by the consumer, instead of just basic necessities. The Microsoft Surface Studio isn’t the cliché boring black or beige computer but has a sleek yet flexible design. One would definitely want to ditch his everyday laptop to enjoy working on this PC. The main selling point of this computer is that it can instantly transform from a desktop to a studio catering to the needs of a modern artist. This sleek design reminds one of the iMac computers by Apple, indicating that the Surface Studio aims to compete with the slender iMac range.

Microsoft Surface Studio has a flexible yet sleek design.

The first thing one will notice on sighting this desktop computer is its remarkable screen which can be used as a monitor as well as a giant tablet due to its touch-sensitive nature. This 28-inch PixelSense display makes everything appear lifelike as one can’t spot pixels in the picture. The contents on the screen are clear even if there is a paper-like obstruction between the screen and the individual. It consists of a 4500 x 3000 (192 dpi) resolution in coordination with its 3:2 aspect ratio. The monitor is reflective, glossy and is the heart of the computer on getting used to its big size. The display is extraordinarily thin at 13mm as it also Pressure-sensitive surface pens.

Microsoft has used a zero-gravity hinge in its monitor. It helps to prop up or adjust the angle of the screen at just the touch of a finger. Along with its adjustability, the user can draw or use the screen at any angle. This is possible due to the resistance provided at the back of the screen. The highlight of the Microsoft Surface Studio is its drawing board mode. To attract illustrators or artists, the PC offers this special mode to create artworks in a digital format. The minimum angle of the screen is 20 degrees, therefore, it doesn’t lie flat on the desk. But this angle is convenient enough to draw on. 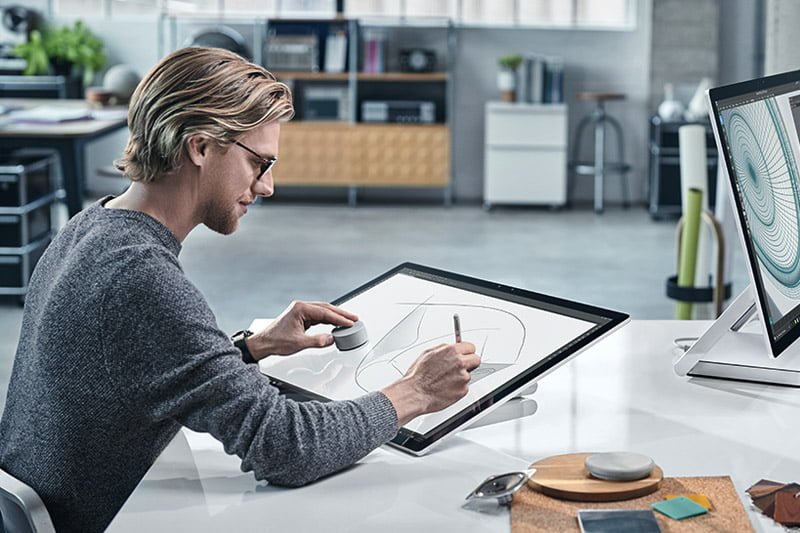 The drawing board mode contains almost all the features needed by an artist.